Texas plans to withdraw from US refugee resettlement programme Since 2011, there have been 1,104 Syrian refugees resettled in Texas
By
MEE and agencies

Texas gave notice on Wednesday that it plans to withdraw from participation in the US Office of Refugee Resettlement programme, citing security concerns after failing in federal court to halt the inflow of Syrian refugees into the state.

The Texas State Refugee Coordinator sent a letter to the agency, giving 120 days notice of its intention to withdraw, charging that the programme is riddled with problems that present security risks, Republican Governor Greg Abbott said in a statement.

"Despite multiple requests by the State of Texas, the federal government lacks the capability or the will to distinguish the dangerous from the harmless, and Texas will not be an accomplice to such dereliction of duty to the American people," Abbott said.

Texas, a bellwether state for conservative policies, has seen other Republican-led states follow its lead in challenging the Obama administration's refugee resettlement plans in and out of the courts.

"The security vetting for this population - the most vulnerable of individuals - is extraordinarily thorough and comprehensive," US Secretary of State John Kerry and US Homeland Security Secretary Jeh Johnson said in a joint, five-page letter to Abbott in November, which outlined the process.

The Office of Refugee Resettlement said in a statement its services to help integrate newcomers into US society are only provided after they complete stringent security screenings.

A Texas withdrawal is not expected to impair the work of private relief groups resettling refugees in the state.

The refugee resettlement programme is a federal initiative and the government is expected to fight the state of Texas on its decision.

As the State steps away from its role, the Catholic Church in Texas commits to ongoing work for refugees.
https://t.co/pK9VmvDjaB

Since 1 January, 2011, there have been 1,104 Syrian refugees resettled in Texas, according to the US State Department-affiliated Refugee Processing Center. That is less than the 1,610 people resettled in California and the 1,515 in Michigan.

The Obama administration said on 29 August that it would meet its goal of admitting 10,000 Syrian refugees during the current fiscal year a month ahead of schedule and was working with Congress to increase the target by several thousand during 2017.

US admission of Syrian refugees has been a hot-button issue in the 2016 presidential race.

Republican nominee Donald Trump is against allowing Syrian refugees into the US, having described them as a “Trojan Horse” for terrorism.

His son, Donald Trump Jr., compared refugees with a bowl skittles that has a few candy pieces that “would kill you”.

The ongoing civil war in Syria has led to a flood of refugees. The US has offered refuge to far fewer than many of its allies. Germany has taken in more than a million refugees from Syria, North Africa and Asia in the last year, while Canada admitted almost 30,000 between November last year and 1 May. 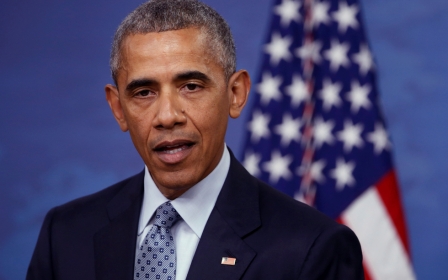 Refugees
Obama draws pledges from 50 countries to take in 360,000 refugees 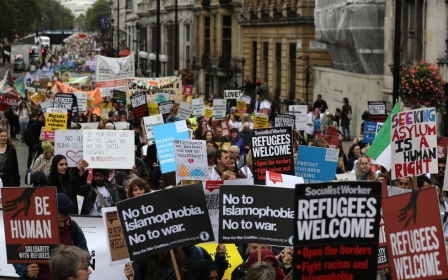