Is there hope for Israel's Jewish-Bedouin industrial park?

The first Jewish-Bedouin industrial park in Israel is being built in Southern Israel, but will it be more of a force for unity and peace or just reveal the deep divisions

When I heard about Idan Hanegev, the first joint Jewish-Bedouin industrial park in Israel, I was intrigued. Idan Hanegev is being established in southern Israel with the aim of bringing much needed employment opportunities, income and hope to this desert region.

Three partners are involved. The city of Rahat, suffering from a low socio-economic status, is the Bedouin-Arab partner. The wealthy regional council of Bnei Shimon is the main Jewish partner and they are joined by a Jewish town as the smaller third partner.

Sigal Moran, head of the Bnei Shimon regional council, was quoted in the press stating that although the land where the park is being built belongs to Bnei Shimon, she had agreed that income from the property tax on the factories will not be divided equally between the three partners. The bigger portion will go to Rahat since "no one wants poor neighbors."

The project sounded like a breath of fresh air. Here is an example of constructive cooperation between neighbors and a good way to improve Jewish-Arab relations. The Bedouins who I visited had been the original owners of the land until 1948, when most of their community was deported and most of their land was confiscated and nationalised.

Rahat is a result of the State's most ambitious resettlement project, undertaken in order to concentrate Israel's Bedouin citizens into smaller defined regions. Created by Israel in 1971, Rahat is now the poorest city in the country, with 60,000 Bedouins, living on 4,839 acres of land.

Bnei Shimon, on the other hand, is a Jewish regional council with 8,000 residents living on 108,726 acres of land. Jewish regional councils, similar to counties, govern over small farming communities. When the state was established and Palestinian land was confiscated, these councils were seen as the most loyal to the newly formed government and they were given the responsibility of "safeguarding" the open lands. Until today they are approximately 10% of the population and the custodians of 85% of the land in Israel. This is an organising principle, much like a natural law, which has not been overtly questioned for many years.

I arrived at the municipality building of Rahat and was seated in a simple waiting room. On the wall was a large beautiful photo of an old woman sitting on the floor and preparing stuffed zucchinis in a traditional Arab way. Next to this nice gesture of appreciation for the old generations and their wisdom is an enlarged formal certificate in Hebrew with the heading: "Rahat: The biggest Bedouin city - a pioneer in modern Bedouin settlement."  It was signed eight years ago by the prime minister and by a few of the ministers who came to support the growing town.

But it is hard to find evidence on the ground that reflects this impressive declaration of support from the government. 65% of Rahat's residents are under the age of 20. Only 25% of the high school students complete their matriculation exams (the average in Israel is 48%) and the city suffers from 34% unemployment.

The first words that Talal al-Karnawi, the mayor of Rahat, said to me were: "We will not be the wood choppers of this region forever. The joint industrial park will be a source of income for the city and an important source of employment opportunities."

The biggest industry at this early stage of development is Soda Stream which will employ approximately 1,000 people. Most of the entrepreneurs are small Bedouin businesses, a third are Jewish and 4% are joint ventures of Jews and Bedouin. But make no mistake, the biggest employers will be Jewish-owned businesses. Al-Karnawi is pragmatic. The poor have to be. He agreed that the name of the joint park will be in Hebrew, because “that will attract more investors and the big investors are Jewish.”

He knows that the Bedouin will mostly be employed as simple laborers while the Jews will be in professional and managerial positions. But he believes that slowly that will change and “we will integrate.” He does not see any need for guidelines ensuring equality between Jews and Arabs in the work places that are established. "It is not up to us to interfere. The industrialists need their freedom.”

Other leaders in Rahat were less pragmatic. One of them even claimed that the whole park is a bluff. The lots are too expensive, the Jews will build the big industries and we will end up working for them. They might as well have built the whole park alone. We are on the board of directors as a token.

Dr Atwa al-Hag Abou Anzeh, a lawyer and community leader, was particularly critical.  He said that "since the city was established it was clear that the State only wanted to concentrate us and take our land. When the Bedouin leaders at that time asked about employment, the government said that 'time will heal everything.' It is the Zionist way. They look down on us. Their attempts to 'help' are insults to our intelligence. You cannot create a partnership between the poor and the rich. You must first provide the poor with conditions to leave the circle of poverty. We cooperate because we are desperate. We don’t believe in this kind of partnership but we are desperate."

The ethos of the Bnei Shimon regional council is that they are hard-working, they know how to seize opportunities, they are well-organised and they live a simple life. All of this seemed to be true. Driving through Bnei Shimon I did not see overt symbols of wealth. They invest in education and in the welfare of their residents. They are keen on creating business opportunities with all of their neighbors, especially with Rahat. But creating those opportunities stops short of the idea of actually returning land taken from the Bedouins.

As Moran, Head of the regional council put it, "This might sound patronising but I can rely on myself and on our integrity.  If the land (of the industrial park) stays under our jurisdiction it will be managed well."

The Jewish partner is not blind. They recognise the inequality and have initiated a symbolic division of income from taxes on the park that favors Rahat (44% for Rahat, 39% for Bnei Shimon and 17% for the third partner). They believe in the joint vision and they are determined to make it work. At the same time they see the existing power relations as natural, inevitable and not their responsibility. And they are partially right. Land reforms are the responsibility of the State.

Though this particular kind of partnership has never been attempted before in Israel, Idan Hanegev is part of a growing trend of projects that advocate distributive justice, but judging by the outcomes, I wonder if the trend is any more than an aspirin or a smoke screen.

In recent years poor Jewish towns with a large population of Jews from North African countries have also contested the “natural” allocation of land. Considering their lack of success at advancing major change, it is almost impossible to imagine Palestinian citizens making any progress at all in advancing reforms in land distribution.

Moran explained that safeguarding the land means making sure that the land is not environmentally abused and that all construction on it is legal. Moran stresses one part of the picture, perhaps because someone else is doing the "dirty" work for her.

The government, on its part, has been particularly busy in recent years constructing a narrative about the Bedouin taking over the open spaces.  They are depicted as "trespassers and land-grabbers." This narrative is used to justify a legislative process in parliament that will probably conclude in a law that will forcefully evict even more Bedouins from villages, concentrating them into a number of townships such as Rahat.

All of the people who are promoting the park want to create jobs and are especially concerned with employment opportunities for the Bedouin women. Moshe Paul, the director of Idan Hanegev is Jewish. He hands me his business card in both Hebrew and Arabic and describes the day to day practices in Idan Hanegev. They are creating a website in Hebrew and in Arabic. The newsletter includes greetings to the Muslims on their holidays and he will never serve refreshments in board meetings during Ramadan. He has also advised Soda Stream to build a prayer house for Muslims in the plant and that is being done.

These are small gestures and simple acts of recognition toward a minority group, and they are rare in the Israeli public sphere. Hospitals and universities, for example, which are public institutions that employ and serve both Jews and Arabs, fail to give recognition to the Arabic language, to religious needs and to the Muslim calendar.

Paul spoke at length about future plans for a hospital and for a multi-cultural college. Paul says he wants the Jews and the Bedouin to integrate. He believes that the college will help bring the Bedouin community to the 21st century - especially the women who will be emancipated. They will be able to influence their husbands not to marry a second wife. Eventually they will have fewer children and they will make sure they get a good education. That is the appropriate culture for the 21st century, he explained.

Sociologist Dr. Sarab Abu Rabia-Queder stresses that employment and education can help women with social mobility, but when it comes to the Bedouin, there are other factors to consider. There is institutional discrimination toward Arabs and there are tribal traditions. Bedouin suffer from discrimination by the State. The women in low income jobs suffer from low pay, instability in employment and unlawful employment.

Although employment is generally a source of power, it is a complex issue. Today women are working. 60% of the teachers in the city are women and there is no indication until now that this has lowered the high birthrate or has had any affect on the rate of polygamy. And even if it did, Abu Rabia-Queder tells us, "there is one thing which is no less disturbing than polygamy and a high birthrate - and that is when Jewish Israelis interfere and tell us how to live our lives. We don’t trust their motives," she says, "they are preoccupied with demographics."

Like an archeologist I unraveled layers of discourse in the desert sand: The first is the narrative of both Jewish and Palestinian leaders – a narrative of realpolitik, economic growth, practical local solutions and good common sense. The second, deeper narrative is that of historical rights, indigenous rights and State responsibility. The third layer speaks of cultural inferiority and superiority.

This is where I heard the Jews hint that the project is better off in their hands. This is where I heard anger from the Bedouin that said they know that the State and their partners think that they are not good enough and that it is almost impossible to make a change. It is the layer that identifies power relations - a layer of unspoken historical truths. As I dug I became more and more anxious that touching the deep layers may lead to the collapse of everything we see on the ground. With the anxiety came clarity and questions: can a joint Jewish-Palestinian cooperation truly succeed if it is built on denial? Will the community leaders that lead this huge project allow themselves to dig, unravel and reconstruct the layers of injustice in their region? And can colonial structures and patterns make way for equal relations? 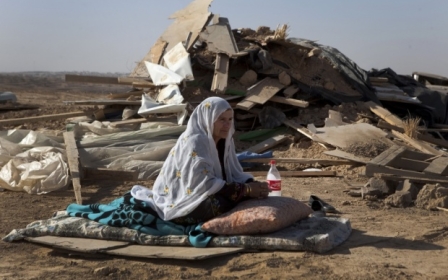 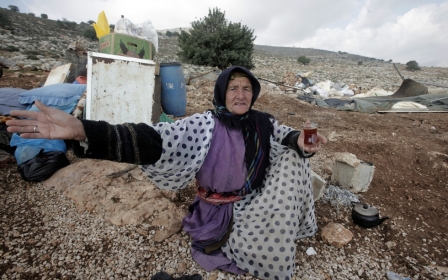