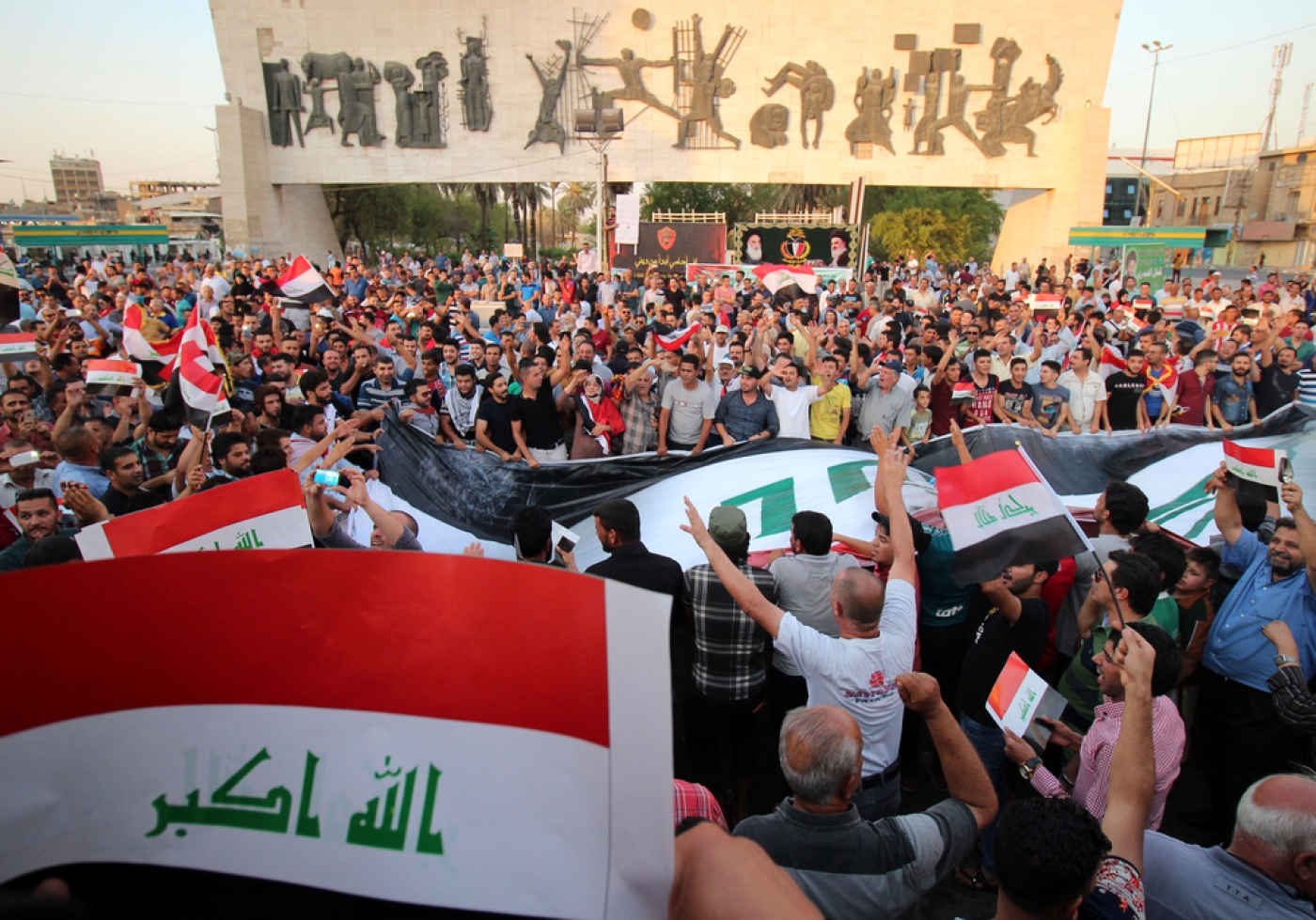 Iraqis take part in a demonstration in support of Iraqi Prime Minister Haider al-Abadi's reform plan at the Tahrir Square in Baghdad on August 9, 2015 (AFP)
By
Suadad al-Salhy

BAGHDAD - Thousands of Iraqis took to the streets across the country on Sunday evening to show their support for Prime Minister Haider al-Abadi for launching a campaign aimed at reforming his government and combating corruption.

In response to the massive demonstrations that took place in Baghdad and in the southern Shia-dominated provinces, al-Abadi presented a reform package that could deprive lawmakers and officials of most of their privileges.

Al-Abadi's proposal includes aiming to limit financial and administrative corruption, relieving the burden on the Iraqi treasury and providing some money to pay the delayed salaries of governmental employees.

Twelve years after the US army toppled Saddam Hussein, and despite the ascension of Shia Muslims into power through the ballot box, Iraqis continue to suffer from a lack of basic services, including electricity and clean drinking water.

The power-sharing political system and decentralisation - adopted by Iraq’s political parties after 2003 - have provided political cover for government officials in federal and local positions and have shielded corrupt officials from accountability.

"We need to combat the corruption and save every single Iraqi dinar and get it back to the treasury of state because, the finance situation of the state is very critical," Massoud Haider, a member of the finance parliamentary committee, told the Middle East Eye.

"Cancel some ministries and positions and integrate others will save huge money to the (state) treasury," said Haider.

Al-Abadi, a moderate Shia, revealed his reformist plan on late Saturday, a day after Grand Ayatollah Ali al-Sistatni, the most revived Shia cleric in Iraq and the head of Najaf Marjiya (clergy) announced his full and open support for Abadi's campaign against corruption.

In Baghdad, protesters flocked to Tahrir Square carrying Iraqi flags and posters of Sistani and Abadi. Several banners read "the sun shone on the darkness of the corrupted people," and "people want a government of institutions not a government of guns".

The protestors were chanting "today, we will sweep all the corrupted (people)".

"I am here to support Abadi to go ahead in his campaign to make reforms and carry out our demands," Mohammed Mahmood, a 26-year-old protestor who was videoing his friends while they were chanting and waving Iraqi flags in Tahrir Square.

"I will defend him (Abadi) and support his government as long as he put his hand at the hands of people and save us from this sabotage," Mahmood added.

Iraqi has spent around $800bn since 2004 to rehabilitate the country’s infrastructure but significant improvements have yet to be seen on the ground due to large-scale corruption. The sharp decrease of the global oil prices has intensified the finance shortage the budget suffers from since early this year.

Al-Abadi's suggested reforms include cancelling several ministries and independent commissions while merging others, freezing the finance privileges of all officials, retraining policemen so they can fight the Islamic State group, limiting the number of the advisors of each governmental branch (parliament, cabinet and president), reactivating foreign investment and fixing the energy sector.

One of al-Abadi’s key reforms is cancelling the positions of vice president and three deputies to the prime minister. Based on the power-sharing political system that Iraqis adopted since 2004, the president (a Kurd) has three vice-presidents, a Sunni Muslim and two Shias, while the Prime Minister (a Shia) has three deputies, a Kurd, a Sunni and a Shia.

The president’s power is largely ceremonial, but the president’s deputies have real sway. A copy of the 2015 Iraqi budget shows that the personal annual salaries of the three vice-presidents and their 7,000 body guards costs the Iraqi treasury more than $60mn.

"I came to support Abadi's decision (reformations) which is to fire the three vice presidents and the corrupted officials and reform the political process," Amar Jassim, a 28-year-old protestor told MEE in Tahrir Square.

"We all took to the street without recognising who is Sunni and who is Shia to protect our future and our children's future," Jassim said.

Two of the current three vice-presidents, Nuri al-Maliki (the former prime minister) and Osama al-Nujaifi (the former speaker) have been blamed by many Iraqis for failing to secure Mosul from Sunni militants last summer, while Iyad Alawi (the first Iraqi prime minister after 2003) is blamed for his "suspected" relationship with Saudi Arabia.

The cabinet has approved the prime minister’s proposed plan this afternoon but it needs to be approved by parliament for it to be binding. Most of Iraq's top politicians are afraid to express their real positions out of fear of angering the demonstrators.

Political analysts have said that Abadi's plan will not face serious problems in parliament.

"All the political blocs believe now that the political process is passing through its worst stage and it could collapse any day because of the corruption, Daesh (IS) and the foreign intervention, and Abadi's step towards the reformation could save the situation," Yazen al-Jobouri, an independent political analyst told MEE.

"Abadi is the only one now who is able to make the change; he has the support of the people, Marjiya and the international community and all the political blocs understand this very well," said Jobouri.