Anti-Houthi protests in Sanaa, 26 January 2015 (AFP)
By
MEE and agencies

Thousands of protesters took to the streets of the Yemeni capital of Sanaa and the major coastal city of Taiz on Saturday to protest against the establishment of a "security commission" set up by the country’s Houthi minority.

Smaller protests took place in the western port town of Hudaida, the inland cities of Dhamer and Ibb, as well as the southern capital Aden, Al-Jazeera reported.

Tensions remain high in Sanaa, with Houthi militias and guards reportedly out in force, after an improvised bomb exploded outside the Republican Palace, also known as the Presidential Palace, wounding three Houthi militiamen who were guarding the building, eyewitnesses told Reuters.

The commission was announced earlier in the day,  just 24 hours after the Houthis officially dissolved parliament and created a "presidential council" that they said would govern for two years.

The security commission "will lead the country's affairs until the establishment of a presidential council", said the statement published by the official Saba news agency, which the Huthis seized in January.

It added that the commission would be chaired by General Mahmud al-Subaihi, who had been serving as defence minister under former president Abd Rabbuh Mansur Hadi. Hadi stepped down late last month after Houthis stormed the Presidential Palace.

Subaihi’s appointment and his presence alongside Houthi leaders when they announced their takeover on Friday was met with distrust from his entourage, considered close to Hadi.

The head of his cabinet, Abdel Aziz Mansour, suggested the general had been "compelled by force to appear alongside" the Houthi leaders.

"We lost contact with him and we are concerned for his life," he told AFP.

On Friday the Houthis said that they would set up a national council of 551 members to replace parliament, in a move designed to "defend the nation".

The announcement, dubbed a "constitutional declaration", said that a five-member presidential council would be established and tasked with forming a transitional government to rule for two years.

The move came after a Wednesday deadline to resolve the political crisis, set by the militia, passed without a deal.

Critics of the Shiite Houthi movement were quick to denounce the "coup" with protests also breaking out on Friday in much of Yemen.

Sunni tribes in the eastern, oil-rich province of Marib, which some analysts believe the Houthis could be planning to march into soon, cried foul.

"We reject the authors of this coup in Sanaa," Sheikh Saleh al-Anja, a spokesman for the influential Marib tribes, told AFP.

Youth activists, who played a key role in the 2011 uprising that forced out veteran president Ali Abdullah Saleh, released a statement saying they "reject the hegemony of the Houthi militia".

Al-Jazeera's Jamal Elshayyal, reporting from Aden, told the channel that resentment was running high and that the development could have "huge regional implications".

"The Houthis have very good ties with Iran and have allegedly been receiving both material and political backing from Iran," he said. "Popularly speaking, the Houthis are a Shiite minority, and there is a lot of opposition to them from the Sunni majority.”

Aden has long been home to a separatist movement that would like to see South Yemen regain independence. North and South formally merged in 1990 but the union has been a rocky one, with two sides fighting a short but bloody civil war in 1994.

"This is an opportunity for them [Aden] to advance their cause and increase calls for separation,” Elshayyal said.

The United States, which has long backed Hadi’s government and lavished it with weapons to try to fight the al-Qaeda insurgency in the country, also spoke out against the "presidential council".

The six-nation Gulf Cooperation Council (GCC) went even further and on Saturday condemned the "coup".

"The Huthi coup marks a grave and inacceptable escalation... and endangers the security, stability, sovereignty and territorial integrity of Yemen," said a statement issued at GCC headquarters in Saudi Arabia.

The UN Security Council on Friday raised the prospect of possible sanctions. Liu Jieyi, president of the Security Council, said the body's 15 members were ready to "take further steps" if negotiations to halt the unrest were not resumed "immediately".

The Houthis, who make up around a third of Yemen’s population, first overran the capital in September when they launched mass protests and managed to take control of various government institutions.

While the UN managed to broker a deal, tensions have remained high. They flared up last month when the Houthis abducted a presidential aide and stormed the Presidential Palace.

Subsequent Houthi calls for negotiations, which were backed by Ali Abdullah Saleh but rebuffed by all other parties, failed to reach a compromise. 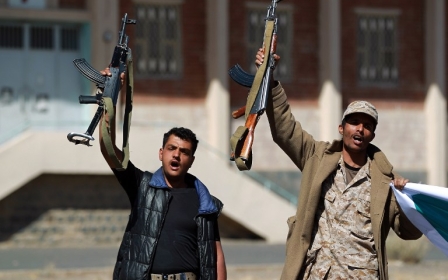 Inside Yemen
Faced by deadlock, Yemen's Houthis on verge of seizing power 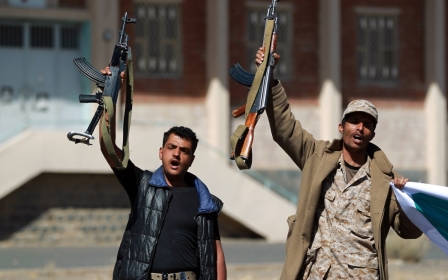 Inside Yemen
Clashes erupt in Yemen as Houthi deadline passes