Three Palestinians were shot dead on Monday after allegedly carrying out a shooting and a car-ramming targeting Israelis near Hebron in the occupied West Bank, according to the Israeli army.

"Two assailants opened fire at pedestrians waiting at a bus stop at the entrance of Kiryat Arba (near Hebron). Forces guarding the area responded and shot the assailants, resulting in their deaths," a military statement read.

"Moments later, in an additional attack, a vehicle rammed into a military vehicle responding at the scene. Forces responded to the immediate danger and shot the assailant, resulting in his death."

A military spokeswoman said the assailants used a pistol and a submachine gun.

Israeli security forces have noted a recent surge in shooting attacks in Jerusalem and the West Bank following five-and-a-half months of Palestinian attacks.

Since 1 October, a wave of violence has resulted in the deaths of at least 191 Palestinians, 28 Israelis, two Americans, an Eritrean and a Sudanese, according to an AFP count.

Most of the Palestinians were killed allegedly carrying out knife, gun or car-ramming attacks, while others were killed in clashes with Israeli security forces.

On Sunday, a 14-year-old Palestinian boy was seriously injured after being shot in the chest by Israeli security forces during clashes in al-Mazraa al-Gharbiya village, northwest of Ramallah in the West Bank, medical sources told the Palestinian Maan news agency.

Many analysts say young Palestinians are fed up with Israeli occupation, while Israel blames incitement by Palestinian leaders and media as a main cause of the violence. 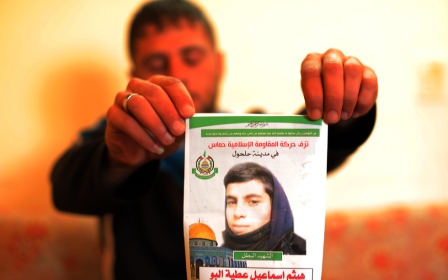