Tillerson calls for dialogue between Iraq and Kurdistan US Secretary of State Rex Tillerson urged the Iraqi government and the Kurdistan region on Monday to resolve their conflict over Kurdish self-determination and disputed territories through dialogue.

Tillerson made the call on Sunday at the start of a meeting in Baghdad with Iraqi Prime Minister Haider al-Abadi, who in turn defended the role of the Iraqi paramilitary force against criticism made by the secretary of state.

Abadi told Tillerson the Popular Mobilisation force "is part of the Iraqi institutions," rejecting accusations that it is acting as Iran's proxies.

"Popular Mobilisation fighters should be encouraged because they will be the hope of the country and the region," he said.

A few hours earlier on Sunday, Abadi's office published a statement rejecting Tillerson's comments. "No party has the right to interfere in Iraqi matters," it said.

Tillerson said in his opening remarks on Monday: "We have friends in Baghdad and friends in Erbil and we encourage all parties to enter into discussion ... and all differences can be addressed," he said, referring to the Iraqi and Kurdistan region capitals.

The US administration sided with Abadi in rejecting the validity of the referendum held last month in the Kurdish region, which produced an overwhelming yes for Kurdish independence.

The administration also called on the two sides to avoid further escalation, after Abadi retaliated against the Kurdish vote by isolating the Kurdistan region and ordering his troops to seize the oil city of Kirkuk from Kurdish fighters.

"We don’t want to enter into any battle against any Iraqi component," Abadi said. "When we entered Kirkuk we sent a clear message that the citizens of Kirkuk are important to us."

It was Tillerson's second meeting with Abadi in as many days. After Sunday's meeting, alongside Saudi Arabia's King Salman, Tillerson said it was time for Iranian-backed militias that had helped Baghdad defeat the Islamic State (IS) group to "go home".

Abadi and Tillerson both attended a landmark meeting between Saudi and Iraqi leaders in Riyadh on Sunday aimed at upgrading strategic ties between the two countries and countering Iran's regional influence.

On the crisis between Baghdad and Iraqi Kurdistan, the US State Department on Friday called for Iraqi federal forces to limit their "movements" in areas disputed by the two sides to avoid more violence.

Washington, which also backed Baghdad against IS, is concerned Iran will use its increased presence in Iraq, and in Syria where it supports President Bashar al-Assad, to expand its influence in the region.

Iran's influence in Iraq, where the population is also predominantly Shia, has grown since the US invasion of 2003 that overthrew dictator Saddam Hussein, a Sunni. 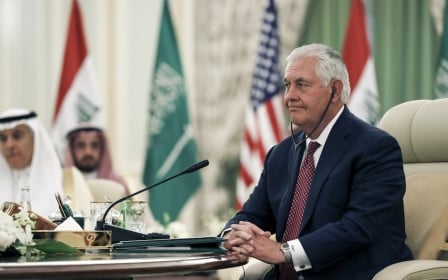