Two MPs failed to disclose during debate on Saudi human rights that they had been on $4,000 junkets to Riyadh in April Two Conservative MPs who pushed a "softly, softly" policy on Saudi Arabia during a parliamentary debate had accepted trips to Riyadh where they met King Salman, Middle East Eye can reveal.

Helen Whately MP and Simon Hoare MP did not initially disclose that they had each accepted the equivalent of $4,000 in hospitality from the Saudi government after they spoke in defence of the kingdom during a debate in Westminster.

The debate followed an urgent question by Liberal Democrat Tom Brake over fears of the imminent execution of 14 men for protest-related offences, including a number who were children at the time of their alleged offences.

The group includes a disabled man and a promising student who was arrested on his way to study in the United States.

Mujtabaa al-Sweikat, who was 17 at the time, was arrested on his way to the airport in Dammam in 2013, while trying to travel to the US to attend college.

Sweikat, who had been accepted to Western Michigan University (WMU), was sentenced to death last year; the verdict was upheld by the country's high court in May.

According to the American Federation of Teachers (AFT), on Saturday he was moved to Riyadh, where executions usually take place.

Both Whately and Hoare both used the debate to defend Saudi Arabia, despite its dire human rights record.

The Tory junket saw the two backbenchers travel to Saudi Arabia for three days in early April as part of a "parliamentary fact-finding" visit paid for by the Saudi Arabian ministry of foreign affairs.

They met King Salman during the visit, which took place as the British prime minister, Theresa May, carried out a controversial trip to Jordan and Saudi Arabia.

Send in the gunboats

Hoare used his intervention in Monday's debate to bemoan the collapse of British "imperial power" and to call for no more than a "quiet conversation" with Saudi Arabia over human rights concerns.

He said: "Given the fact that - alas, perhaps - we are no longer an imperial power able to send a gunboat to enforce our view of the world, will my right honourable friend confirm that, in his considerable experience in the foreign office, a quiet conversation to make our case and set out our views is far more likely to be effective than shouting at people across the railings?"

Whately then urged parliamentarians to "appreciate that the government of Saudi Arabia are taking to steps to improve their actions on human rights, and particularly to improve the opportunities and rights of women in Saudi Arabian society".

Her comments came despite concerns from rights groups over Saudi Arabia's deteriorating human rights record, and what one Labour MP called "universal condemnation from all sides" over the planned executions. The MP also labelled Whately a "serial apologist for GCC regimes".

Saudi Arabia executed 154 people in 2016, according to Human Rights Watch.

The kingdom consistently denies it has a poor human rights record, and last year told the UN Human Rights Council that it "fights torture in all its physical and moral manifestations".

The latest Register of Members' Financial Interests, published by House of Commons officials, shows that Whately and Hoare each accepted hospitality worth £3,187, including hotels and flights.

While neither Whately or Hoare broke House of Commons rules on transparency and both subsequently told the House they had visited Saudi Arabia, John Bercow, the Speaker of the House of Commons, warned them that it would be "prudent" to declare interests, particularly when "there is a question of outside financing and an outside body".

The Register of Members' Financial Interests shows that eight Conservative MPs in total accepted trips to Saudi Arabia as guests of the foreign ministry or the Shura Council. The other Conservative MPs were James Cleverly, Seema Kennedy and Rebecca Pow, who travelled with Hoare and Whately, and Daniel Kawczynski, Andrew Stephenson and Charlotte Leslie.

Kawczynski, who was once labelled the "honourable member" for Saudi Arabia, Stephenson and Leslie each received more than £6,000 for a five-day visit to the kingdom in April to "strengthen British-Saudi Arabia diplomatic relations".

Leslie lost her seat in the 2017 general election and has since been appointed the Director of the Conservative Middle East Council.

According to the records, no opposition Labour or Liberal Democrat MPs accepted hospitality from Saudi Arabia.

The visits by Conservative politicians signal an intensification of the oil-rich state's lobbying efforts, which comes amid increasing criticism of its domestic human rights record and allegation of war crimes in Yemen.

Theresa May's government has a working parliamentary majority of just 13 votes, meaning Tory backbenchers' views on Saudi Arabia could be key in any vote on government foreign policy.

During the debate on imminent Saudi executions, foreign office minister Alistair Burt said: "The UK government opposes the use of the death penalty in all circumstances and in every country including Saudi Arabia, especially for crimes other than the most serious and for juveniles."

Maya Foa, director of rights group Reprieve, welcomed Burt's comments, but said: "His words stand in stark contrast to the deafening silence from Theresa May on this issue... [the prime minister] must now pick up the phone to King Salman and the new crown prince, make clear that the UK opposes the beheading of children and protesters... and call for an immediate halt to the 14 imminent executions."

Human rights groups have long called for the British government to take a stronger line with Saudi Arabia over human rights concerns.

Saudi executions of 14 protesters incl 2 juveniles must not happen. Clear violation of int'l law by a state PM is proud to call a partner.

"The British government has historically adopted a softly, softly approach with many countries on major human rights issues including Saudi Arabia.

"If the latter does not want a fiercer public debate with staunch criticism, then perhaps it should respond more constructively to the quiet remonstrations about human rights issues and to demonstrate real progress," Chris Doyle, director of the Council for Arab-British Understanding told MEE. 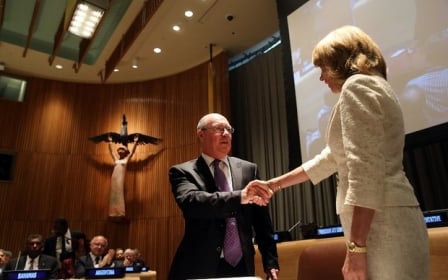