US President Donald Trump has instructed American naval forces to fire on any Iranian ships that "harass" its vessels at sea.

"I have instructed the United States Navy to shoot down and destroy any and all Iranian gunboats if they harass our ships at sea," Trump wrote.

Last week, the US military said that 11 Islamic Revolutionary Guard Corps Navy (IRGCN) speedboats had come "dangerously" close to US ships, including the guided-missile destroyer USS Paul Hamilton, in the Gulf.

According to a statement released by the American military, the Iranian vessels approached six US military ships while they were conducting integration operations with army helicopters in international waters.

At one point, the Iranian vessels came within nine metres of a US Coast Guard cutter, the statement said.

The US ships issued several warnings through bridge-to-bridge radio, blasts from the ships' horns and long-range acoustic noise maker devices. The Iranian ships left after about an hour, the statement added, calling the move "dangerous and provocative".

On Sunday, Iran's navy acknowledged the incident, saying that the US sparked the tense encounter, without providing additional details.

According to the IRGCN, its forces were conducting a drill when they were met by "provocative actions of the United States and their indifference to warnings".

In its statement, the IRGCN urged American forces to follow "international regulations and maritime protocols" and to "refrain from any adventurism and false and fake stories".

"They should be assured that the Revolutionary Guard navy and the powerful armed forces of the Islamic Republic of Iran see the dangerous actions of foreigners in the region as a threat to national security and its red line, and any error in calculation on their part will receive a decisive response," the IRGCN said in its own warning.

Contrary to the US military report, the Iranian statement said that the Americans were the ones to withdraw from the confrontation.

Earlier on Wednesday, Iran said that it had put a military satellite into orbit for the first time, a surprise move that comes amid ongoing tensions with the United States.

The launch of the satellite, named "Noor," or light, has not been independently confirmed, the New York Times reported.

The State Department and the Pentagon did not immediately respond to Middle East Eye's requests for comment.

Former national security adviser John Bolton, widely seen as a war hawk, warned on Wednesday that Iran's reported launch of the satellite is "proof" that the United States is "still not applying enough pressure" on Tehran. "Deterrence has not been restored, & coronavirus is not slowing down the ayatollahs," Bolton said on Twitter, warning that Iran seeks to develop intercontinental ballistic missiles capable of carrying nuclear weapons.

In recent months, Iran announced that it had abandoned all limitations set by the Obama-era multinational nuclear deal, from which the Trump administration unilaterally withdrew in 2018.

Since then, Washington has initiated a "maximum pressure" campaign on Tehran, regularly announcing new additions to already crippling sanctions against the country.

The move has sparked a series of escalating reprisal attacks launched by both countries. Military tensions came to a head in January when a US drone strike in Iraq killed senior Iranian general Qassem Soleimani and Iraqi militant leader Abu Mahdi al-Muhandis.

Iran countered by firing ballistic missiles at an Iraqi base housing American forces, sending more than 100 US personnel to hospital with traumatic brain injuries. 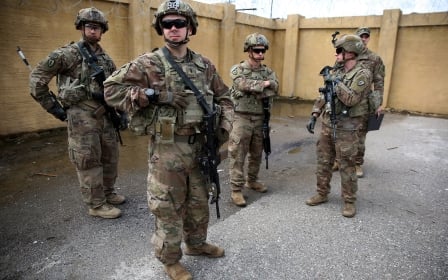 Covid-19
War games in the time of coronavirus
Belen Fernandez