A delegate holds up a sign that reads "Trump is Americas Great Ball of Fire" during the fourth day of the Republican National Convention on 21 July 2016 at the Quicken Loans Arena in Cleveland, Ohio (AFP)
By
MEE and agencies

Donald Trump promised fearful Americans that "safety will be restored" if he is elected president, as he accepted the Republican Party's White House nomination on Thursday.

"I have a message for all of you: The crime and violence that today afflicts our nation will soon come to an end," Trump said.

In a speech that evoked recent racially-tinged shootings and seemingly indiscriminate terror attacks, Trump presented himself as the nation's law-and-order candidate.

"Americans watching this address tonight have seen the recent images of violence in our streets and the chaos in our communities," he said.

“Only weeks ago, in Orlando, Florida, 49 wonderful Americans were savagely murdered by an Islamic terrorist. This time, the terrorist targeted our LGBT community: no good, we are going to stop it.”

His tough-on-crime tone is reminiscent of Richard Nixon's election-winning strategy in 1968, and he contrasted the dark mood with a bold promise for better times come inauguration day.

Trump's acceptance speech was his first major primetime address to the nation, and an opening salvo of November's general election.

Donald Trump criticised the Iran nuclear accord, saying "we gave back 150,000 billion dollars and we got back absolutely nothing".

"It will go down, in history, as one of the worst deals ever negotiated," he added.

In regards to the Syrian conflict, candidate Trump said the war was a "humiliation" for US President Barack Obama.

"Another humiliation came when President Obama drew a red line in Syria, and the whole world knew it meant absolutely nothing."

The eccentric property magnate then shifted his attention to US policy in Libya, claiming that "America is far less safe, the world is far less stable than when Obama made the decision to put Hillary Clinton in charge of America's foreign policy".

After Trump's condemnation of Clinton, the crowd at the convention erupted with chant of "Lock her up".

He replied "let's defeat her in November".

Trump also implied that Clinton helped spawn and create the Islamic State (IS) group as well as the different crises happening in the Middle East.

"Libya was stable, Egypt was peaceful, Iraq was seeing a really, a big big reduction of violence. Iran was being choked by sanctions, Syria was somewhat under control - after years of Hillary Clinton, what do we have?"

"ISIS has spread across the region, Libya is in ruins - and our ambassador and his staff  were left helpless to die at the hands of savage killers. Egypt was turned over to the radical Muslim Brotherhood, forcing the military to re-take control. Iraq is in chaos, Iran is on the path to nuclear weapons, Syria is engulfed in a civil war, and refugee crisis now threatens the West," he said.

"After 15 years of wars in the Middle East, after trillions of dollars spent and thousands of lives lost, the situation is worse than it has ever been before. This is the legacy of Hillary Clinton - death, destruction, terrorism and weakness," he concluded.

Trump will hope to put the events of recent days behind him, after a party conference that was dogged by scandal and rare shows of Republican discord.

But nationwide polls put the New York mogul, who has never held elected office, almost neck and neck with Hillary Clinton, the former secretary of state heavily criticised over an email scandal.

Clinton, who will formally accept the Democratic nomination at her own convention next week, is expected to steal the limelight on Friday or Saturday by announcing her vice presidential running mate.

Team Trump tried to paint its candidate as a sheriff and his general election foe as worthy of the local slammer.

Speakers lined up to denounce Clinton for the deaths of their loved ones, for dodgy foreign policies and for putting national security at risk by using a private email server for sensitive government information.

Trump accused the former secretary of state of being a political insider with "bad instincts" and "bad judgment".

It remains unclear if that message will be enough to unite a Republican Party riven with doubts over his candidacy.

On Wednesday those doubts were laid bare when his primary rival Ted Cruz pointedly refused to endorse him.

"Vote your conscience," Cruz said, leading to a chorus of boos.

Cruz had at one point pledged to support the eventual nominee, but he was defiant Thursday, saying his pledge was "not a blanket commitment".

Before Trump took to the stage, his daughter Ivanka tried to warm up the crowd and soften her father's image.

In a slew of emails to supporters on Thursday, she spoke of a loving dad who encouraged his young daughter to succeed, of an inspirational leader and a crack negotiator destined to win.

"My father is someone you want fighting for you," she wrote. "He will outwork everyone in the room. He will always stay one step ahead of his competitors."

His roller-coaster campaign defeated 16 rivals and steamrolled stubborn party opposition after initially being written off as a joke.

He has shocked foreign leaders by questioning key pillars of American foreign policy.

On Wednesday, he qualified normally sacrosanct support for NATO allies, warning it would depend on "if they fulfil their commitments to us."

Responding to the comments, NATO chief Jens Stoltenberg told AFP there was a need for solidarity.

"I will not interfere in the US election campaign, but what I can do is say what matters for NATO," he said.

"Solidarity among allies is a key value for NATO. This is good for European security and good for US security. We defend one another." 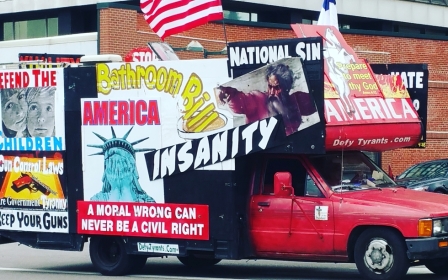