Trump seeks early withdrawal of US troops from Syria: Reports 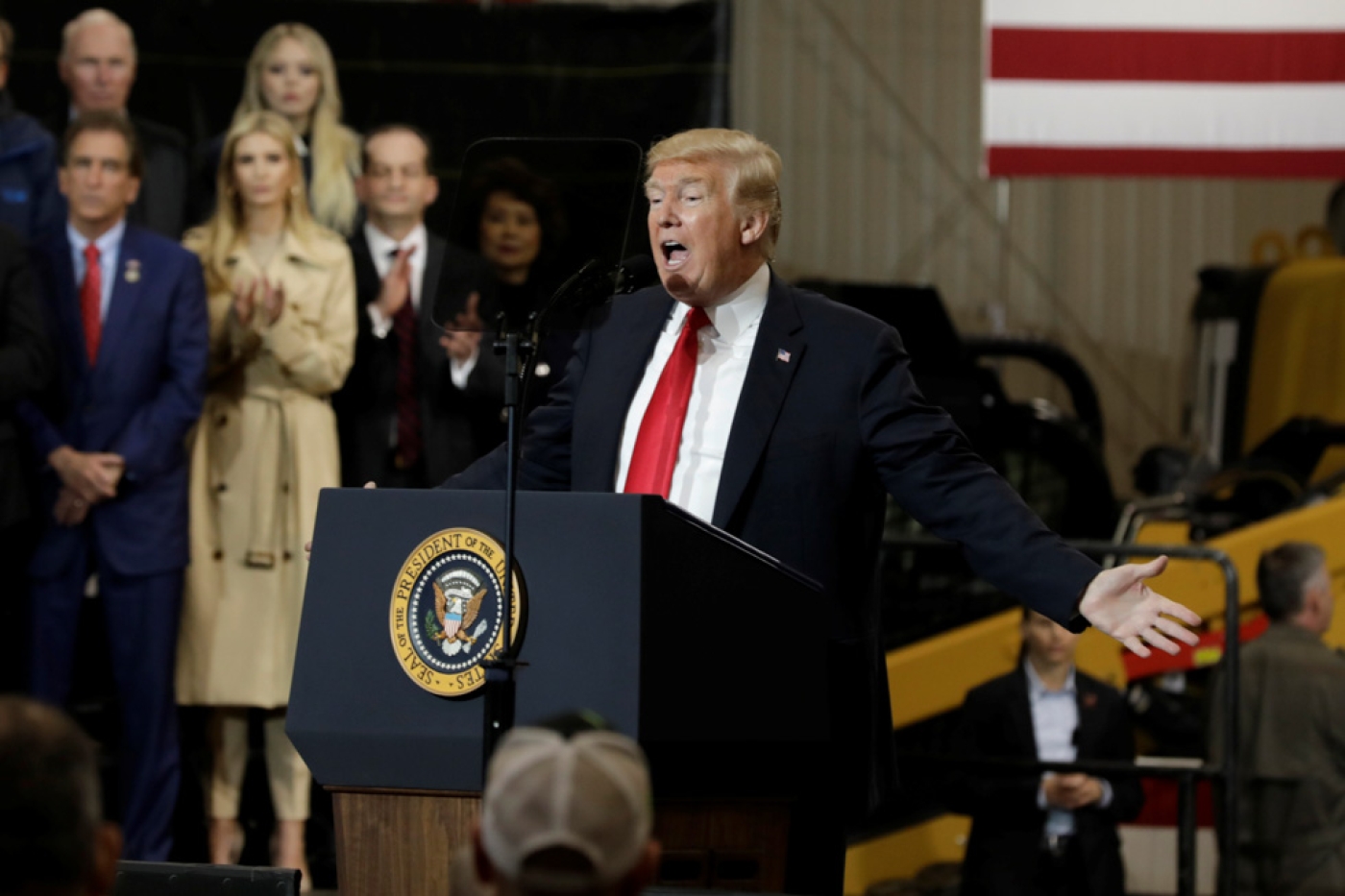 Trump speaks at Richfield, Ohio, on Thursday, where he told the crowd 'We'll be coming out of Syria, like, very soon' (Reuters)
By
MEE and agencies

President Donald Trump is pushing for an early withdrawal of US forces in Syria, two senior administration officials said on Friday, setting up a likely clash with military chiefs, who feel doing so could create a power vacuum for the Islamic State (IS) group or Iran to exploit.

A National Security Council meeting is set to take place early next week to discuss the US-led campaign against IS in Syria, US officials familiar with the plan told Reuters.

Trump also ordered the State Department to suspend $200 million of funds for recovery efforts in Syria on Friday, after reading about the additional funding in a news report.

The funding was announced by then-secretary of state Rex Tillerson in February at a meeting in Kuwait of the global coalition against IS. Tillerson was fired by Trump earlier this month. The two had often disagreed on US foreign policy.

Two administration officials who spoke on condition of anonymity told Reuters that Trump's comments on Thursday reflected internal deliberations with advisers in which he has wondered aloud why US forces should remain with the militants on their heels.

If we leave sooner rather than later, then there is a good chance that this could be all for naught and they could come back

Trump has made clear that "once ISIS and its remnants are destroyed that the United States would be looking toward having countries in the region playing a larger role in ensuring security and leaving it at that," one official said.

A second official said Trump's national security advisers have told him US forces should stay in small numbers for at least a couple of years to make sure gains against the militants are held and ensure Syria does not essentially become a permanent Iranian base.

Top national security aides discussed Syria in a White House meeting recently but have yet to settle on a strategy for US forces in Syria to recommend to Trump going forward, the official said.

The reports came a day after two soldiers in the US-led coalition fight IS in Syria were killed by an improvised explosive device in the northern city of Manbij. One of those killed was a US service member while the other was a British soldier embedded with US forces. Five other were also wounded in the bombing. The US currently has around 2,000 troops deployed in Syria.

Trump first signalled his intention to exit Syria in a speech in Richfield, Ohio, on Thursday.

"We'll be coming out of Syria, like, very soon," Trump told the crowd. "Let the other people take care of it now. Very soon, very soon, we're coming out.

"We're going to get back to our country, where we belong, where we want to be."

While the Pentagon estimates that IS has lost about 98 percent of the territory it once held in Iraq and Syria, US military officials have warned that the militants could regain the freed areas quickly unless they are stabilised.

“If we leave sooner rather than later, then there is a good chance that this could be all for naught and they could come back,” a US official told the Wall Street Journal on Friday.

"One of the major implications of terminating this process would be opening up the area to the Assad regime and to Iranian-led Shia militias, and of course this will instantly set the stage for the return of extremism and terrorism," Frederic Hof, who was the special adviser for the transition in Syria during the Obama administration, told the Journal.

A spokesperson for the White House's National Security Council said that "in line with the President's guidance, the Department of State continually re-evaluates appropriate assistance levels and how best they might be utilised, which they do on an ongoing basis". Trump
'We'll be coming out of Syria, like, very soon': Trump