Lawmakers on both sides of the aisle, as well as military leaders, have rejected rapid drawdown plans before Trump leaves office A US soldier stands guard next to Air Force One as President Donald Trump makes a surprise Thanksgiving day visit with US troops in Afghanistan, 28 November 2019 (AFP/File photo)
By
MEE staff

US military commanders are expecting outgoing US President Donald Trump to order further American troop withdrawals from Afghanistan and Iraq within the next two months. Two US officials familiar with the matter told CNN that the drawdown will likely take place before Trump leaves office on 20 January.

The Pentagon has reportedly issued a "warning order" to begin planning the withdrawal of thousands of forces, leaving both countries with 2,500 personnel each, the officials said.

It is currently estimated that there are approximately 4,500 US troops in Afghanistan and 3,000 troops in Iraq. However, the Trump administration stopped publishing such information to the public in 2017.

The Pentagon did not respond to Middle East Eye's request for comment by the time of this article's publication.

Speaking on the Senate floor on Monday, Senate Majority Leader Mitch McConnell rejected the idea of drawing down troops by the end of the year.

"A rapid withdrawal would hurt our allies and delight the people who wish us harm," McConnell, a Trump ally, said.

"President Trump deserves major credit for reducing American forces in Afghanistan to a sustainable level... that same successful approach should continue," he said, doubling down against an immediate withdrawal. Speaking to MSNBC on Sunday, Chairman of the House Intelligence Committee Adam Schiff said he thought the Trump administration was "potentially trying to put a box around" President-elect Joe Biden in places like Afghanistan and Iraq "with decisions that they can't fully implement, for example, troop withdrawal".

In the case of Afghanistan, Schiff warned that a withdrawal "may embolden the Taliban".

US presence in Iraq and Afghanistan represent the longest-running continuous military operations in American history.

In October, Trump tweeted that "the small remaining number" of US forces serving in Afghanistan would be "home by Christmas".

A core promise during his 2016 campaign was to bring troop levels in the Middle East and Afghanistan down to zero.

So far, it is estimated that US military presence in Afghanistan has decreased by around 50 percent, but those numbers cannot be verified due to the Trump administration's decision to end a decade-long policy of disclosing official troop levels. It was recently revealed that withdrawals of troops in Syria under President Trump were not what they seemed.

Shaking up the Pentagon

US military officials have consistently insisted against further US troop withdrawal from Afghanistan given that the Taliban has yet to cut ties with al-Qaeda and make peace with the Afghan government - two issues US-led peace talks have focused on.

National security adviser Robert O'Brien - the fourth official to hold the post during Trump's presidency - has advocated for the Afghan withdrawal during his year in office despite pressure from other military leaders to hold off on such moves.

Chairman of the Joint Chiefs of Staff Mark Milley has pushed back on the plan in recent months, saying the administration's timeline seemed to be irrespective of conditions.

"Robert O'Brien, or anyone else, can speculate as they see fit. I am not going to engage in speculation. I'm going to engage in the rigorous analysis of the situation based on the conditions and the plans that I'm aware of in my conversations with the President," Milley told NPR on 11 October. Last week, Trump began a sweep of the defence department, firing Defence Secretary Mark Esper and three other key officials, replacing them with people loyal to the president.

Believed to be mainly related to Esper's public comments against Trump's policies and rhetoric, a source told CNN that Esper's firing may have been related to his hesitancy to go forward with last-minute withdrawals before the required conditions on the ground were met.

On Sunday, the Washington Post reported that Esper had sent a classified memo to the White House days before his firing, recommending against deeper troop cuts in Afghanistan.

For his part, acting Defence Secretary Christopher Miller, who replaced Esper, sent a seemingly contradictory message to US forces on Friday.

"This war isn't over," Miller wrote. "We are on the verge of defeating al Qaida and it's associates, but we must avoid our past strategic error of failing to see the fight through to the finish."

"Indeed, this fight has been long, our sacrifices have been enormous, and many are weary of war -- I'm one of them -- but this is the critical phase in which we transition our efforts from a leadership to supporting role," he wrote in reference to the current US role of supporting counterterrorism campaigns.

"All wars must end. Ending wars requires compromise and partnership. We met the challenge; we gave it our all. Now, it's time to come home," Miller added.

US Politics
Biden administration vows to consult with Israel on 'all' regional issues
Arab Spring
Democracy triumphs in America. Now the US must support it in the Arab world
David Hearst
US Politics
NYC mayoral candidate blasted for comparing BDS to 'fascist boycotts' 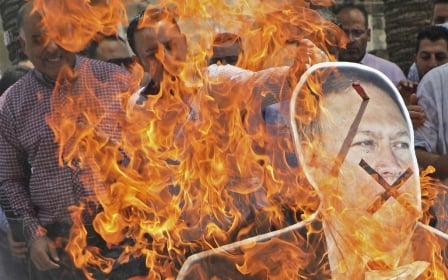