US president says attack on Yakla, which left civilians and one US soldier dead, gathered vital intelligence against al-Qaeda in Arabian Peninsula Donald Trump insisted on Tuesday that a January raid in Yemen was a success and gathered vital intelligence against the al-Qaeda affiliate there, in contrast to reports of a disastrous missions that killed civilians, left one US soldier dead and failed to capture or kill any principal targets.

In his first nationally televised speech to Congress since taking office on 20 January, Trump acknowledged in the audience the widow of US Navy commando William Owens, known as Ryan, who was killed in the operation. Tears streamed down her face as she rose and politicians gave her a standing ovation.

The White House has pushed back against criticism of the raid, the first of its kind authorised by Trump as commander in chief. Owens' father, in a newspaper interview over the weekend, called for an investigation and said he refused to meet the US president when his son's body was repatriated.

Owens was killed in the raid on al-Qaeda in the Arabian Peninsula, or AQAP, in al-Bayda province on 29 January. US officials said during the raid 14 militants were killed as well as some civilians. Medics at the scene said about 30 people, including 10 women and children, died.

Addressing a joint session of Congress, Trump said he had just spoken with Defence Secretary Mike Mattis, "who reconfirmed that, and I quote, ‘Ryan was a part of a highly successful raid that generated large amounts of vital intelligence that will lead to many more victories in the future against our enemies'."

Though Trump provided no specifics, a senior US official said earlier that the intelligence included the group's explosives manufacturing, targeting, training and recruitment practices.

The official said that such insight was particularly important given the threat that AQAP has long posed.

The group boasts one of the world's most feared bomb makers, Ibrahim Hassan al-Asiri, and AQAP has been a persistent concern of the US government since a 2009 attempt to blow up a Detroit-bound airliner on Christmas Day.

The White House had initially insisted that questioning the success of the raid did a disservice to the Navy commando who was killed.

This followed Senator John McCain's comment suggesting that the mission was not a complete success because of Owens' death as well as the loss of an aircraft used in the mission.

Trump, in an interview with Fox News that aired on Tuesday morning, resisted accepting responsibility for authorising the mission.

He said the Pentagon's planning for the operation started under his predecessor, President Barack Obama, and was something the generals "were looking at for a long time doing".

On Tuesday, Trump's acknowledgment of Owens' widow, Carryn Owens, in the audience drew the most loud applause of the night.

"Ryan died as he lived - a warrior and a hero - battling against terrorism and securing our nation," Trump said. 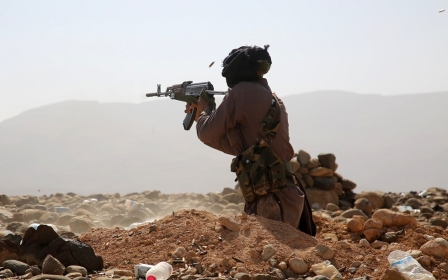