A decision by the US to withdraw its troops from northeastern Syria has led, unsurprisingly, to contrasting views on what's going on On Wednesday, US President Donald Trump announced on Twitter that the Islamic State (IS) group had been defeated in Syria.

Since his announcement, the United States has reportedly already begun withdrawing its forces from northeastern Syria.

The US has at least 2,000 troops stationed in the region. It has also waged an aerial campaign there in support of the Kurdish-led Syrian Democratic Forces (SDF) fighting against IS.

The unexpected decision from the White House has caused a stir amongst social media users regarding the reason and timing of the withdrawal.

I swear everyone was against the US troops being in Syria until Trump said he's pulling them out.

Kurdish-led forces in northern Syria 'were caught off guard by Trump’s announcement, and have requested a meeting with their US counterparts to ask for clarity on the plans.' https://t.co/lyn8JtqmvE

Some users speculated over the future implications of the decision on a number of international actors involved in the Syrian conflict. James O'Brien, who appears to be referring to Robert Mueller, the US attorney overseeing the investigation into Russian interference in the 2016 presidential elections, sees the move as good - for the US's rivals.

Trump’s withdrawal from Syria looks like one heck of an early Christmas present for Isis, Putin & Iran. Presumably, he’s done it to temporarily distract attention from Muelker. Or he’s just following orders.

First, it's clear that the Trump Administration has no particular end goal in mind on Syria, and is turning a blind eye to what will happen to the foreign ISIS fighters as they attempt to return to the countries where they are from or whether they will try to reconstitute there.

Other media personalities showed their support for Trump’s announcement:

I don't trust @realDonaldTrump on his reasons for withdrawing from Syria, but I wholeheartedly support the decision. The way the media is hyperventilating about withdrawing 2,000 troops gives you a sense of why people don't trust them. Defense industry out in force on this one.

However, Trump’s statement on winning the fight against IS has been tempered by both the Pentagon and the White House.

"These victories over ISIS in Syria do not signal the end of the global coalition or its campaign," White House spokeswoman Sarah Sanders said. "We have started returning United States troops home as we transition to the next phase of this campaign."

"The Coalition has liberated the ISIS-held territory, but the campaign against ISIS is not over," Pentagon spokeswoman Dana White said in a statement.

The Pentagon vowed to continue working with its partners in the region to defeat IS "wherever it operates".

Social media users echoed such statements in questioning Trump's assertion that IS has been defeated.

“Now we’ve won...”
I’ve not read, or heard, or spoken to a single person - diplomat, politician, academic, soldier, journalist - who thinks the fight against Islamic State is won. Being won? Yes. Won? No. https://t.co/HitYV6lrBt

Trump also seems to be confused himself. Has he "beaten the hell" out of IS, or not? It's hard to tell. 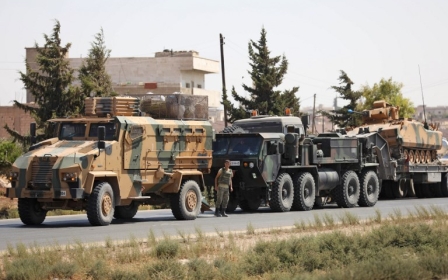