Nidaa Tounes won 85 of the 217 parliamentary seats in Sunday's vote, with Ennahda coming second with 69, the ISIE election body told a press conference.

Neither of the two top parties had been expected to win an outright majority, so political horse-trading had already begun ahead of the announcement of the results.

Ennahda, dominant in Tunisian politics since the 2011 revolution, has won praise for its grace in conceding defeat in the landmark parliamentary elections in the country, which was the cradle of the Arab Spring revolts that shook the wider region.

Just hours after polling stations closed Sunday, Ennahda acknowledged that it had been beaten into second place by Nidaa Tounes.

Ennahda, which steered the North African nation through the aftermath of the revolution, congratulated Nidaa Tounes for becoming the largest party in the first parliament to be elected since then.

The movement called on its supporters to celebrate "democracy" and hundreds of them rallied outside its Tunis headquarters despite the defeat.

"We consider Tunisia has triumphed and that Ennahda has triumphed by leading the country to this stage," said Abdelhamid Jelassi, national coordinator for the movement, whose campaign slogan was "consensus".

Independent analyst Selim Kharrat, said this has made Ennahda look like"a very sleek, very democratic party, which congratulates its opponent, which hands over power", also referring to January, when Ennahda gave way to a government of technocrats to defuse a political crisis.

That was just one more than the leftist coalition Popular Front secured.

Nidaa Tounes, an eclectic coalition of left and centre-right figures, opponents and former bigwigs of the ousted Ben Ali regime, mounted a strong campaign against Ennahda .

Ennahda, which won Tunisia’s first free elections three years ago after the toppling of Ben Ali, had previously been accused of working to Islamise society away from its traditional secularism.

Tunisia’s economy has also been in the doldrums during its tenure, and two prominent figures were assassinated last year by suspected militants, triggering the political crisis that Ennahda resolved by handing over power.

Analyst Slaheddine Jourchi said Ennahda's change of tack could be traced back to the Egyptian army's ouster of Islamist president Mohamed Morsi in July 2013 and the bloody repression that followed.

"What happened in Egypt shook them up" and led to an easing of strains with Nidaa Tounes.

Under Tunisia’s electoral system, a party that gains the largest number of votes but falls short of an outright majority is given a mandate to form a coalition government.

"The best scenario would be a Nidaa Tounes-Ennahda coalition guaranteeing a stable government for the next five years," said the French-language daily La Presse.

Foreign observers praised the "free" election and signs of a peaceful transition in the birthplace of the Arab Spring.

In other countries, the hopes of the Arab Spring uprisings have given way to conflict or renewed repression.

However, poverty and unemployment, which were key factors that sparked the anti-Ben Ali revolt, remain unresolved.

Nidaa Tounes leader Beji Caid Essebsi, an 87-year-old veteran of Tunisian politics, vowed to form a coalition with other parties to take the country forward.

"We took the decision in advance that Nidaa Tounes would not govern alone, even if we won an absolute majority," Essebsi told Al-Hiwar Al-Tounsi television.

"We will govern with those closest to us, with the democratic family, so to speak," he said.

Essebsi has also said he will stand in the 23 November presidential election, and is considered to be a front-runner.

While election results were coming in, Tunisian authorities on Wednesday said that they had arrested 30 "terrorists" linked with the recent operation in Oued Ellil, a town of the western province of Manouba.
The 30 were planning to carry out operations against vital institutions and sabotage Tunisia's parliamentary election, which was held on Sunday, the Tunisian Interior Ministry said in a statement.
It said the 30 people had three Kalashnikov rifles, a large number of ammunitions as well as communication devices in their possession at the time of their arrest.
"Investigations have showed that these people were planning to target vital institutions and sabotage the electoral process in the country," the ministry said in the statement.
The Interior Ministry added that its personnel also arrested seven people who formed two cells in the southern provinces of Tataouine and Sfax for recruiting youths for the sake of organizations in both Syria and Iraq.
On Friday, Tunisian policemen raided a home in Oued Ellil, where a group of terrorists were hiding. The attack left six terrorists dead along with a policeman.
Tunisia has been the target of terrorist attacks since 2011, but the pace of these attacks has accelerated since 2013. 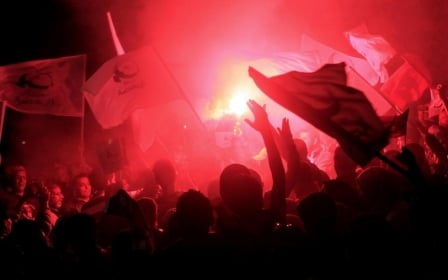