Mohsen Marzouk, the outgoing secretary general of Nidaa Tounes, has now announced a 'total separation' from his party Tunisia on Tuesday extended its state of emergency for another two months, the presidency said.

President Beji Caid Essebsi has "decided on an extension of the state of emergency over all the territory" of the country until 21 February, 2016, a statement issued by his office said.

The measure was last imposed on 24 November following a suicide attack in the capital that killed 12 presidential guards. It had been due to expire on Wednesday. A state of emergency was also imposed in June after gunmen killed 38 foreign tourists in the attack on a beach in Sousse but then lifted in early October.

The extension comes at a time of political division in the country.

On Monday, Mohsen Marzouk, the outgoing secretary general of Nidaa Tounes, which holds the majority in parliament, said that he had now carried out a "total separation" from his former party.

Over the weekend, during a meeting with junior Nidaa Tounes members, he said that he believed Nidaa Tounes had died a "clinical death".

Thirty-one MPs loyal to Marzouk resigned from the party's parliamentary group in November, with the party now marred in turmoil over how to deal with the split and a political congress due to take place early next year.

Nidaa Tounes was up by Essebsi as an alternative to the Islamist Enahda party which had dominated politics since the overthrow of former strongman Zine El Abidine Ben Ali in January 2011. The party went on to win both the presidential and the parliamentary elections in 2014 but has since fragmented, largely due to a lack of a sense of common purpose and direction.

Former Tunisian President Moncef Marzouki, an independent seen as sympathetic to Enahda, on Monday also further complicated Tunisia's political landscape by announcing the formation of a new political party called al-Irada, or “the Will”.

“It is my duty as an activist to return to the sphere of politics,” Marzouki said.

“If the ruling party is divided, our task is to restore the importance of the political process,” he added while saying that the country was in a “catastrophic” state and that the current government was “totally helpless”.

Marzouki lost to 88-year-old Essebsi, a former prime minister under Ben Ali, in 2014 but appears to be have planned a return to politics due to the internal fracturing of Nidaa Tounes and ongoing security threats throughout the country.

“We had to wait for a significant amount of time to pass [following the presidential elections] to give the government and the ruling party the necessary space to be effective,” a Tarek Kahlaoui, a member of the new Irada party told Tunisia website Tunisia Live.

“Yet, one year after the elections, the government is a failure and the ruling party is undergoing internal factionalism. So the time has come to introduce our party and to provide the Tunisians with an alternative.” 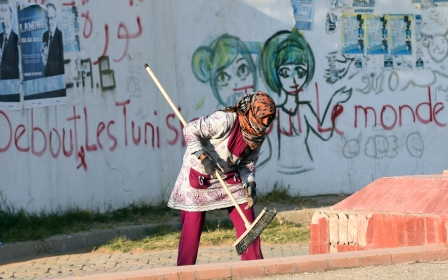 Tunisia Politics
Was it all for nothing? The Tunisian crucible of the Arab Spring