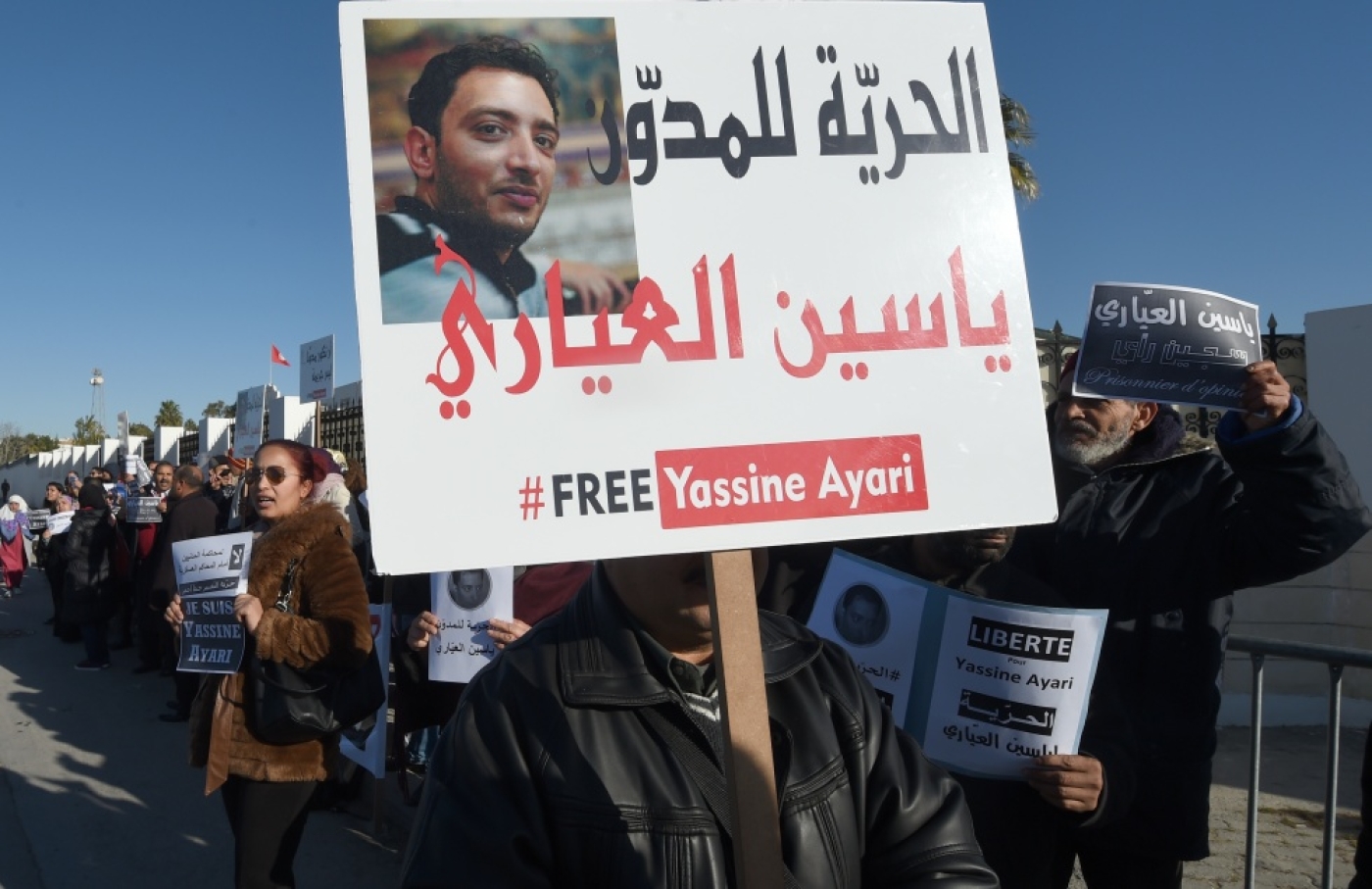 Tunisian protestors shout slogans in front of the military tribunal in Tunis on 20 January, 2015 during a trial of Tunisian blogger and journalist Yassine Ayari, who was sentenced to one year in jail (AFP)
By
MEE and agencies

A Tunisian military court sentenced blogger Yassine Ayari to a year in prison Tuesday for defaming the military in a number of Facebook posts, in a case that has been criticised by human rights groups.

The 33-year-old was arrested on 25 December on his return from Paris, following an initial three-year sentence handed down the previous month in his absence.

Ayari told the court before the new ruling that the charges were a "settling of scores against me for criticising officers in the army."

He had accused officers and defence ministry officials of financial abuse in posts on his Facebook page that date from August and September.

Dozens of protesters gathered outside the court demanding Ayari's immediate release, saying the conviction was a violation of freedom of expression.

The demonstrators chanted "Down with military trials" and "No return to dictatorship."

The defence team said it planned to appeal.

"Freedom of expression is the only benefit of the revolution and today we see a blogger sentenced harshly by a military court for criticising the army," said lawyer Malek Ben Amor.

Ayari was also an activist during the regime of dictator Zine El Abidine Ben Ali, who was ousted in a 2011 uprising that triggered the Arab Spring revolts.

Ayari's father, an army colonel, was killed in a clash with militants in May 2011 at Rouhia in the northwest.

In recent months he has been highly critical of Nidaa Tounes, which won October's landmark general election, and of the party's leader Beji Caid Essebsi who became president in December. Essebsi is a veteran politician who served under previous Tunisian regimes.

Human rights organisations had urged the Tunisian authorities not to try Ayari in a military court, calling for the blogger's release.

New York-based Human Rights Watch has described the case against him as "not worthy of the new Tunisia".

It has urged parliament to reform laws that lead to imprisonment for defaming or insulting state institutions, and to remove the jurisdiction of military courts over civilians.

And Amnesty International had called for Ayari's immediate release from prison, saying that the continuation of his detention is a "gross violation of the right to freedom of expression."

"RSF expresses its deep concern after blogger Yassine Ayari was sentenced in absentia,", it said in a statement, calling for his case to be transferred to a civilian court that would "guarantee impartiality and independence".

"The conviction of a civilian blogger by a military court is unacceptable for a country like Tunisia, undermining its process of consolidating democracy," she said.

"(The charge of) attacking the honour of the army, the main accusation against Yassine Ayari in the military court, represents a dangerous and draconian legal instrument" against freedom of expression, one of the main achievements of the 2011 revolution, Morillon added.