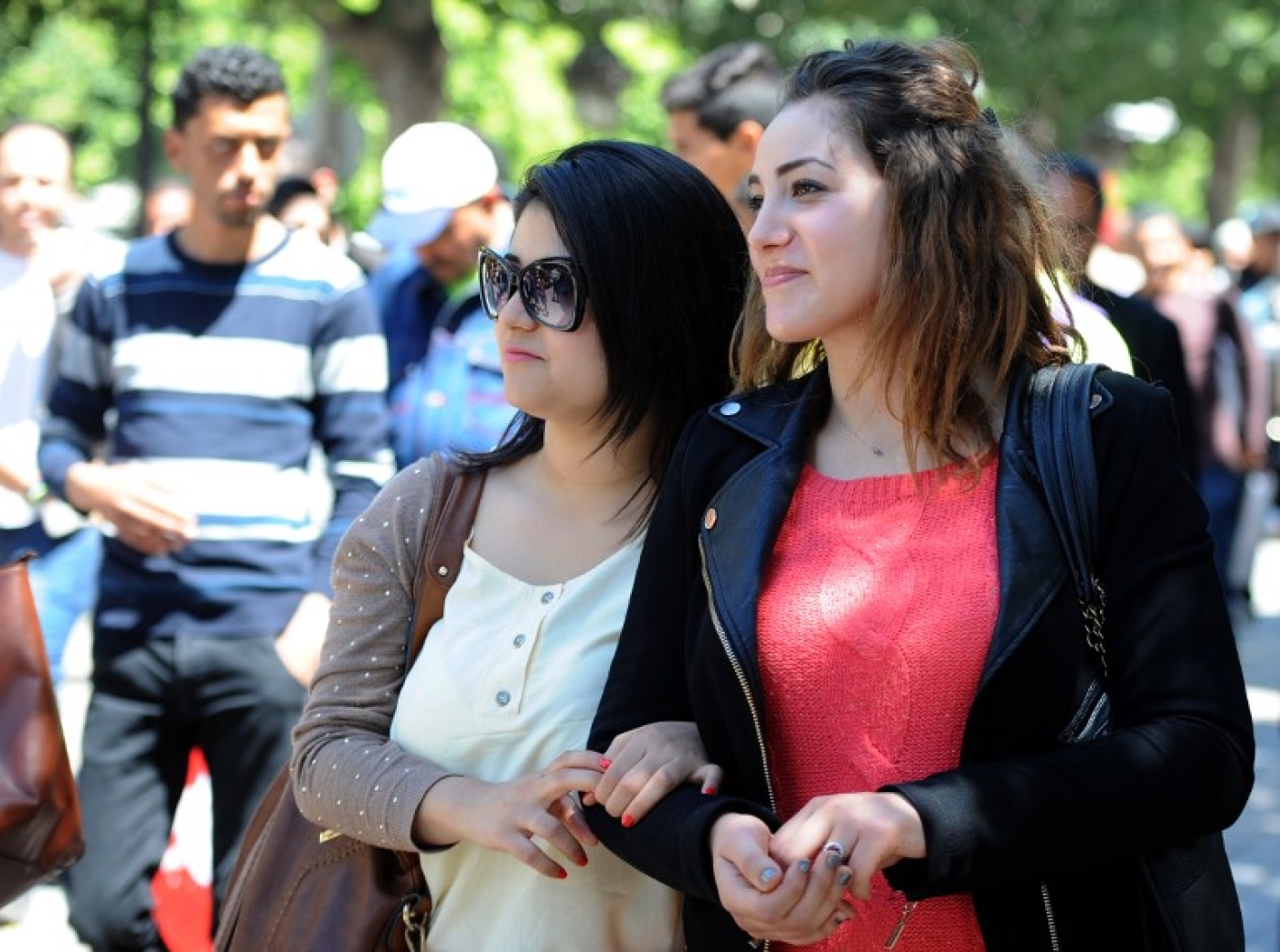 Tunisian women account for 41 percent of judges, and 50 percent of engineers (AFP)
By
Jonathan Fenton-Harvey

At a speech for national women’s day on Sunday, the president pledged to take legislative steps to remove the laws, which comes on the tail of a recent law prohibiting sexual, political and psychological violence against women.

Tunisia’s constitution has since independence 1956 stipulated that women can only inherit half of what men receive.

Essebsi, leader of the Nidaa Tounes party – which is in coalition with the political Islamic party Ennahda - used religious justifications for his position.

“Inheritance is a matter for mankind that God left to the diligence of the people according to their era”, he said in his speech on Sunday.

“The state is obliged to achieve full equality between women and men and to ensure equal opportunities for all responsibilities, as stipulated in Article 46 of the national constitution,” he added.

On the same day, Essebsi also called on the prime minister and minister of justice to reform the law that prevents Muslim women from marrying non-Muslim men.

Such marriages had been prohibited by a decree in 1973, and are not recognised by the country’s grand mufti.

However, a number of Islamic scholars in Tunisia have already expressed their support for Essebsi’s proposal, and on Tuesday vowed to support the interfaith marriage law.

There have been growing calls for such interfaith marriages to be allowed. In March, around 60 rights groups signed a statement demanding freedom for “a fundamental human right: which is the right to choose a spouse".

At the time, Sana Ben Achour, president of the Beity Association, a women’s rights group, said that "it is inadmissible today for a simple decree, which has almost no judicial value... to command the lives of thousands".

Essebsi’s suggestions have been welcomed by many.

"The president's comments on reconsidering the rules that prevent Muslim women marrying non-Muslim men, and to equalise inheritance rules, are most welcome,” Rothna Begum, women's rights researcher on the Middle East and North Africa at Human Rights Watch, told MEE.

“Tunisia is the most progressive in the region on a number of women's rights issues and finally doing away with these discriminatory rules will help both Tunisian women and act as a model for the region," Begum added.

Tunisia is often considered a model example of women’s rights in the Arab world. Women make up 41 percent of Tunisian judges, around 60 percent of medical sector workers and 50 percent of engineers.

If the laws do eventually pass, Tunisia will become the first Arab country to legalise both equality of inheritance and interfaith marriages between Muslim women and non-Muslim men.

Essesbi will need wide support from fellow parliamentarians to pass the legislative reforms.

Such events follow a historic bill passed by the president in July, initially submitted by Tunisia’s Ministry of Women’s Affairs, which outlawed sexual, political and psychological violence against women.

It passed with a majority of 146 to 71 in favour, with zero abstentions.

The law itself defines violence as “physical, mental, sexual and economic aggression against women based on discrimination between the two sexes”.

Further funding will be put into healthcare, to detect and respond to violence against women.

Sexual harassment in public spaces has been criminalised, along with harsher penalties against paying women less for the same work as men.

In addition, a controversial ‘marry your rapist’ law was abolished on the same day in July, which Morocco and Jordan have recently scrapped, and which Lebanon abolished on Wednesday.

These reforms come after decades of lobbying from human rights groups.

Yet HRW Tunisia director Amna Guellali says that “the government should now fund and support institutions to translate this law into genuine protection.”

And some Tunisian women are sceptical of real change, and claim that much opposition remains to such social reform.

Balkis, an English literature student from Carthage - reports that she feels “sexism is still institutionalised” in Tunisia, which will cause difficulties in passing the laws.

But, she added, “I appreciate Essebsi’s courage with this move, as it is something that must be done for [our] democracy to succeed.”

“I know [these two laws] will not pass due to the wide opposition that it will face from Tunisian society and other politicians,” she told MEE.

And the anti-violence law that has already passed, she said, will have little tangible effect on womens’ lives.

“This other law will make no difference”, since she feels the problem is so widespread.

Nearly 70 percent of Tunisian women have been victims of abuse, according to the Tunisian Association of Democratic Women.

She argues that Essebsi’s most recent proposals could pass in the future “if other parties including Ennahda realise that there isn’t an issue [or contradiction] with Islamic law on [equality of inheritance]”, adding that the prohibition of Muslim women marrying non-Muslim men “is just an interpretation, rather than actual prohibition in Islamic law”.

With regards to the inheritance restrictions, she again stated that it’s possible, but it “will require getting all political parties on board. The law on violence against women took a few years, so it might be a while yet. Hopefully the momentum will help to keep the reforms rolling.”

A committee will now be formed to study Essebsi's proposals, and then they will be voted on in parliament.