Turkey accuses IS of carrying out Istanbul airport suicide attacks 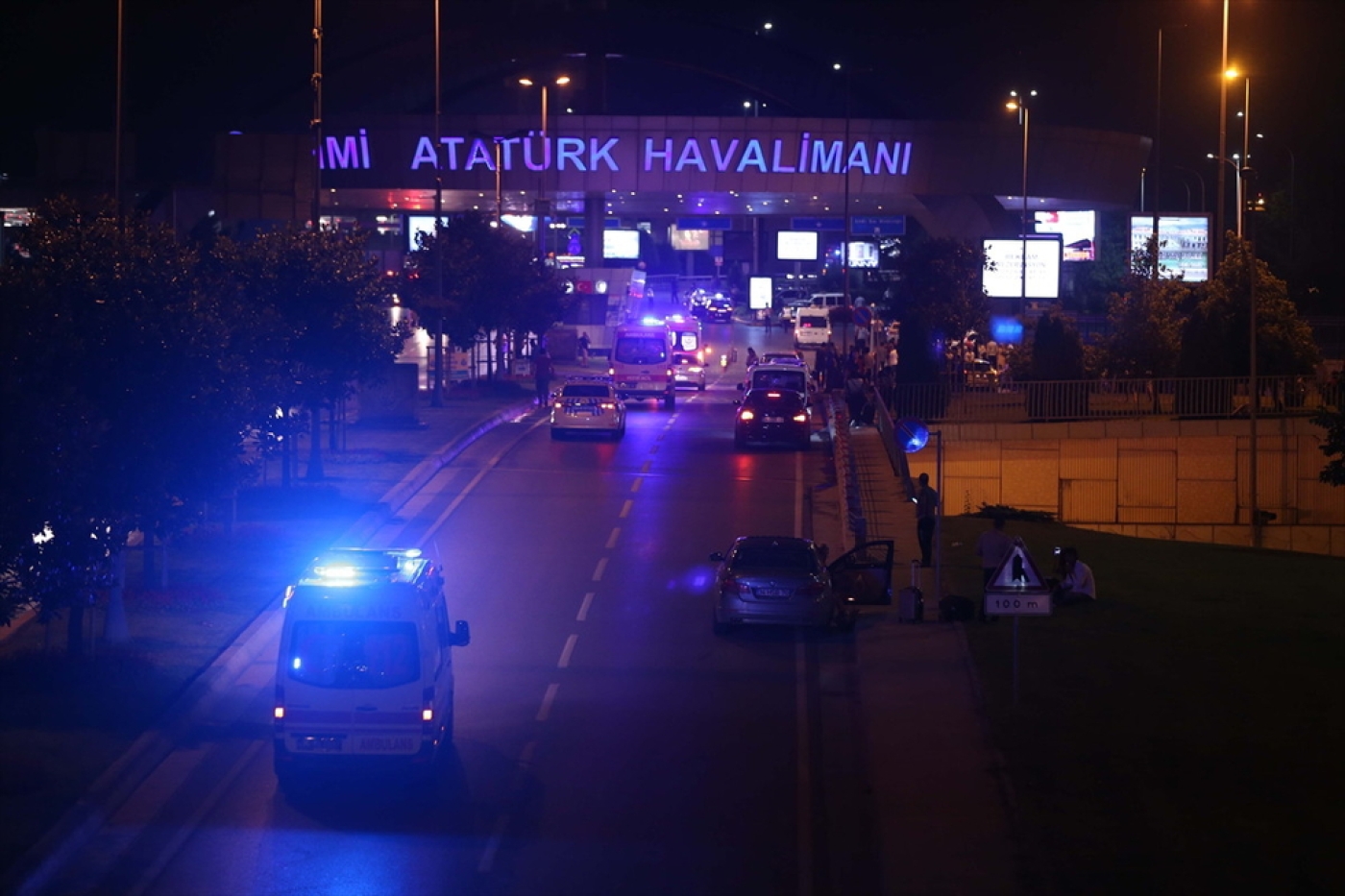 Entrance of the Ataturk International Airport after an explosion, in Istanbul, Turkey on 28 June 2016 (AA)
By
Suraj Sharma
, Jacob Powell

ISTANBUL, Turkey - Dozens of people were killed and hundreds more injured on Tuesday evening in a suicide attack at the international arrivals terminal of Istanbul's Ataturk airport.

"The death toll from the attack this evening is 36 at the moment. There are many injuries too. It is crystal clear once again that terror is a global curse. Our country has been in a relentless fight against separatist terror and at a time when it has achieved considerable success. An attack at such a time is laden with meaning," he said.

"Our country has the strength and determination to overcome such cowardly attacks. I call on everyone to come together in solidarity. It will be the best response to such an attack," he added.

The prime minister also said that initial investigations into the attack point to the Islamic State (IS) group as responsible. 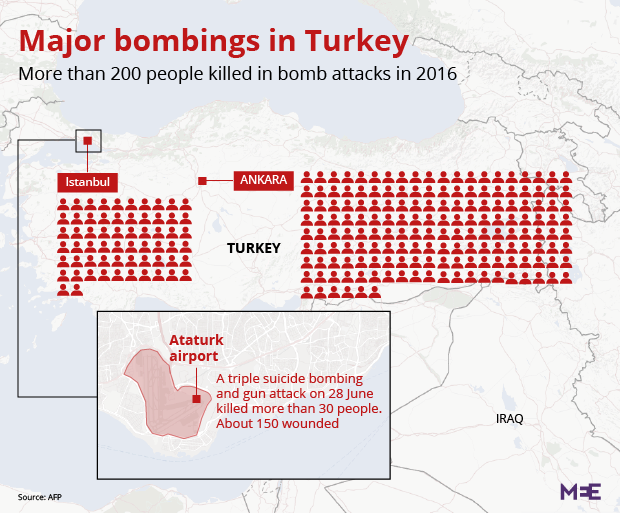 "The findings of our security forces point at the Daesh organisation as the perpetrators of this terror attack," he said, using the Arabic acronym for IS.

A Turkish official has confirmed reports that three suicide bombers were involved. The official said two of the bombers were at the international arrivals terminal and the third in the parking lot. All three detonated suicide vests.

In a statement, the Turkish president said: "I strongly condemn this attack. This attack during the celebrated month of Ramadan shows that terror has no values, including [religious] beliefs."

"I hope this attack on Ataturk airport becomes a turning point and a new dawn in a joint fight, particularly on the part of western countries, against terrorist organisations across the world," he added.

Turkish opposition leaders also condemned the attack, while questioning whether there had been intelligence or security failures in the run-up to the bombings.

“We should think about how such a thing could happen in the most secure airport of the country, how terrorism reached the heart of cities. There are serious lesson to be learned here.”

Local Turkish TV quoted an official who said that the majority of the dead and wounded are Turkish citizens but some of the victims are foreign nationals.

More than a dozen ambulances raced to the international terminal of Ataturk airport, CNN-Turk said.

"It was very strong - everyone panicked and started running in all directions," one witness told CNN-Turk.

CCTV footage showed one of the attackers being shot by airport security, before detonating an explosive-laden suicide vest while lying on the ground.

Other footage showed one of the bombers detonating their explosives while people attempted to flee the scene.

In a CNN-Turk report, taxi driver Cemal Yalcin said: "I was waiting in the line to pick up customers. Then I heard an explosion, gunshots and then another explosion. Many of my colleagues in line before me were injured and have been taken to hospital."

Police set up a perimeter around the site, television images showed.

Turkey has imposed a media ban on domestic news outlets to prevent graphic images from being broadcast.

TRT World, a Turkish news outlet, reported that all entry and exit points at the airport were closed off after the attack.

All flights at Istanbul's Ataturk international airport have been suspended, according to local Turkish news outlets, although flights have began to land at the airport again on Wednesday morning.

Turkey has been hit by a string of deadly attacks in the past year, blamed on both Kurdish rebels and the IS group.

A bomb ripped through a central Istanbul district on 7 June, killing 11 people, including seven police officers and four civilians.

Two separate blasts in Ankara claimed by the Kurdistan Freedom Falcons (TAK) - an alleged splinter group of the PKK - earlier this year claimed dozens of lives.

Last month, at least eight people including soldiers were wounded by a remotely detonated car bomb aimed at a military vehicle in Istanbul that was claimed by the PKK.

Meanwhile, a dozen German tourists were killed on 12 January in a bombing in the heart of Istanbul's tourist district blamed on IS militants.

At least three Israelis and an Iranian were killed in a 19 March bombing on Istanbul's main Istiklal shopping street, an attack also blamed on IS. 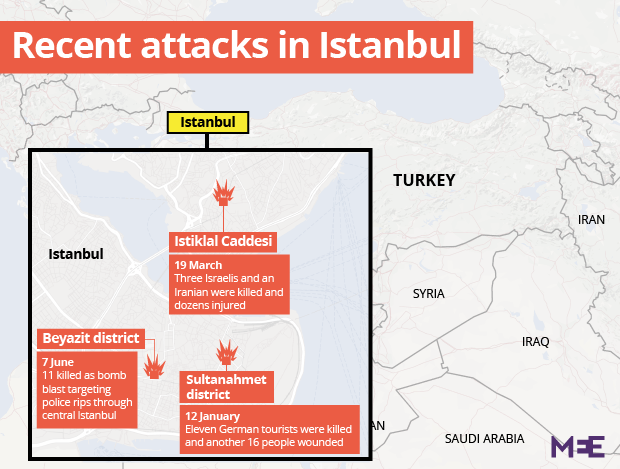 Attacks in Turkey have had a dire effect on the tourism industry and further violence in Istanbul comes at the worst possible time heading into the key summer season.

Some 1.75 million foreigners came to Turkey in April, down more than 28 percent in April 2015, the tourism ministry said in its latest release.

The fall was the steepest monthly decrease for 17 years and raised fresh concerns about the health of the industry heading into the summer. The US embassy in Turkey in April warned of "credible threats" to tourist areas in Istanbul and the resort city of Antalya, in particular to public squares and docks.

Turkey, a member of NATO and the US-led anti-IS coalition, appears to have stepped up its operations against IS in northern Syria, where the militants control areas near the border. Some analysts say this has made Turkey more vulnerable to attacks.