The police raids, which the state-run Anadolu news agency said were focused on the western province of Izmir, brought the number of such detentions to around 70 since "Operation Olive Branch" was launched on Saturday.

The incursion into the Afrin region targets the US-backed Syrian Kurdish YPG, viewed by Ankara as a terrorist group and an extension of the PKK, which has fought an insurgency in Turkey's largely Kurdish southeast since 1984.

Counter-terrorism squads launched simultaneous raids in various parts of Izmir and the nearby provinces of Denizli and Manisa, Anadolu said.

Among those in custody was the Izmir head of the pro-Kurdish Peoples' Democratic Party (HDP), the second biggest opposition party in parliament and also accused by Ankara of being an extension of the PKK. It denies the accusation.

HDP spokesman Ayhan Bilgen named four journalists among those arrested in the investigation into social media postings. He said the probe was targeting "those who side with peace".

"Journalists are having their doors rammed down without anyone knocking and they are being detained as if there were an army or ammunition inside," he told a news conference.

Among those arrested were also six suspects accused of spreading propaganda on the streets, which amounted to "harassing people", the agency said, adding that they were planning to hold a protest in a park.

Police carried out similar arrests related to social media posts across the country, detaining 14 suspects in the eastern provinces of Van, Igdir and Mus, and another five in the Mediterranean province of Mersin.

Protests over Afrin spilled over into Germany, when an anti-invasion protest at Hannover airport descended into a brawl between Kurdish and Turkish immigrants.

Protests by Kurds were also reported outside the Russian embassy in Beirut. Russia withdrew its military observers in Afrin over the weekend in an apparent deal to allow Turkey to being its invasion.

Ankara has enforced a crackdown since a failed coup in 2016 that critics say has unjustly targeted pro-Kurdish politicians. HDP politicians are in jail on terrorism charges, which they deny.

More than 50,000 people have been jailed and face trial since the attempted putsch and 150,000 have been sacked or suspended from their jobs.

The government says the moves were necessary given the security threats Turkey faces.

On Monday, authorities in Ankara banned all rallies, protests, meetings and concerts across the capital, for as long as the Afrin operation continues.

The Turkish government on Sunday presented Turkish media executives and editors with a 15-point list of demands on reporting the invasion, including to steer clear of reporting protests against the invasion.

Turkey's foreign minister, Mevlut Cavusoglu said on Tuesday that Ankara take whatever steps it needs for its security.

He suggested Turkey could widen its assault on Afrin to Manbij, a town to the east of held by the US-aligned SDF, to "battle the terrorist organisation".

"Terrorists in Manbij are constantly firing provocation shots. If the United States doesn't stop this, we will stop it," he said.

"Our goal is not to clash with Russians, the Syrian regime or the United States, it is to battle the terrorist organisation.

"I must take whatever step I have to. If not, our future as a country is in jeopardy tomorrow. We are not afraid of anyone on this, we are determined... We will not live with fear and threats," Cavusoglu said. 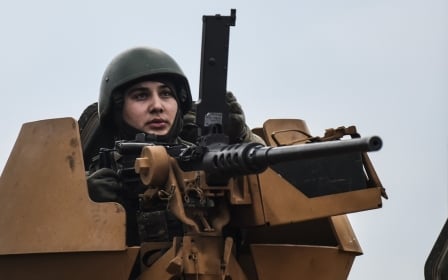