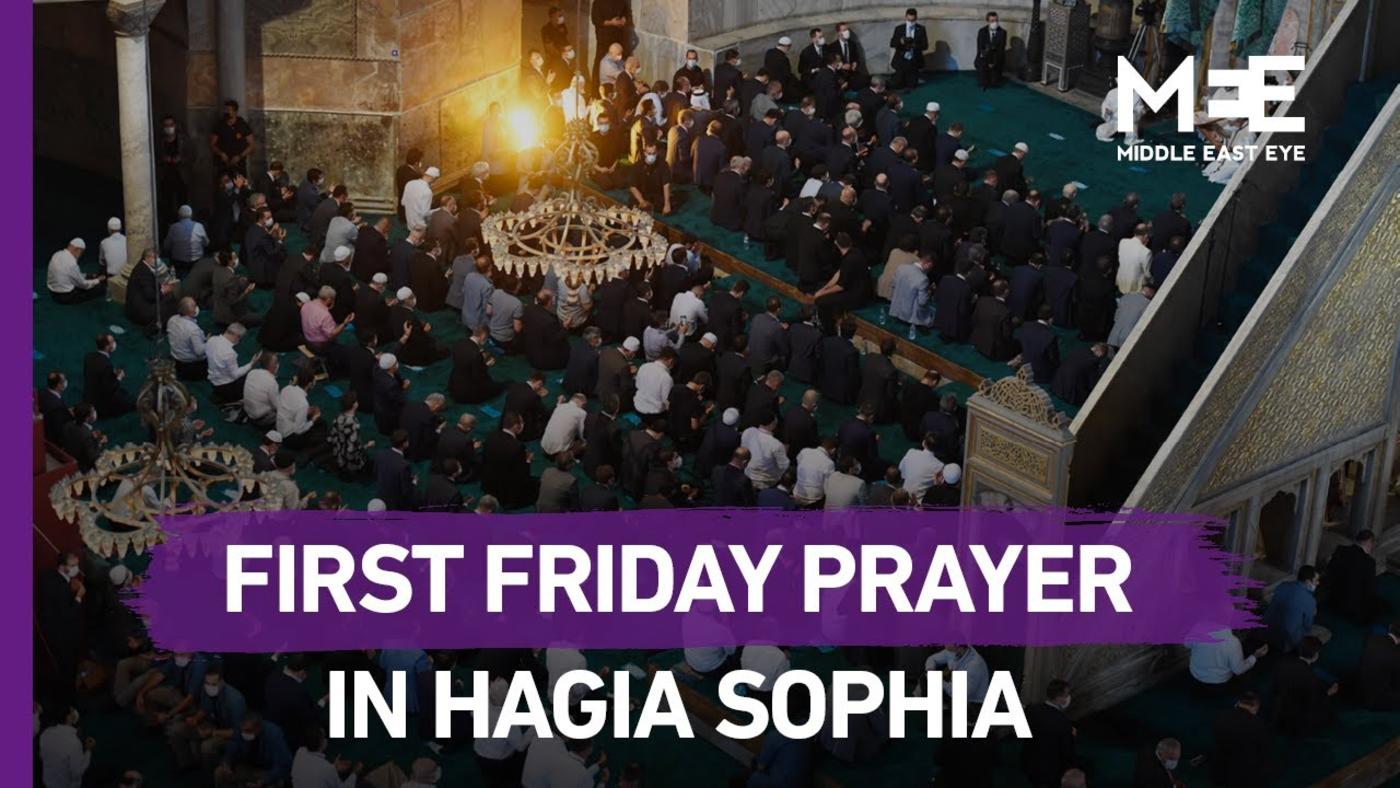 Around 10am, the crowd in Uskudar, a historic and conservative neighbourhood on Istanbul’s Asian side, was already thronging.

Among the people carrying Turkish flags and Islamic banners and chanting slogans was a man in his 50s, looking around with bewildered eyes.

He had come from France, where he has been living since he was 15.

"As a Turk, it was impossible for me to miss this historic moment. So I came all the way by driving," he told Middle East Eye. The man, who concealed his name due to the allegations that the French government has refused to grant citizenship to some Turks over their pro-Turkey social media posts, was not an exception.

The ferry from Uskudar to Eminonu was more crowded than ever, and those disembarking joined a greater mass moving towards Hagia Sophia, the iconic and historic building that was now controversially being reconverted back into a mosque.

Among the masses were thousands of people who had come from Anatolia’s remote areas, as well as from European countries such as Germany, France and Austria that have a considerable Turkish population.

All the streets ending up at Hagia Sophia were full of prayers. Before the Friday sermon started, the prayers, chanted from Hagia Sophia’s minarets, were mixed with slogans.

People were so excited that the police failed to keep them away after the designated prayer areas were full.

Due to the coronavirus pandemic, spots to pray in were marked out from each other at a safe distance – though the lines between them soon started to disappear. Being among the first to pray at the Hagia Sophia in eight decades clearly ourtweighed the risks of contracting Covid-19 for many.

Even so, due to the pandemic and security concerns the interior of the Hagia Sophia was allocated to statesmen and politicians alone, including the representatives of the opposition parties.

Outside, a man with his two sons was almost crying.

"This is the day that I had been waiting for decades. Now, Turkey is a free country," he said.

Among conservative Turks, the conversion of Hagia Sophia into a museum in 1934 by Mustafa Kamal Ataturk is considered a submission to foreign pressure and a result of the defeat in the First World War, rather than the celebration of secularism its proponents say it was. This idea reflected itself during the Friday sermon.

"Oh my Lord, praise be upon you. This is like Hajj," a man shouted. Another agreed with him and said: "I had never seen such a crowd except in Arafat," in reference to a mountain outside Mecca.

The idea of resurrection or, in other words, the reconquest of Istanbul, was evident during the sermon as well.

It was Mehmed II, conqueror of Constantinople, who in 1453 converted the Hagia Sophia from a Christian cathedral to a mosque. And the theme of reconquest loomed large.

Several historical objects symbolising the conquest were used during the service. The imam, Ali Erbas, head of the Religious Directorate, gave the sermon holding a sword.

On it was written the Quranic verse "Indeed, we have given you, a clear conquest." It was a line he repeated.

Hundreds of Muslim foreigners, including Somalis, Pakistanis and Syrians, joined the Turks outside in celebration. A group of Somali students waved their country's flag and chanted slogans.

"We are so happy that Hagia Sophia is a mosque again. This is a remarkable day because Turkey shows what independence is," one of them said.

In Greece, whose people and church lost the Hagia Sophia six centuries ago, churches meanwhile rang their bells in protest at the conversion.

Videos of the Greek dismay were circulated gleefully among the crowd in Istanbul.

The litany of foreign powers warning against reconverting the building had only reinforced perceptions in Turkey that the Hagia Sophia’s status as a mosque was linked to the country's independence.

Fatih, a retired teacher, said: "If you want to understand whether the re-conversion decision was right, look at what the West is saying. They love interfering in our domestic issues. But they forget that Turkey is now free. Look, we even opened Hagia Sophia!"

In the minds of conservatives and Islamists in Turkey, Hagia Sophia has always been at the heart of polemics with secularists on the grounds that the decision to convert the "symbol of the conquest" into a museum was unacceptable and harmed Turkey’s position in the eyes of the Muslim world.

This time, the conversion into a mosque by Turkish President Recep Tayyip Erdogan did not spark such a cultural or historical debate domestically. Instead, the main opposition CHP party remained quiet while others pledged their support.

'I was against the decision at the beginning. Yet, after seeing this crowd, I understood that there was a desire within the society'

A few dissident voices such as the famous Nobel laurate Orhan Pamuk criticized the government, accusing it of destroying Turkey's secular identity and running against the wishes of Ataturk – the Turkish Republic’s founder.

Before the conversion decision was taken, some shop owners around Hagia Sophia were concerned that it would lead to more tensions with the West and therefore a decline in the number of tourists or more economic problems.

While some of them may still be worried, a hotel manager, Ahmad, told MEE: "Frankly speaking, I was against the decision at the beginning. Yet, after seeing this crowd, I understood that there was a desire within the society."

He believes that the Hagia Sophia has now been made more visible in the world than ever, which will attract the attention of more people.

On Friday, at least, the interest around Istanbul was at a high.

After the sermon ended, hundreds of people loitered around the ancient building, queuing to enter without paying the fee once charged by the museum. 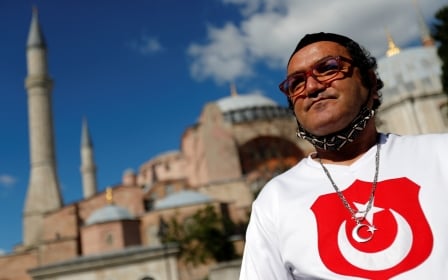