Former Galatasaray striker Hakan Sukur celebrating his goal during the Europe Championship preliminary soccer game against CSKA Sofia in Olympic stadium, in Istanbul in April 2003 (AFP).
By
MEE and agencies

Turkey has issued an arrest warrant for former international football striker Hakan Sukur, seized his assets and arrested his father as part of a widening sweep against alleged supporters of the failed 15 July coup.

Sukur, the most famous player in Turkish footballing history, was accused by prosecutors of “being a member of an armed terror group” on Friday, a reference to the organisation of the US-based preacher Fethullah Gulen whom Ankara claims was behind the coup, according to the state-run Anadolu news agency.

Sukur and his family are understood to have left Turkey for the United States last year, and on Friday Turkish media reported that the a regional prosecutor's office had issued an order to seize his assets, while his father Selmet Sukur was detained during Friday prayers.

The former footballer was accused of insulting President Recep Tayyip Erdogan on Twitter in February, risking a four-year jail sentence. At the time, he said that he did not intend to target the president.

Sukur, whose football career stretched from 1987 to 2007, was by far the most prolific goal scorer in the history of the Turkish national side, with 51 goals in 112 appearances. He is also remembered for his performance in the 2002 World Cup, where Turkey registered its best ever performance of third place. Sukur counts Galatasaray, Internazionale and Blackburn Rovers among his former clubs.

After football, Sukur went into politics and was in 2011 elected MP for Erdogan’s ruling Justice and Development party (AKP). But he resigned in 2013 after a corruption probe that targeted Erdogan and his inner circle, siding with the movement of his arch-foe Gulen.

Police forces inspected a house in Istanbul, believed to belong to Sukur. His father’s home in Sakarya was also inspected.

The arrest warrant for Sukur was issued on the same day that a video emerged of Gulen leading a sermon for players from Galatasaray in 1996, illustrating close ties between the cleric and football in Turkey. In April Galatasaray cancelled a sponsorship deal with a construction firm, after executives at Dumankaya Construction were detained as part of an earlier police crackdown on the Gulen movement.

Turkish authorities are adamant that Gulen and his followers are part of an illegal organisation that has been seeking to topple the government and that the 15 July coup attempt was simply the latest move in that regard.

A state of emergency, declared on 20 July, expanded government powers to issue arrest warrants and hold people in custody for up to 30 days without charge.

Turkey’s Western allies have expressed concern over the scale and speed of the post-coup crackdown, insisting that the Turkish government takes steps to ensure that legal process is observed.

Turkey has responded harshly, and even accused its Western allies of siding with coup plotters by making such statements.

The arrest warrant for Sukur is the latest high-profile element of the clampdown and comes a day after Turkish authorities ordered the arrest of 648 judges and prosecutors as the country's post-coup crackdown continued.

The arrest warrants were issued by the Ankara chief prosecutor’s office on Thursday, hours after they were suspended by Turkey’s Supreme Board of Judges and Prosecutors, or HSYK.

The total number of judges and prosecutors suspended from their jobs now stands at 2,851. More than 1,500 came in the first few days after the coup attempt. Eighty eight university staff members were also suspended from Istanbul's Marmara University, while another 43 academics from the university reported to the Higher Education Board after they were all accused of being linked to the Gulen movement.

These warrants came on the same day that the Istanbul municipality on Thursday revoked a permit granted to a Turkish pop singer to hold two concerts in September, ostensibly for disrespecting the people’s will to express their opposition to the Fethullah organisation.

Sila Gencoglu had said on Twitter before the 7 August mass “democracy and martyrs” rally in Istanbul that “although she was totally opposed to coups she would not take part in such a ‘show’”, the Turkish newspaper Hurriyet reported.

She later said on Twitter that she stands by her statement and said “if we are speaking about democracy then I have simply expressed my opinion too,” Hurriyet reported.

The singer’s permits for scheduled concerts in Bursa, Kayseri and Ankara were also revoked. 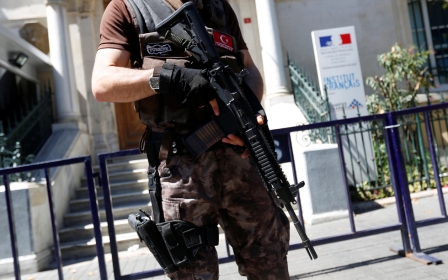 Turkey Coup
Turkey warns US not to 'sacrifice relations' over Gulen