Turkish authorities have identified a suspect over the suicide bombing close to Turkey's border with Syria in which 32 people were killed, Prime Minister Ahmet Davutoglu said on Tuesday.

"One suspect has been identified. All the (suspect's) links internationally and domestically are being investigated," he said in televised comments.

He added there was a "high probability" the attack was caused by a suicide bomber with connections to the Islamic State group (IS).

"We expect this investigation to be concluded as soon as possible," Davutoglu added.

Davutoglu said that the death toll had now risen to 32 with 29 victims still hospitalised. More than a hundred were reportedly injured in the blast.

"What's necessary will be done against whomever responsible for (the attack)," said Davutoglu. "Nobody should ever doubt this."

"This is an attack that targeted Turkey," he added.

The attack appears to have been aimed at activists from the Federation of Socialist Youth Organisation (SGDF) who had gathered to announce a pending visits to the war-torn Syrian Kurdish majority town of Kobane where they were expecting to do volunteer and reconstruction work. Kobane has become a symbol of resistance against IS militants, who were driven out by Kurdish forces in January.

IS has as yet to take responsibility for the bombing, which would be the first time that IS has staged an attack of this magnitude inside Turkey.

"Thus far, even without an IS claim of responsibility, the group seems the most likely perpetrator," said Charles Lister, an analyst at the Brookings Doha Centre.

"The attack method, the specific target and the political implications of the attack all point towards an IS motive, for now."

Turkey has now vowed to crack down on the group, with Davutoglu saying that a special cabinet meeting, looking at additional security measures for Turkey's border with Syria, had been scheduled for Wednesday.

"We will also discuss an action plan about additional security measures to be taken on our border at the cabinet meeting and will take necessary measures."

He vehemently denied suggestions from some commentators and Syrian Kurdish sources that Turkey and the ruling Justice and Development Party (AKP) had encouraged IS militants in the past.

"Turkey and AK Party governments have never had any direct or indirect connection with any terrorist organisation and never tolerated any terrorist group," he said.

Crackdown on IS in Turkey

A Turkish official also told MEE on Monday that the Ankara has been stepping up its anti-IS efforts, rounding up dozens of suspected members in Istanbul and other cities and closing down pro-IS websites.

However, hundreds of protesters gathered in Istanbul to protest over perceived government inaction.

MEE journalist Alex MacDonald, reporting from Istanbul, said that the situation escalated after Turkish police fired teargas to disperse peaceful crowds who had gathered to shout slogans including: “Killers, killers, we will not forgive.”

Aaron Stein, a non-resident fellow at Washington-based think tank the Atlantic Council, described Monday's attack as a "spillover of the Kurdish-IS fight" in Syria.

"Rather than targeting Turkey," Stein said the Suruc bombing appeared to be "more of an attack on Kurdish sympathisers of Kobane".

He likened the blast to an attack on a rally organised by Turkey's main pro-Kurdish party in Diyarbakir, which killed four people in June.

"We have seen an uptick in violence against Kurds in Turkey," he told AFP. 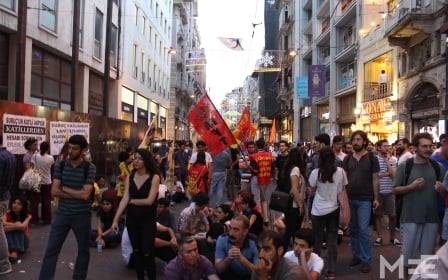 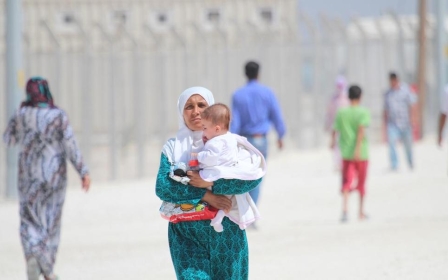