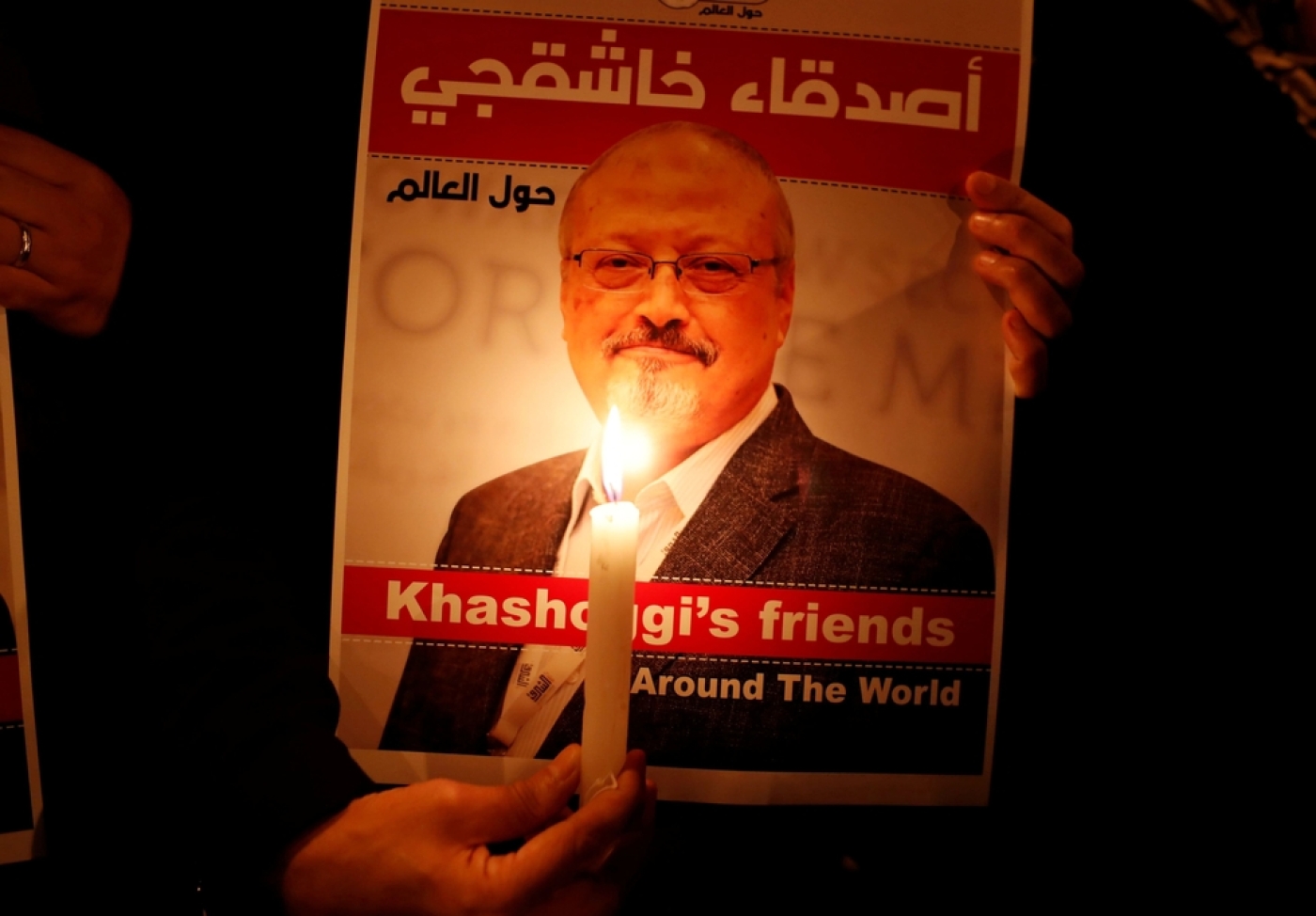 A demonstrator holds a poster with a picture of Saudi journalist Jamal Khashoggi outside the Saudi Arabia consulate in Istanbul, Turkey October 25, 2018 (Reuters)
By
MEE and agencies

Turkey has reiterated a call for Saudi Arabia to extradite 18 suspects accused of taking part in the assassination of prominent Saudi journalist Jamal Khashoggi.

Khashoggi, a Saudi insider-turned-critic and Washington Post columnist, was murdered at his country’s consulate in Istanbul on 2 October in an operation Saudi Arabia has since admitted was premeditated.

Saudi authorities have arrested 18 individuals in connection to the murder, including senior security officials who were members of the death squad that had flown to Istanbul prior to the murder.

Omer Celik, spokesman for the ruling Justice and Development Party (AKP), told a news conference on Wednesday that the suspects should face trial in Turkey because the crime was committed within its territory, an act which Turkey views as an attack on its sovereignty.

“The Saudi consulate is on Saudi territory but within the Republic of Turkey," he said, adding that human rights groups should attend the trial.

"We will do whatever it takes to bring the murder to light. We have shown the evidence to all those who wanted to see," Cavusoglu told the Turkish parliament.

Turkey previously said it would cooperate in an international investigation, and had called for the United Nations to launch a probe into what happened.

Last weekend, Turkey's President Recep Tayyip Erdogan acknowledged for the first time the existence of an audio recording of Khashoggi’s murder, and revealed it had been shared with United States, Britain, France, Germany and Saudi Arabia.

On Tuesday, he described the recording as “appalling”, and said that a Saudi intelligence officer was shocked when he listened to the audio. The officer said that whoever was responsible for the killing “must have taken heroin”, according to Erdogan.

A member of parliament from the opposition Republican People's Party (CHP), Engin Altay, said that the Turkish government did not share the Khashoggi murder recordings with parliament. He said that the government should inform parliament if necessary in a closed session of the General Assembly.

The chairman of the CHP, Kemal Kilicdaroglu, criticised Erdogan for failing to arrest the suspects before they fled to Saudi Arabia.

“You listened to these recordings before anyone else. So if you knew about the murder then why did you not arrest them, why did you let them be free? All these killers did not have diplomatic immunity,” he said on Wednesday, addressing his parliamentary group.

Canadian Prime Minister Justin Trudeau said on Monday that his country’s intelligence services had listened to the audio, though French Defence Minister Jean-Yves Le Drian denied his country’s had.

Erdogan's communications director then blasted Le Drian for the denial.

The UK’s foreign office told MEE “we are neither confirming nor denying the claims” that the recording had been shared with Britain.

The brutal killing of Khashoggi has tarnished the image of powerful Saudi Crown Prince Mohammed bin Salman, whose possible role in the assassination has been under heavy scrutiny.

A report published by the New York Times on Monday revealed that one of the members of the hit team, also a member of the crown prince's security detail, informed one of his superiors by phone to "tell your boss" that the operation was complete. The report implied that the boss in question was the crown prince himself.

Saudi Arabia has sacked two of bin Salman’s closest allies - deputy intelligence chief Ahmed al-Assiri and top aide Saud al-Qahtani - but insists the crown prince was not aware of the plot to kill Khashoggi and the subsequent cover-up.

Erdogan said in a Washington Post article earlier in November that the order to kill Khashoggi "came from the highest levels of the Saudi government".