The logos of the two main Egyptian opposition channels broadcast from Turkey, Al-Sharq (L) and Mekameleen (R) (Screengrab)
By
Ragip Soylu
in
Istanbul

Turkish authorities have requested Egyptian opposition channels based in the country to soften their criticism of the government of President Abdel Fattah el-Sisi amid a rapprochement between the two regional powers, sources have told Middle East Eye.

A senior Turkish government official who was briefed about the issue told MEE on Thursday that the heads of Mekameleen and Al-Sharq, two Egyptian satellite TV channels, were told to tone down their criticism of the Egyptian government.

"They were just asked to soften their political criticisms against the Egyptian government and stop personally attacking Sisi," the official said on condition of anonymity.

The official said "there is no need for panic" and allegations that Turkey was going to close down the channels were untrue.

Ankara has been at loggerheads with Cairo since the 2013 military coup led by then defence minister Sisi against his democratically elected predecessor, Mohamed Morsi.

Morsi was a leading member of the Muslim Brotherhood, Egypt's largest political movement - now crushed by Sisi. He was backed by Turkish President Recep Tayyip Erdogan, who had refused to acknowledge Sisi's legitimacy following the coup.

The two regional powers have also sparred over several issues in recent years, including the war in Libya, where they backed rival sides, and maritime disagreements.

As Sisi's government has banned all political opposition and independent media, many have fled into exile and launched channels abroad, mainly in Turkey, which has become a safe haven for members of the opposition and supporters of Morsi.

In recent weeks, however, statements from both sides have hinted at fresh efforts to mend relations through formal diplomatic contacts. According to the Turkish source, these efforts included the request to tone down criticism of Sisi's government by Istanbul-based opposition media.

No request to close channels

A senior source at Mekameleen TV told MEE the Turkish government had formally requested the channel to "adjust its editorial line in accordance with journalistic professionalism".

The source said the Turkish request came in light of Turkish and Egyptian attempts at rapprochement and a bid to end the diplomatic conflict between the two countries.

The source confirmed Turkey did not ask the channels to close down.

Meanwhile, the chairman of Al-Sharq channel, Ayman Nour, also a leading Egyptian opposition politician, said there was a degree of "exaggeration" in the reports about the Turkish requests. The move comes amid unprecedented international condemnation of Egypt's human rights record under Sisi, with 31 countries decrying his government's use of "terrorism" accusations against its political opposition. 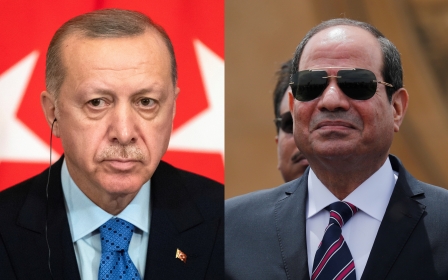