A US decision to arrest Turkish security guards involved in a brawl in Washington in May is a scandal, President Tayyip Erdogan said on Friday.

"This is a complete scandal. It is a scandalous sign of how justice works in the United States," Erdogan told reporters after prayers for the Muslim Eid al-Adha celebration.

His comments on Friday follow a fresh indictment from the US Justice Department against Turkish security personnel accused of assaulting protesters during a Washington visit by Erdogan in May.

A total of 19 people including Turkish security officials were identified from video footage of the 16 May clashes with Kurdish protesters outside the residence of Turkey's ambassador, following a meeting between Erdogan and President Donald Trump.

Three more names were added to the case on Tuesday after US officials said videos showed Turkish guards beating and kicking protesters on the ground in the "Embassy Row" section of downtown Washington.

The Turkish foreign ministry reacted angrily to the move in an earlier statement on Wednesday.

"We protest in the strongest terms that such an unjust and biased indictment, with names of people that have never been to the US, has been accepted," the ministry said, adding that it had conveyed its reaction to the US ambassador to Ankara.

Turkey "reserved the right to take action via legal means" against the charges, which the ministry said were "unfounded".

A total of 21 counts of assault and hate crimes based on the victims' ethnicity were levelled against the group by Washington DC district attorney Channing Phillips.

All but two of the 19 "security personnel and supporters of Erdogan" remain at large. Two Turkish-American businessmen were arrested in June for their roles in the clash with protesters.

Of the 17 others, two are Canadians, and the remaining are Turkish citizens.

Relations between Ankara and Washington have been strained over the US arming Syrian Kurdish militia fighting against the Islamic State group in northern Syria.

The clashes during Erdogan's visit exacerbated tensions between the NATO allies, with the Turkish leader accusing US police of having allowed "terrorists" to protest "50 metres from me".

The Turkish foreign ministry repeated Ankara's criticisms of "serious negligence" by US security authorities who did not "secure our delegation's safety".

It also reiterated its claims that the protesters were supporters of the outlawed Kurdistan Workers' Party (PKK), which has been waging an insurgency in Turkey since 1984. 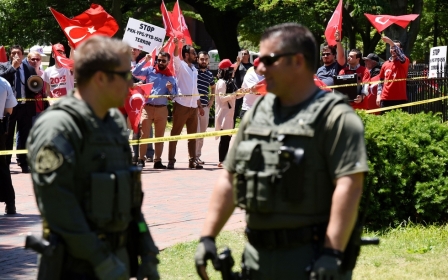 Diplomacy
US indicts 19 over brawl during Erdogan's visit to Washington

Crime
Erdogan attacks US charges against aides for embassy brawl