Turkey's defence ministry said on Thursday that Ankara had struck 500 Kurdish militant targets in northern Iraq as part of an operation against the Kurdistan Workers' Party (PKK).

Turkish howitzers and warplanes, including drones and fighter jets, struck various parts of northern Iraq on Sunday and Tuesday in two separate raids.

Ankara named the operation "Claw-Tiger" and said the attacks in Iraq's Haftanin region were in response to an increase in militant attacks on Turkish army bases in Iraq.

"The Claw-Tiger Operation is going very well. God willing, by continuing with the same seriousness and determination, we will conclude the operation with success," the statement cited Minister of Defence Hulusi Akar as saying.

In the last two years, the Turkish military has increased its foothold in northern Iraq by adding more ad-hoc bases and outposts, which first began to be established in the 1990s. Iraq's Kurdistan Regional Government (KRG) has largely tolerated their presence.

The PKK is headquartered in the Qandil Mountains near the Iraq-Iran border, a terrain Turkish land forces have struggled to effectively operate in.

A Turkish official told Middle East Eye on Wednesday that "Claw-Tiger" was a continuation of other recent operations that have established direct control in important valleys and hills and disrupted PKK movements from Iraq to Turkey.

Turkey regularly attacks PKK fighters, both in its mainly Kurdish southeast and in northern Iraq, where the group is based. It has also warned in recent years of a potential ground offensive against PKK bases in Iraq's Qandil mountains.

Also on Tuesday, Turkish aircraft and Iranian artillery simultaneously targeted the town of Haji Omeran near Iraq’s Erbil, according to Sky News Arabia, raising the possibility that the two sides coordinated their operation.

Recent Turkish drone strikes and operations have led to speculation that Ankara is setting the stage for a large ground offensive against PKK headquarters. 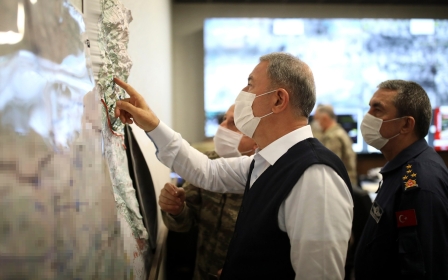