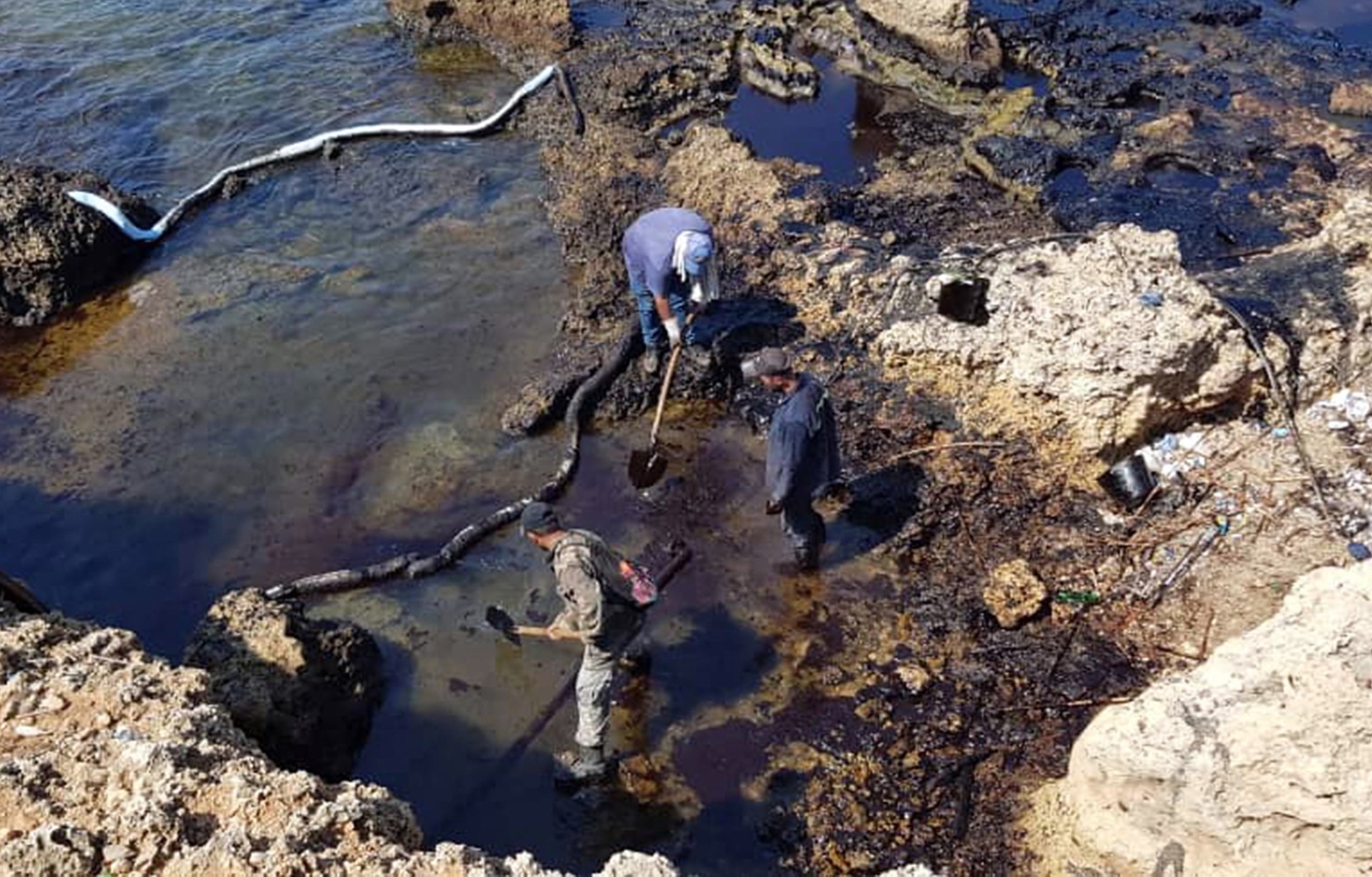 Turkey has been preparing for an oil-containment operation at sea as a large slick creeps towards its shores, with Syria having already used sand, reeds and what appears to be chemicals to disperse oil from its coastline.

A fuel tank holding around 12,000 cubic metres of fuel at Syria's run-down Baniyas thermal power plant on the government-controlled west coast began to leak into the Mediterranean on 23 August.

The oil released has since moved west towards Cyprus, but weather is now pushing the roughly 900-square kilometre slick northwards.

Given the trajectory of the spill, Turkish authorities readied two tug boats late on Wednesday in the Gulf of Iskenderun, in Turkey’s southeast, though one environmental expert told Middle East Eye that wind and current changes mean "anything can happen in the coming days".

Turkey also dispatched four tow boats and oil collection ships to clean up any oil near the coast of Turkish-occupied Northern Cyprus on Wednesday, the Turkish transportation minister Adil Karaismailoglu said, though the bulk of the slick seemed to be moving away from the breakaway region.

"There isn't any pollution in Cypriot or Turkish shores yet," the minister said in a written statement.

Two of the Turkish boats have been working on a small part of the oil spill near Cyprus since Wednesday. The two others will arrive on Friday.

Turkish drones and satellites are also closely following the situation. One Turkish Cypriot official told local media that some of the oil had already dispersed into the sea, which will likely have a long-lasting impact on underwater flora and fauna. The World Wide Fund for Nature (WWF) warned on Wednesday that the spill could have "potentially devastating consequences for marine biodiversity and ecosystems" in the Mediterranean, adding that it "poses serious risks also for the communities and businesses that depend on tourism and marine resources for their livelihoods".

The effects of the spill will be felt for more than a decade, Mauro Randone, coordinator of the Sustainable Blue Economy Programme at the WWF Mediterranean Marine Initiative, told MEE: "The minimum is 15 years, and then you go upwards from there.”

Authorities from the internationally recognised Greek Cypriot government in the south said on Wednesday that they were "constantly monitoring and evaluating the situation" but that they had not heard from counterparts in the north, despite a willingness to coordinate efforts.

"Our authorities have been announcing throughout this time, that they are monitoring, following up and evaluating the situation of the oil spill, which is an another way of saying 'We will not take any action unless the pollution reaches our shores'," Natasa Ioannou, a marine biologist at Friends of the Earth Cyprus, told MEE.

"This outrages the environmental community because Cyprus has the necessary means to battle the pollution on the high seas and collect the oil in international waters, but no coordinated efforts were made to prevent this horrible event."

The Turkish government has sent emergency help to the Turkish Republic of Northern Cyprus, including a 1100 metre-long sea barrier and several advisers, to help with any necessary clean-up in the north.

Authorities said they were planning to clear remnants of the spill "within three days" using "burlap" and "reeds" as well as sand, diggers and other machinery.

Using reeds is "obviously not a standard procedure", said Randone of WWF. "They need to be disposed of safely."

Most of the oil reportedly has settled in shallow and rocky waters near Baniyas and Jableh.

Randone was concerned by the lack of safety equipment of the teams photographed out on the ground, leaving them vulnerable to potentially harmful side-effects. "They are often in shorts and the oil is in direct contact with the skin," he said. "It's quite scary."

One photo posted on Facebook showed a man standing on the Syrian shoreline covered in what appeared to be oil.

The head of the General Company for Electricity Generation in Baniyas told Sana that a team was pumping fuel from the leaking tank at Baniyas into other tanks, and that the operation would take until around 9 September.

Out to sea, a video published on Saturday showed men on a boat named the Bosra al-Sham spraying liquid into the waters near Baniyas.

An accompanying article said that a "pollution control boat" was "dissipating materials for oil slicks".

This, according to Randone, is "most probably" a reference to chemicals sometimes used in the aftermath of oil spills.

WWF and other environmental groups oppose the dispersal of oil with chemicals, which have been used after many of the major oil spills over recent decades, including Exxon Valdez and Deepwater Horizon.

The technique doesn't get rid of the oil, it merely disperses it down. So birds might be spared, but sealife likely won’t.

"You're not removing it," said Randone, "you're potentially creating another problem."

The preferred method of clearance out at sea is to use a "boom", a floating barrier that contains the oil, then deploy what's known as a "skimmer" to hoover up the trapped oil on the water’s surface.

The Syrian government had boom and skimmer boats in 2011, according to a report published that year by International Tanker Owners Pollution Federation Limited, a non-profit promoting best practice after oil or chemical spills.

No Sana reports in recent days mentioned the use of booms or skimmers, however.

"A draft national contingency plan for oil... was prepared in 2003," the report added, "but it was never tested or exercised."

'It wasn't a big surprise'

Before 2011, the Baniyas refinery provided 20 percent of Syria's fuel needs and was one of five in the country.

But the decade-long conflict in Syria has led to a "structural collapse" of the county's energy infrastructure, Wim Zwijnenburg, project leader at Pax, a Dutch NGO, told MEE.

Though Syria's two functioning oil refineries, in Baniyas and Homs, remain under the control of Damascus, they have been targeted by attacks in recent years, and the country's oil resources in the east are held by Kurdish-led forces and the US military.

Oil production has plummeted during the fighting, and Syria's oil pipelines have been hit by armed groups, with Iranian ships delivering oil to Syria, which is under US sanctions and reliant on its eastern neighbour.

In June 2019, for example, an alleged attack on underwater pipelines in Baniyas led to a month-long oil slicks.

Baniyas has seen a marked increase in spills and dumping of oil-contaminated wastewater in recent years, added Zwijnenburg.

So though he wasn’t expecting a slick like this, "it wasn't a big surprise".

"We're probably going to see more spills coming from the ships delivering oil if nothing's fixed," he added. "It will be just waiting for the next incident to happen." 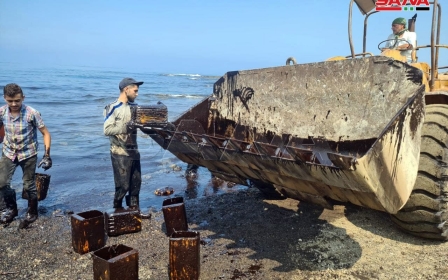 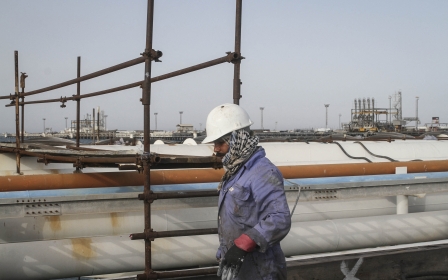