Turkish forces exchanged fire Sunday with militants from al-Qaeda's former Syrian affiliate on the border of Idlib province, a monitor and eyewitnesses said, a day after Ankara announced an imminent operation there.

On Sunday morning, HTS opened fire on Turkish forces removing part of a wall along the border between Turkey and Idlib province, eyewitnesses and the Syrian Observatory for Human Rights monitor said.

"A group of HTS opened fire on the vehicle removing part of the wall, and the Turks returned fire and also shelled the area," one eyewitness on the border told AFP.

The UK-based Observatory reported "heavy exchanges of fire" and said the fighting was continuing, but that the incident did not appear to mark the start of the operation Erdogan described on Saturday.

Idlib and surrounding areas of northwest Syria are among the largest bastions for rebel groups fighting Syrian President Bashar al-Assad but have increasingly fallen under the sway of al-Qaeda-linked rebel factions.

"Now this step has been taken, and it is underway," he said, adding that Turkish forces were not yet involved and that it was a rebel operation so far, but that Free Syrian Army forces had already begun the operation.

Video sent to Middle East Eye from an activist in Idlib appeared to show forces in Turkish military vehicles entering the border village of Atme from the district of Reyhanli:

The Hamza Brigade, also part of the Turkey-backed Euphrates Shield, posted video online of what it said was a convoy of its forces heading for Idlib.

Idlib fell to a coalition of rebel forces in 2014, but since 2017 the province has been dominated by HTS, a rebrand of al-Nusra Front, the former al-Qaeda affiliate in Syria.

In a video statement posted online, the Hamza Brigade announced its intention to drive HTS from Idlib:

Residents near the Bab al-Hawa border crossing with Turkey in Syria sent Reuters photographs of what they said was a section of the frontier wall being removed by the Turkish authorities.

Idlib province is among the four "de-escalation zones" announced in May by the Syrian government's international allies and rebels to set up truces in various parts of Syria.

On 15 September, Russia and Iran, allies of the Syrian government, and Turkey, backed by the rebels, announced that they would jointly deploy forces in Idlib, without setting a date.

HTS has pledged to keep fighting Syrian government forces and their allies, casting doubt on the de-escalation agreement, but Ankara has worked to lure militants from it, and two groups have defected from the alliance.

On Saturday, HTS warned "treacherous factions that stand by the side of the Russian occupier" should only enter the area if they want "their mothers to be bereaved, their children to be orphaned, their wives to be widowed".

The de-escalation initiative must pave the way for a lasting ceasefire in the country, ravaged by six years of war that have left more than 330,000 dead and millions displaced and refugees.

Turkey conducted a military operation in northern Syria between August 2016 and March 2017 in order to repel the Islamic State group and the Kurdish militias that Ankara considers terrorists.

Since the end of the operation, Ankara has often said it is ready to launch a new military operation in Syria, saying it will "not allow" the creation of a "terrorist corridor" on its border.

Erdogan said on Saturday that Turkey will not abandon the many civilians who fled from Aleppo to Idlib, where Assad government forces and Russia have been carrying out continuous air strikes in recent weeks, leaving hundreds dead. 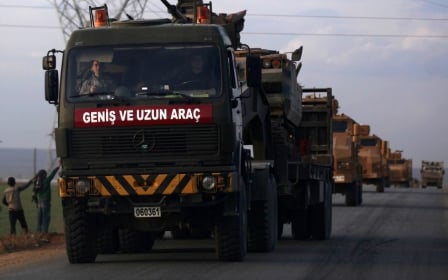