Turkey waits on results as voting closes in landmark election Turkish voters have cast the final votes in the country's milestone presidential and parliamentary elections after voting closed on Sunday afternoon amid allegations about voter interference.

The main opposition Republican People's Party (CHP) and pro-Kurdish People's Democratic Party (HDP) have filed complaints about interference in southeastern Turkey's Sanliurfa district, where there were reports of election monitors being beaten and voters kept out of polling stations.

Turkey's election born told state-run Anadolu Agency that "judicial, legal and administrative steps" had been taken regarding those concerns and that the election was going smoothly.

Anadolu also reported that four people were being charged with trying to cast fake votes and that 10 foreigners "attempted to interfere" with voting by posing as election monitors without the correct accreditation.

Local media also reported that an official from the nationalist Iyi party and two others were killed in violence at a polling station in Turkey's Erzurum province.

There are no exit polls in Turkey, which also has an election-day broadcast ban, but results are expected to filter through by Sunday evening.

Recep Tayyip Erdogan has remained the clear favourite to win the presidential race, which would see him emerge with new executive powers granted by the 2016 referendum that saw Turkey vote to move to a presidential system.

Erdogan and his closest rival, Muharrem Ince of the secular Republican People’s Party (CHP),  both went on the offensive in the final days of the campaign, speaking to up to five rallies a day.

With this system, we will achieve what others cannot imagine

"God willing, Turkey will start flying with this system ... With this system, we will achieve what others cannot imagine," Erdogan said at a rally in Istanbul on Saturday morning.

The banners and posters that had decorated Turkey for weeks were pulled down on Saturday afternoon, in line with rules that block campaigning and restrict reporting on election day.

The race is expected to be most closely contested in parliament, where the AKP and its Nationalist Movement Party (MHP) ally are trying to achieve a majority that would secure Erdogan's authority.

Polls are undecided about whether the AKP can meet that goal. An opposition majority would mean Erdogan facing greater opposition from parliament and potentially an attempt to revert to a parliamentary system.

Turkey's voter turnout has historically been relatively high, reaching 80 percent at the last election, and the same was expected for Sunday's vote.

There have however been concerns raised about voter fairness, with the pro-Kurdish People's Democratic Party (HDP) announcing they would be filing a complaint after sharing a video they claimed showed electoral fraud in the southeastern Urfa district.

Voter fairness NGO Oy Ve Otesi (Vote and Beyond), was founded in 2014 and said its ability to mobilise volunteers to monitor voting at polling stations has increased with every election, as more Turks become engaged in the voting process.

"People are getting more and more focused on the security of the vote and transparency of the elections," board member Sevan Camlidag told Middle East Eye.

She said one of the key roles for their volunteers will be to ensure election officials stamp all ballots.

Previously, ballots unstamped by officials had to be discarded, but that was changed by a new election law that allows the votes to stand if the lack of stamp is adjudged to be a mistake. The opposition has claimed that could lead to voter fraud.

Pictures on social media also appeared to show voters in southeastern areas walking to ballot centres after they were relocated "for security reasons".

The HDP has complained about the measure, which it said disproportionately affects Kurdish voters.

There has also been criticism raised over the ongoing imprisonment of HDP leader Selahattin Demirtas, charged with having links to the outlawed Kurdistan Workers’ Party.

Demirtas had to campaign from his prison cell through social media, and HDP claims that around 10,000 of its supporters and activists have been arrested since the end of the Kurdish peace process in 2015, impacting its ability to campaign.

Only in the final week before the election was Demirtas able to twice make appearances on TV.

The HDP's success has been highlighted as a key factor in the election because of a 10 per cent voter threshold parties have to reach in order to take up their seats in parliament. If they fail to reach that goal, many of their seats are expected to go to AKP, which could guarantee it a majority in parliament.

Recent economic troubles have been expected to play a major role in voting intentions after the Turkish lira dropped to record lows against the US dollar and inflation surged over the past year.

However, Turkey's economic growth has remained among the highest of developing countries, and unemployment has dropped 1.6 per cent over the past year.

While Erdogan's opponents accuse him of a risky economic policy that has weakened Turkey, his supporters insist Turkey's infrastructure has improved manyfold under Erdogan and the AKP.

The opposition has frequently complained about the nature of media coverage, accusing the pro-Erdogan bulk of the media of a "blackout" that has damaged the chances for a fair election.

"There are 5 million people in Maltepe right now but none of the TV channels can show it," Ince said on Saturday.

The figures he claimed could not be independently verified, but images circulating on social media showed vast crowds of people assembled to hear Ince speak.

Amnesty International and press freedom watchdog Reporters Without Borders have both questioned whether the election can be considered fair because of the alleged lack of press freedom.

Competing narratives have dominated the competitive election campaign, especially as political parties coalesced into pro- and anti-AKP coalitions, and are expected to play a large role in how people vote.

Erdogan and AKP supporters have dismissed allegations they will tamper with the election results, highlighting that those claims contradicted the opposition's insistence that the AKP will lose its majority.

How those narratives will play out amongst the electorate has remained unclear, with the various polling companies accused of promoting their own political intentions. 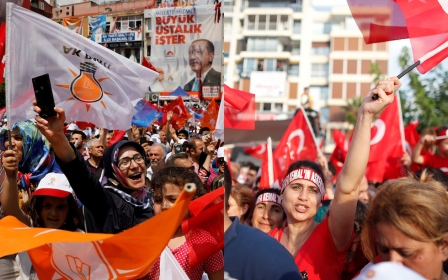