Rumours that the PKK has been starting Turkey's devastating fires have spread as quickly as the flames themselves, and brought angry villagers to the streets 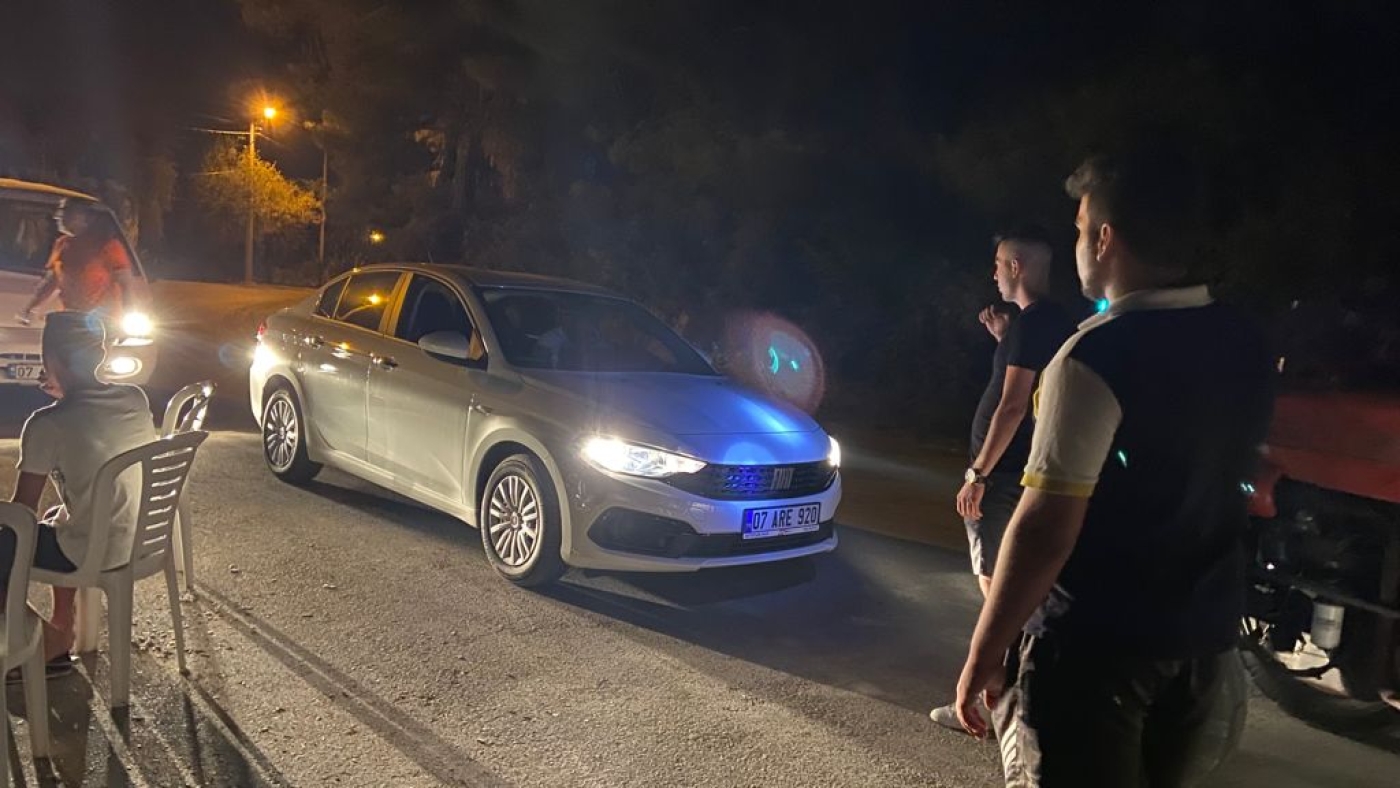 The village of Dogancay in southern Turkey’s Antalya was hours away from being consumed by fire, then the wind changed direction.

Today its residents are determined to keep it safe. From the fires that have ravaged swathes of Turkey, yes, but also from the perceived threat of Kurdish militant arsonists.

“It is impossible that the fire began on its own!” a man at the village entrance snapped at another, who had been trying to tell these would-be vigilantes that climate change was the real culprit.

'It is the PKK, the terrorists, who burned our forest and homes. It is positive! No need to discuss further'

A young boy, barely 16, shouted back: “It is the PKK, the terrorists, who burned our forest and homes. It is positive! No need to discuss further.”

Middle East Eye spent a febrile August night with villagers in Antalya, men who have taken it upon themselves to police their neighbourhoods and check passing cars. Everyone MEE spoke to did so only on condition of anonymity, fearing retribution.

Antalya’s vigilantes believe that the PKK, a Kurdish militant group designated as a terrorist group by both Turkey and the EU, is behind the wildfires, a growing opinion on social media with scant evidence to back it up.

In recent days, Turkey has been battling to extinguish wildfires that erupted in more than 100 different places across the country. The internationally renowned tourism destinations Antalya and Mugla have been hit worse than any other region.

In this southern village, the tension is palpable. Villagers appear close to turning on each other amid rumours on social media that some PKK militants were filmed igniting fires. They pass around videos of men in forests, positive that these are arsonists.

Such rumours have spread as quickly as the fires themselves. Though no evidence has been uncovered of PKK involvement, belief the Kurdish militants are behind the wildfires is widespread.

Suspicions have been compounded by a mysterious new group called Children of Fire claiming responsibility for the fires and alleging it is a PKK splinter group. Again this group has offered no evidence it is responsible or connected to the Kurdish militants. 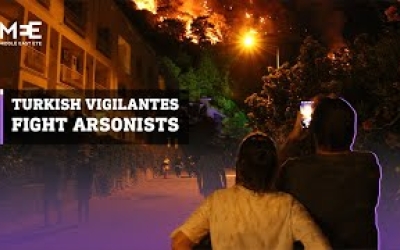 Meanwhile, people pointing to climate change and the fact that fires are similarly devastating other nearby countries, including Greece, have been denounced online as PKK sympathisers.

According to the government, some people have been arrested on suspicion of igniting fires. President Recep Tayyip Erdogan said the relatives of those arrested had connections to the PKK.

“A few decades ago, Americans bought our olive trees and gave us pines instead. Now, the PKK, serving America, can easily ignite a fire in the pine forests,” said a young man from Dogancay at a makeshift roadblock.

The idea that the United States manufactured the crisis with the PKK is disagreed with by some villagers listening in, but all present insist the Kurdish group is behind the crisis.

In the belief that Kurdish arsonists were a threat to their towns and villages, people in the south last week - some carrying weapons - began patrolling streets to prevent strangers from accessing areas vulnerable to fire.

But the gendarmerie has repeatedly warned them that it is illegal to stop cars, check ID cards and question people. The government also urged people to stay calm and not to walk around their villages with arms.

Some villagers have been filmed holding guns and chanting that they would not allow anybody to pass through.

In Dogancam, residents were similarly resolute.

“This is my village. We have been living here for a thousand years. If someone wants to start a fire, I will fight him,” one man said. “I can’t accept that they set fire to the forest, killed thousands of animals! If the state can’t stop them, we’ll defend our village on our own!”

Another villager said: “Many homes were burnt. Cows and goats died. Crops are gone. What are these people going to eat? How can we sit and watch some men firing our forest?”

Usually strangers are more than welcome in Turkey’s coastal towns and villages - places of outstanding natural beauty that rely on tourism as a chief part of the economy.

Two weeks ago, residents were positive about the return of tourists after last year’s pandemic-hit season. With Covid-related restrictions and curfews lifted, business was at its height. Now most tourists have fled.

In Dogancam, the atmosphere began to sour when some villagers began to accuse the international media of spreading false news.

As Middle East Eye left, passing through nearby Cevizler, the car was stopped by a group of young men shining torches into the vehicle. 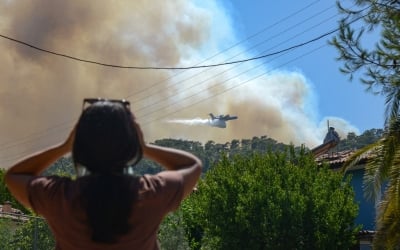 “We are here to prevent the infiltration of terrorists. If a car doesn’t stop, we’ll go after it,” a young man holding a torch said.

In Cevizler, deep-seated ethnic tensions were boiling over. “There are many Kurds living here,” a young man said, referring to Kurdish citizens who commonly spend a few weeks working on the coast during tourist season.

“I don’t say they are PKK members but they vote for HDP,” he added, referring to the pro-Kurdish opposition party. In his view, he said, voting for the HDP is sufficient to label a person PKK sympathiser.

“There are PKK sympathisers everywhere. We are positive that it is the PKK,” he added.

The mood in Cevizler was generally placid. Cars came and went, with youths peering inside and asking why they were heading into the wooded areas.

Things changed, however, when MEE attempted to take a photograph. Suddenly the youths became agitated, explaining the gendarmerie had told them they would be arrested if they continued to mimic policemen.

With the villagers increasingly disturbed, it was time to leave.

On the coast, a hotel owner from Sanlıurfa, a southern city with a mixed population of Turks, Kurds and Arabs, bemoaned the ethnic tensions.

“This tension is artificial,” he said. “Young people are so ignorant that they believe that every Kurd supports the PKK.”

One Kurdish shop owner in central Manavgat said he braved people’s suspicions and the blaze to aid those caught up in the disaster.

“As soon as I heard the news, I went to the burning villages to help people,” he said.

'This tension is artificial. Young people are so ignorant that they believe that every Kurd supports the PKK'

According to the shop owner, litter and neglect from residents contributed to the fires, rather than anything more nefarious.

“Everybody drinks a bottle of beer in the forest and throws the bottle away, including the villagers, then the bottles cause fire,” he said.

“Nobody cares about forests, then they accuse Kurds. This is not fair at all.”

The owner of a nearby restaurant said he believes jobs are the real root of the tensions.

“The tension is not ethnic, but economic,” he told MEE. “Kurdish people come here and do any type of job just to earn money. But job opportunities are scarce.” 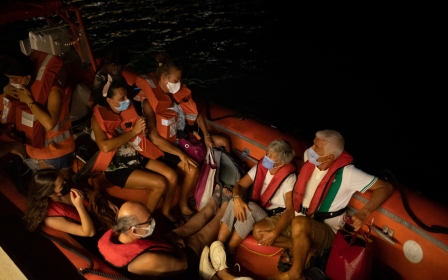 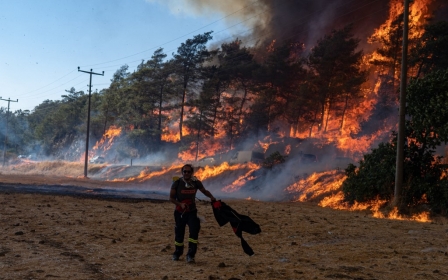