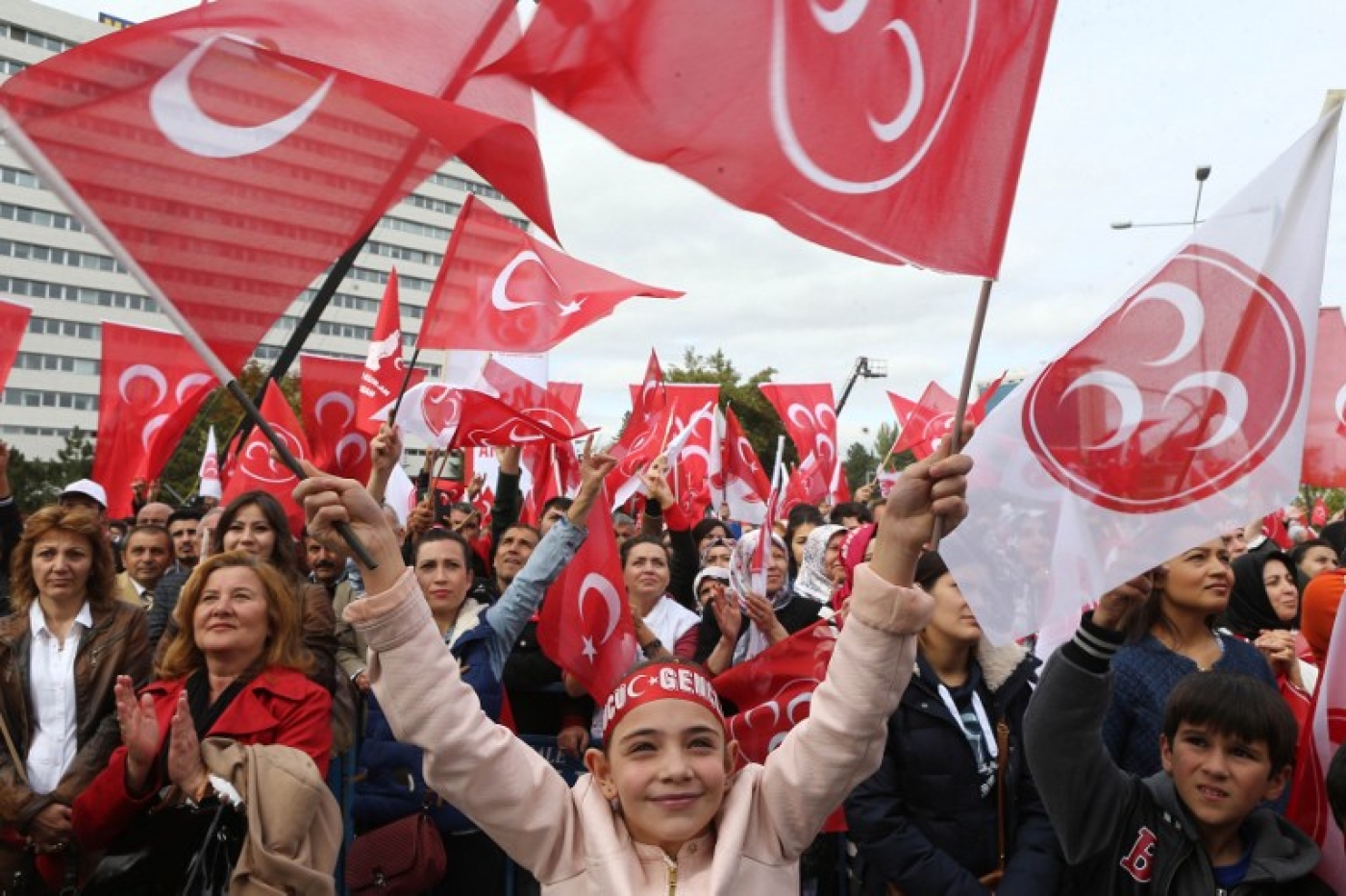 MHP leader Devlet Bahceli announced last week that his party would be voting in favour of the 18-article constitutional reform package that aims to create an executive presidency in the upcoming referendum scheduled for 16 April.

The move - which brought the party into what seems like an alliance with the AKP - has been justified by party leaders as an essential step in the face of national security threats.

“We will say yes to the changes to ensure that the legislation of laws and the execution of decisions are faster and more effective in the face of grave threats facing our country,” MHP Ankara provincial head Fatih Cetinkaya told Middle East Eye.

According to Cetinkaya, Turkey's current constitution is plagued by structural issues that have hindered the government from taking quick decisions in the past.

'Our principle is and always has been, our country and the state first, then our party and ourselves' - MHP Ankara provincial head Fatih Cetinkaya

Like many MHP leaders and supporters, who often refer to themselves as 'ulkuculer' or 'principalists,' Centinkaya used nationalist rhetoric to explain his party’s stance.

“By voting ‘Yes’ we will be contributing to the survival of our nation and the establishment of an independent future,” he said.

“Our principle is and always has been, our country and the state first, then our party and ourselves," said Cetinkaya. "What our leader has chosen, and what we have all agreed to do, is in line with these principles."

Turkish media reported that the ruling party had promised MHP ministers certain positions within the government if they offered their support for the amendments.

But party leaders dismissed the news as false rumours.

"There is no exchange in this decision. We are doing what is right for our nation, the state and the people," Mehmet Gunal, MHP vice chairman on foreign affairs told MEE.

Centinkaya denies that the MHP forged an alliance with Erdogan or AKP as a party.

“This move was never about bolstering AKP’s political future or being on their side. This move is about the continuation of the state, its freedom and independence.”

Despite MHP leaders refuting claims that the party had formed an official alliance with the AKP, experts say that without MHP support, the AKP would not have been able to pass the bill in parliament last month.

Most members and supporters are in favour of the official party line on the referendum, with many believing that a strong leader with centralised powers is necessary in the face of both attacks by the Islamic State (IS) group, Kurdish militants and the 15 July coup attempts.

Others, however, fear that an executive presidency may give too much power to Erdogan and say it does not fall in line with the party's principles.

MHP deputy chair Semih Yalcin admitted earlier this week that the party’s base includes people who plan to vote “no” in the upcoming constitutional referendum.

A group of dissident MHP members announced last week that they had formed a committee that will campaign against the amendments in the upcoming referendum.

In response to the announcement, the party referred the four members leading the committee - Meral Aksener, Sinan Ogan, Koray Aydın and Umit Ozdag - to its disciplinary board on Tuesday.

One of the dissident MHP members, Ogan, announced he would be launching a TV station to campaign against the amendments.

He condemned the party's move as detrimental to nationalism and democracy and claimed it contradicted the principles of the MHP.

Translation: The leadership of [MHP] will justify their 'yes' vote' by claiming to support the continuity of Turkish identity, but they are in fact the ones who will bring'Turkishness' down.

Translation: Democracy is being undermined as a presidential executive is being instated. Who knows what they will do next.

Ogan also announced that the committee had been in touch with other right-wing parties including the Islamic-based Saadet (Felicity) Party and the ultra-nationalist Great Union Party (BBP) about supporting the no-vote campaign.

"As the centre and right-wing parties are the ones who decide the future of this country, we will build a centre-right front to stand up to these amendments," he added.

Former MHP deputy chairman Atilia Kaya, who resigned from his position earlier this month over Bahceli's support for the AKP-proposed amendments, also called on party supporters to vote against the changes.

Translation: Being able to say "No" is an indication of a strong personality and of courage. It is the brave ones that listen to their conscience.

NO voters 'comparable to terrorists'

Party leaders, including party leader Bahceli, compared MHP dissidents who joined the ‘No’ coalition to PKK members and Gulenists (FETO), both of which are considered terrorist organisations by Turkey.

Critics of MHP's support for the AKP are siding with the PKK terrorists and FETO, Turkish media reported Bahceli as saying last week.

Cetinkaya agreed: “Those who say NO are comparable to supporters of the PKK and FETO," accusing the no voters of causing polarisation and chaos.

Hitting back at party leaders, Ogan declared over satellite TV on Saturday that Bahceli's comments caused an "uproar among MHP supporters".

"I believe 95 percent of the party’s voters will vote against the constitutional amendments," he added.

Indeed, some MHP supporters have already made up their minds and plan to vote against the amendments.

"I feel this move is against our principles as a party. Even though our leader will vote for the amendments, I believe that voting against them is truer to our core values as principalists," said 31-year-old Hakan from Ankara.

Hakan, who has voted for MHP all his life, fears that that the fierce language against 'no voters' will deepen polarisation within the country.

"Erdogan and Bahceli are likening those who plan to vote against the constitutional change to 15 July coup plotters," said Hakan. "I fell ostracised."

While MHP's support facilitated the passage of the AKP-propposed amendment package in parliament on 21 January, the party's leadership has not always been supportive of Erdogan.

In 2013, the party led massive demonstrations in Turkey over the decision by the government to begin peace talks with the Kurdistan Workers Party (PKK), an organisation largely viewed by MHP supporters as the nation's number-one enemy.

MHP leader Bahceli was also strongly opposed to a presidential system and refused to ally with the AKP  in a coalition government after the ruling party lost its parliamentary majority for the first time in 13 years in the June 2015 elections. The AKP was then forced to hold early elections in November of the same year, where it eventually won more than 49 percent of the votes.

It is for these reasons that observers were surprised at the quick turn around in the party's decision to support the amendments.

“MHP was very opposed to any amendments before the November elections," Durgun told MEE.

After seeing a sharp fall in its votes in the November 2015 elections and the AKP’s U-turn on Kurdish policies however, the party chose to side with the AKP and be part of the government.

Furthermore the failed coup prepared the ground for the MHP to offer its support to the AKP, using the argument of forging unity against domestic and foreign enemies.

"The coup attempt changed the party's direction and Bahceli suddenly came out in support of the amendments. He saw it as a national security issue," she added.

MHP vice chairman on foreign affairs Gunal agreed: “It is the national security issue that has brought AKP and MHP closer together.”

Despite alleging a clear divergence from AKP policies, today MHP leaders speaking on issues of domestic and foreign issues - including military intervention in Syria and Iraq or accession to the EU - sound very similar to the ruling party. 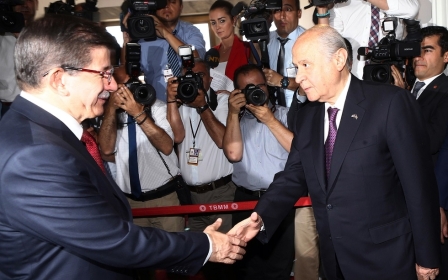 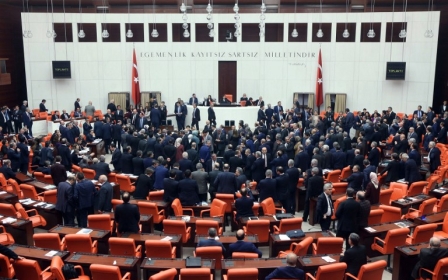 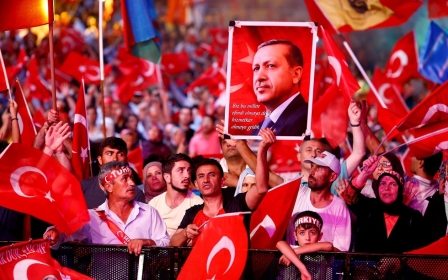