A senior Turkish general has declared the operation to remove Islamic State from the Syrian town of al-Bab is "over", as a monitor reported the deaths of 24 mostly civilians in the city on Thursday as a result of Turkish shelling.

“Good news! The al-Bab operation is over,” said General Hulusi Akara, Turkey's chief of general staff during a trip to Qatar, according to a report in the pro-government Sabah newspaper.

Akar added that two large bomb traps had been destroyed and that further cleansing efforts were under way in the region.

Some commentators ridiculed the claim, however. Julian Ropcke, political editor of Germany's Bild newspaper, described it as "a 100 percent lie".

Again: Turkish troops have not entered a square meter of urban al-Bab.
To say the operation "has been completed" is a 100% lie.

A spokesperson for the Free Syrian Army-aligned Sham Front also said that Turkish-supported forces only held 40 percent of the city and that they “have not been able to advance into the city centre”.

Haithem Hamou told the Syria Direct news site that fighting had “never paused” over the past week and his fighters were "still dug-in inside al-Bab".

Turkey's prime minister, Binali Yildirim, said on Tuesday that Turkish forces had taken control of most of al-Bab, which the YPG had also announced plans to liberate.

"Al-Bab has been largely taken under control. Our aim is to prevent the opening of corridors from territories controlled by terrorist organisations to Turkey," Yildirim said in a speech to politicians from his ruling Justice and Development party (AKP) in parliament.

That is really bad for the reliability of TR military, if has any. All reports on the ground say FSA has not yet reached al-Bab city center. https://t.co/mwGFvwlQot

However, the UK-based Syrian Observatory for Human Rights said IS remained in control of the town.

"Battles continue on the outskirts and entry points...of al-Bab between Islamic State and the Turkish forces and the Euphrates Shield factions, amid advances by the latter in the area," the Observatory said.

"The organisation still controls most of al-Bab," it added.

The Turkey-backed rebels have been pressing a major offensive on al-Bab, 30km south of the Turkish border, since November. The advance risks putting them in direct conflict with Syrian government forces who are closing in on the city from the south.

President Tayyip Erdogan and other Turkish leaders have been saying for weeks that the al-Bab offensive was nearing an end.

Turkish attacks on the city have claimed a high civilian death toll - the SOHR said on Thursday that 24 people, mainly women and children, had died in as a result of Turkish shelling and airstrikes. However, the Turkish military said they had killed 15 "terrorists".

SOHR claimed that hundreds of civilians had been killed by Turkish shelling and air strikes since the beginning of operation Euphrates Shield.

Further east along the border, Turkey's security forces killed a member of the Syrian Kurdish YPG militia on Monday when they returned fire from Nusaybin into Syrian territory controlled by the group, the Turkish army said.

Elsewhere in Syria, in-fighting between militant groups has seen scores of fighters in the west of the country executed in an increasingly bloody battle between different rebel groups, the SITE Intelligence Group said.

An offshoot of the Jund al-Aqsa group killed more than 150 members of rebel factions in the village of Khan Sheikhoun in southern Idlib province, the US-based monitoring service reported on Wednesday.

Dozens of those executed were members of a Free Syrian Army (FSA) faction, it said, citing a pro al-Qaeda social media outlet.

The rest included members of the Tahrir al-Sham alliance, which includes the former al-Qaeda branch in Syria, Jabhat Fateh al-Sham.

Fighting between Jund al-Aqsa and Tahrir al-Sham has flared in the past week, in clashes that war monitors say have killed dozens.

Those clashes have added to the complexity of insurgent infighting in the west of the country.

More than 310,000 people have been killed in Syria since the conflict began in March 2011 with anti-government protests.

The war has displaced over half the country's population and drawn in militants and international militaries.

Syrian government negotiator Bashar Jaafari said the peace talks in the Kazakhstan capital of Astana had not produced any new agreement because of the "irresponsible" late arrival of rebel participants.

Russia, which backs President Bashar al-Assad's government, and Turkey, which supports the rebels, are brokering the talks, which started in the Kazakh capital on Thursday, a day later than originally planned after the late arrival of Syrian rebel negotiators. 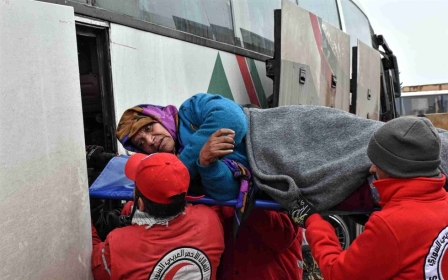