For the first time in Turkey's political history, 21 female deputies were able to take the parliamentary oaths while wearing the headscarf.

A total of 96 women won seats in Turkey’s Grand National Assembly in the 7 June elections, bringing the proportion of female deputies to a historic high of 17 percent, compared with 14 percent after the 2011 elections.

Much of the attention has concentrated on the tale of former deputy Merve Kavakci and her sister Ravza Kavakci Kan.

Kavakcı was the first headscarf-wearer to attempt to take up her position in parliament in 1999 but her move drew harsh responses from Democratic Left Party (DSP) deputies who insisted “she get out” at the time and prevented her from taking the oath.

Sixteen years later, her sister Kavakci Kan attempted to level that incident by entering parliament while wearing the same headscarf her sister had worn when she stood up to take her oath, only to be booed down.

Translation: Ravza Kavakci, wears a similar outfit to her sister Merve's when she was lynched in parliament 16 years ago.

Kavakci, an academic who studied in the US due to a headscarf ban at public institutions in Turkey, was elected as a deputy with the now defunct Virtue Party in 1999. Today, her sister Kavakci Kan also an academic, is the Justice and Development Party's deputy for Istanbul.

The scene at Tuesday’s oath-sweating were a world away from those witnessed 16 years ago.

Back then, as Kavakci entered the plenary session of the parliament to take her oath, deputies from other parties, specifically the Democratic Left Party (DSP) which was one of the leading forces in Turkish politics at the time, protested her entrance into parliament.

According to the Daily Sabah newspaper, then Prime Minister and DSP Chairman Bulent Ecevit proceeded to deliver a speech criticising Kavakci.

"Here [the Parliament] is not a place to challenge the state. Please bring this lady into line," Ecevit had reportedly said at the time.

Kavakci was then expelled from Parliament, her citizenship revoked and her parliamentary title automatically rescinded.

According to the newspaper, Kavakci’s house was also raided by a public prosecutor and she was banned from taking up any political role in Turkey for a period of five years.

The move, which came shortly after Turkey’s 28 February coup - in which the military forced the conservative Welfare (Refah) Party government to resign in 1998 - was later used as pretext for banning the Virtue Party by the Constitutional Court in 2001.

After the military forced the Welfare-led government out of power, the Constitutional Court closed down the Welfare party in January 1998 on the basis that it was founded on religious ideology. Most of the Welfare party's deputies regrouped in the Virtue Party behind a new leadership.

Until recently Turkish laws regulated the dress codes of state employees and prohibited the donning of headscarves, along with other religious and ideological symbols, such as facial hair.

The headscarf ban was lifted in October 2013, with the exception for employees in the military, police and judiciary. A month later, on 31 October, four AKP deputies attended parliamentary sessions while wearing their headscarves, which effectively ended the ban in the parliament as well.

The oath-taking ceremony of the deputies elected in the 7 June general election to serve as legislators marked the first session of the 25th parliamentary term in Ankara.

The ceremony also launched the countdown for the Turkish parliament to form a coalition government in the absence of a single-party majority. 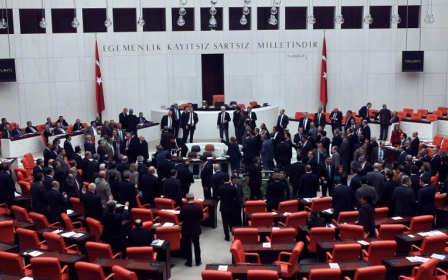