Paul Manafort, then adviser to Donald Trump's presidential campaign, is now serving a jail sentence for tax and bank fraud (AFP)
By
Ragip Soylu
in
Ankara

Turkish Foreign Minister Mevlut Cavusoglu has denied that he received payments from a controversial American political operative to lobby European politicians in an effort to improve Ukraine's image in 2012 and 2013.

The allegation was first reported by the Organized Crime and Corruption Reporting Project (OCCRP) this week, based on leaked emails belonging to lobbyist Paul Manafort who served as US President Donald Trump's campaign chairman in 2016.

Manafort is now serving a prison sentence for tax and bank fraud charges, which were filed as part of an investigation into Russian meddling in the 2016 US presidential elections.

Manafort, according to OCCRP, wanted to run a campaign to convince European politicians that Ukraine’s jailing of a prominent opposition leader shouldn’t block Kiev from signing an association agreement with the European Union.

As part of the strategy, Cavusoglu, former chairman of the Parliamentary Assembly of the Council of Europe and a Turkish parliamentarian, was allegedly hired to lobby the diplomatic circles, charges Cavusoglu denied on Thursday.

“The allegations reported by OCCRP aren’t aligned with the reality. Thank God, I have never been in any position in my political career that I cannot account for,” Cavusoglu said in a written statement to Turkish media.

The foreign minister sought to downplay OCCRP's credibility, highlighting that it receives funding from the famed hedge fund investor and philanthropist George Soros, whom the Turkish president has accused of stirring up activism.

“I first heard Paul Manafort’s name when he had been sentenced in the US,” he added.

Cavusoglu's statements came as Turkey's main opposition leader Kemal Kilicdaroglu from the Republican People’s Party (CHP) and his associates piled on criticism of the foreign minister over the allegations.

Earlier in the week, the CHP’s parliamentary whip Ozgur Ozel told reporters that Cavusoglu should make an immediate public statement.

“Startling allegations. His silence is troubling. Every minute passing by is strengthening the allegations. Their silence is harming the reputation of the country,” he said on Wednesday. According to OCCRP's report, Serhiy Lovochkin, a Ukrainian member of parliament and head of the country's largest opposition party, funded Manafort’s campaign. Lovochkin, between 2010 and 2013, was chief of staff to then-president Viktor Yanukovych, who was overthrown by mass protests.

The report alleges that Cavusoglu was scheduled to receive €230,000 for his work which included “secretly lobbying” while observing Ukraine’s 2012 parliamentary elections as a PACE mission member.

“Cavusoglu publicly advocated for the association agreement, while urging politicians not to criticise Ukraine’s government over the [Ukrainian opposition leader Yulia] Tymoshenko case. He also gave positive reviews of the elections to media, contrary to assessments by international observation groups - including his own - that noted serious irregularities,” the report says.

Cavusoglu acknowledged in his statement that he had established a good friendship with Lovochkin and his brother. “I joined in about 30 election observation missions. The assessments took place in the joint report,” he said.

Cavusoglu also said, as he had in the past, he would continue to support the integration of Ukraine and Eastern European countries into institutions like Nato and the European Council. Inside Turkey
Pro-Kurdish mayor and deputy arrested in southeastern Turkey 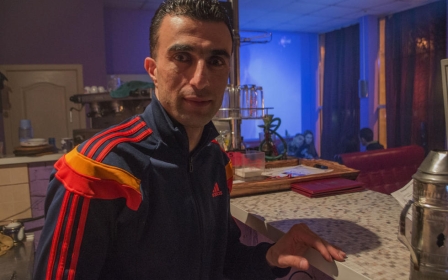