Mevlut Cavusoglu said Moscow could not have a 'more loyal' friend, as he says countries and Iran must work together to find political solution A political solution for Syria can only be reached through close co-operation between Turkey, Russia and Iran, Russian media quoted the Turkish foreign minister Mevlut Cavusoglu as saying on Thursday.

"The Syrian problem cannot be solved militarily in a short time," Cavusoglu was quoted as saying on Thursday by Russia's Sputnik News.

"And it cannot be arbitrated unilaterally. That's why we have to work together on a political regulation that will allow a ceasefire."

Cavusoglu also said Moscow could not find a "more loyal" friend than Turkey.

Cavusoglu was also quoted as warning that, if a political solution is not reached soon, "terror groups" active in Syria will pose a threat to "the whole world".

"If we do not eliminate these [groups], the wave of terror will continue to spread throughout the world and will threaten Turkey, Russia, Europe and the whole world".

Turkey has recently been hit by a number of mass casualty bombings for which Islamic State (IS) has claimed responsibility.

It has also suffered a number of attacks blamed on the PKK, which it deems a "terrorist organisation" and accuses of having links to Kurdish groups active against IS in Syria.

Cavusoglu also said he was "convinced" that Turkey could count on support from Russia and Iran on keeping its borders with Syria secure.

"We are convinced that Russia and Iran will support us when it comes to security, the Syrian borders and territorial integrity. I am sure that our co-operation will bring about a settlement."

Russia and Iran are key backers of Syrian President Bashar al-Assad, while Turkey has been considered a bastion of support for the armed groups fighting against him, leaving the states at loggerheads.

Turkey and Russia have also been involved in a dramatic rift after Turkey shot down a Russian fighter jet over Syria late last year.

The incident caused the severing of diplomatic relations, as well as a sharp drop in the number of Russian tourists visiting Turkey.

The rift began to heal in June, however, when Turkey, in a shock move, officially apologised for shooting down the jet.

Cavusoglu also on Thursday held a telephone call with his US counterpart John Kerry, in which the pair discussed the latest developments in Syria, particularly around the flashpoint town of Manbij, where US-backed rebels are fighting against IS with back-up from intensive air strikes by the US-led coalition. 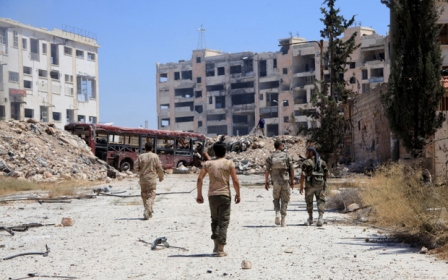