Turkish rival parties support Syria in what they view as a struggle against imperialist forces, as Assad accuses Erdogan of supporting terrorism Members of the ultranationalist Homeland Party (Vatan Partisi), a Turkish political faction that does not have any representatives in parliament, met with Syrian President Bashar al-Assad on 28 February.

According to SANA, the Syrian official news agency, Assad met with VP’s leader Dogu Perincek and an accompanying delegation of Turkish members of various parties at the presidential palace in Damascus.

Vatan Partisi had its roots in the Workers Party (IP), before changing its name recently. Perincek, an outspoken critic of President Recep Tayyep Erdogan’s Justice and Development (AKP) party’s policy on Syria, was accompanied by former deputy prime minister Abdullatif Sener, who was a founder and former member of the AKP.

Birgul Ayman Guler, who had recently resigned from the opposition Republican People’s Party (CHP), was also present on the delegation.

Perincek was mired in controversy in 2007 when, during a series of talks in Switzerland, he was charged by a Swiss court for calling the Armenian genocide an international lie. The European Court of Human Rights ruled in favour of Perincek, but the Swiss court has filed for an appeal case in late January.

Perincek views the civil war in Syria as a struggle between Assad and imperialist forces. The meeting in Damascus lasted for two hours, with Perincek and the Syrian president both agreeing on the importance of dialogue and of cooperating closely with each other, in order to ensure the territorial integrity of both countries.

“Disintegration of Syria means disintegration of Turkey,” the Dogan news agency quoted Assad saying on Tuesday. Assad stressed that it is only the Turks and the Syrians who can decide on their future, not those outside of the region, and called on the Turkish people to pressure their government against supporting “takfiri forces” in Syria.

Assad accused Erdogan of providing support for the Islamic State and other extremist forces in Syria, calling his actions “a destructive policy that does not serve at all the interest of his people.”

“This is what the Turkish government under President Recep Tayyip Erdogan is doing, providing support to extremist and takfiri forces to win the favour of his masters though implementing their plots,” he said, referring to the United States and Saudi Arabia's shared policies and alliance on Syria.

SANA reported that Perincek described his meeting with Assad as “great, honest, and friendly.”

Perincek believes Erdogan and his Prime Minister Ahmet Davutoglu are on the road to destroy the secular republic of Turkey, adding that the countries lined up against the Syrian government will lose the battle in the region.

This is not the first time that Turkish opposition political factions made their way to Syria during the ongoing conflict. Rival parties of AKP have viewed Erdogan’s Syria policy with suspicion and some have visited Assad at his behest.

Nazmi Gur, an MP from the Peoples’ Democratic Party (HDP) has previously accused the AKP of supporting the Islamic State on the basis that they refused to investigate the threat that IS activities in neighbouring Syria presented to Turkey. The Syrian-Turkish border has been a conduit for smuggling weapons and fighters into Syria, but is now under heavier restriction.

In March 2013, a delegation from the main opposition Republican People’s Party (CHP) met with Assad after he invited them to see him.

He added that there was “a need to distinguish between the stance of the Turkish people, who back stability in Syria, and the positions of Erdogan’s government, which supports terrorism.”

“He also has children and a wife,” Erdogan said, speaking on the same day the CHP meeting with Assad took place. “The moment he changed, we deleted him from our life, because those who tyrannise their own people in this way cannot be our friend.”

Turkish columnist Mustafa Akyol has previously explained that the close affinity between CHP and the Assad government boils down to a number of essential elements.

Sectarianism, ideology and the prioritising of state authority over civilian lives are all common factors. In the same way the Alawites hold key positions in the Syrian government and security services, the Alevis make up the bulk of CHP and the two minorities share commonalities and are sympathetic to each other.

“The ideologies [of] the CHP and the Assad regime, Kemalism and Baathism, share important similarities,” Akyol wrote. “Both envision a secular and nationalist single-party state, in which opposition to the ruling party counts as high treason.” 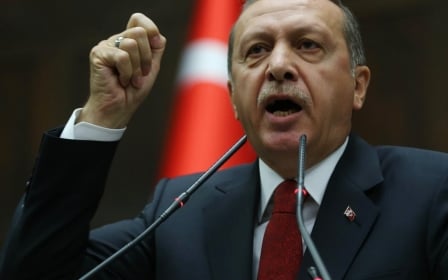