With the majority of Turkey supporting the offensive against the Kurds, dissenters face arrest and censure Turkey's usually fractious political landscape stood largely unified on Thursday, as most of the major political parties threw their weight behind the Turkish army's offensive in northeastern Syria.

Kemal Kilicdaroglu, leader of the main opposition Republican People's Party (CHP), set aside his usual criticisms of President Recep Tayyip Erdogan's policies to call on Operation Spring of Peace to "be completed successfully as soon as possible".

Meanwhile, the recently elected CHP Mayor of Istanbul Ekrem Imamoglu said: "We are always with our Armed Forces and Mehmetcikler [soldiers]."

This has left opponents of Turkish military action, be they politicians, activists and media workers, feeling somewhat isolated.

The loudest voice in opposition to Operation Spring of Peace, which aims to push the Kurdish People's Protection Units (YPG) militia from the Turkish border, came from the left-wing, pro-Kurdish Peoples' Democracy Party (HDP).

"The racist, expansionist, militarist and anti-Kurdish policies adopted by the AKP [Justice and Development Party] government are the greatest obstacle to the possible end of the Syrian civil war and a democratic political solution," said HDP co-leader Sezai Temelli, speaking at a press conference on Thursday.

Following a similar statement released on Wednesday, the official Anadolu Agency (AA) reported that prosecutors had launched an investigation against Temelli and the HDP's other co-leader, Pervin Buldan, accusing them of "carrying out propaganda for a terrorist organisation" and "openly insulting Turkey's government".

AA added that three other HDP lawmakers were also being investigated over similar charges, including former hunger striker Leyla Guven.

Street demonstrations have taken place, or are set to take place, across the globe in opposition to Turkey's operation. But despite the country's reputation as a hotbed for activism, there has been a relatively muted response from domestic anti-war activists to the operation.

One left-wing activist told Middle East Eye it was "too dangerous" to be openly critical, citing the arrests that had already been made.

In Mardin, 21 people were detained over social media posts about the operation, on suspicion of "inciting the public to enmity and hatred" and "propagandising for a terrorist organisation".

Turkey's interior minister announced on Friday that "necessary action" had been taken against around 500 people "who defined our country as an invader on social media".

He added that around 121 had been detained across Turkey to prevent public demonstrations against the operation.

The governor of Kocaeli announced on Thursday that all events and demonstrations would be banned for 15 days "upon receiving serious unconfirmed information suggesting an imminent disturbance of public order and public safety".

In the mainly Kurdish city of Diyarbakir, demonstrations have been met with arrests and water cannons.

The monitoring site NetBlocks also confirmed that Twitter, Facebook, WhatsApp and Instagram had all been blocked in parts of southern Turkey, including Gaziantep, Sanliurfa and Hatay.

Ertugrul Kurkcu, honorary president of the HDP, told MEE that he understood the fears that opponents of the operation had.

"Unfortunately the grip of the government and government-sponsored media on anti-war activists and anti-war protests is growing and it is becoming more of a matter of courage to come out and openly say ‘no to war’," he said.

"It will take some time for an anti-war wave to come out - maybe only after some difficulties arise during Turkey's handling of this issue."

Kurkcu, a veteran leftist who has spent much of his life in jail for his political activity, added that he himself was already facing a sentence of two years in jail pending appeal for comments made in 2016, and was set to testify in his case in court on Monday.

Apart from politicians and activists, a number of media outlets have also started to feel the pressure.

Fatih Gokhan Diler, managing editor of the Diken news site, and Hakan Demir, the Digital Services Manager of the BirGun newspaper and news site, were both detained on Thursday before being released with international travel bans.

Demir's lawyer said his client had been charged with "inciting the public into enmity and hatred" over comments made about the Turkish military operation.

In a statement on Friday, the Radio and Television Supreme Council (RTUK), Turkey's main broadcast regulator, said it would be "silencing" broadcasts that were "foreign-based, divisive, destructive and supported by the terrorist organisation".

"We will not tolerate broadcasts that serve the purpose of terrorism, that might mislead our citizens with false and biased information," the organisation said.

A number of human rights organisations and professional bodies have released statements against the operation in Syria despite the stigma.

On Thursday, the Turkish Human Rights Association and the Human Rights Foundation of Turkey released a joint statement criticising the war as a cynical political ploy.

"The military offensive launched into northeastern Syria yesterday without deriving even the slightest lesson from what is happening today is imposed on the society as if it was an indisputable necessity," read the statement.

"Its reason, on the other hand, is quite clear: the political power’s need
to manufacture social consent as it struggles with governance problems due to the economic, social and political crisis brought about by the erroneous policies pursued, notably those we have mentioned above."

They also criticised Turkey's plan to repatriate millions of Syrian refugees into areas taken from the YPG in northern Syria as going against the Geneva Convention.

"What is at stake is millions of people, not a simple item of cargo," they said.

A group of nine bar associations also called for an end to the conflict on Friday in a joint statement on Friday.

"It is possible that Turkey can militarily win this war, which it started by taking the whole world on itself; but, it needs to be remembered that 'war does not determine who is right, but who is weak'," they said.

So far, however, public opinion in Turkey has appeared to be behind the operation.

Since 1984, the conflict with the Kurdistan Workers Party (PKK) has claimed more 40,000 lives and most Turks regard the YPG as largely the same organisation. Following a deadly attack on Thursday on the city of Sanliurfa by the YPG which killed six civilians including a nine-month-old baby and an 11-year-old girl, the hashtag #BabyKillerPKK began trending across Turkish social media.

Apart from the HDP, whose parliamentarians, members and local politicians have long faced imprisonment for a variety of reasons, no major political party has spoken out against Operation Spring of Peace.

Kurkcu said that he was not disappointed, as there had been similar positions taken during previous Turkish operations in northern Syria, such as Operation Euphrates Shield in 2016 and Operation Olive Branch in 2018.

"Some of the democratic community in Turkey were hoping after the [2019] Istanbul elections that some of the CHP could think twice because of the election alliance that they had formed with the Kurds of Istanbul - but no, their former pattern repeated itself," he said.

"So it’s not surprising." 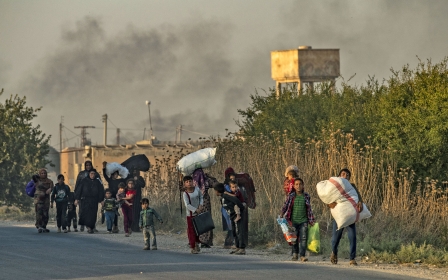 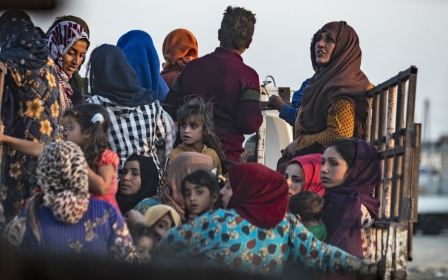