Recep Tayyip Erdogan says project has been discussed with his US counterpart, in latest Turkish attempt to set up Syrian 'safe zone' Turkish President Recep Tayyip Erdogan has suggested building a new city in northern Syria to house some of the millions of refugees escaping the country's civil war, reports said Saturday.

Erdogan said in a speech in Istanbul late on Friday that the new city would be located near the Turkish border and said he had discussed the idea with US President Barack Obama.

"I am going to tell you something. What is the solution? We found a city in the north of Syria," said Erdogan, quoted by the Anatolia news agency.

He said that the city would be 4,500sq/km in area and its infrastructure could be built in cooperation with the international community.

Refugees from Syria could be "resettled" there, he said. Such an area would make the city comparable to some of the largest urban centres in the United States.

"We have discussed this with Mr Obama and even set the coordinates, but it has not yet come to fruition," said Erdogan. He gave no timescale for how the project could be realised.

Turkey has repeatedly sought to persuade its Western allies to help create a so-called safe zone inside Syria that could house Syrian refugees, but this appears to to be the first time that Erdogan has proposed building a permanent city in which they could be housed.

Turkey is currently home to an estimated 2.7 million Syria refugees who have fled the five-year civil war, and it has complained of the lack of international support in looking after them.

Human Rights Watch on Friday criticised a deal between the EU and Turkey for the former to pay the latter more than $3bn and grant political concessions to Turkey, in exchange for Ankara stepping up efforts to curb the flow of migrants and refugees to Europe.

The group warned that Turkey did not provide "effective protection for refugees and has repeatedly pushed asylum seekers back to Syria".

“EU leaders are in a panic to stop refugee flows before spring, and they seem willing to throw human rights overboard in the process,” said Judith Sunderland, acting deputy director for the Europe and Central Asia division of Human Rights Watch.

“It is naked self-interest and wishful thinking to say Turkey is a safe country of asylum – it is not, and this deal could cause much more harm than good.” 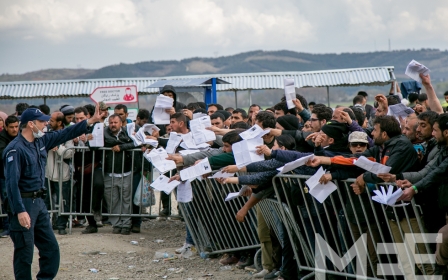