US Secretary of State John Kerry told a press conference in Ankara on Friday that Turkey’s participation in a coalition to tackle Islamic State (IS) militancy has not yet been decided.

Kerry, who spoke to reporters after a meeting with Turkish leaders, said that Turkey “stands with the coalition against IS”, but that its participation in a military campaign to rout the group remains undecided.

He had met with Turkey’s Foreign Minister Mevlut Cavusoglu, as well as Prime Minister Ahmet Davutoglu and President Recep Tayyip Erdogan, in an effort to muster up regional support for a US-led “broad coalition” against the militants.

Speaking after the meeting, Prime Minister Davutoglu described the US action in Iraq as “necessary”, but said that it was not sufficient to establish political stability in the country, which shares a 330-km border with Iraq.

Turkey is seen as a crucial in the fight against IS, which controls large parts of Syria and has seized territory in the oil-rich north of Iraq, and the US is keen to secure its support.

However, Turkey said on Thursday that it will not allow the use of its air bases for the launching of strikes against IS.

Turkish officials have expressed concerns over the country's role in any efforts to tackle IS in case it might jeopardise the security of some 49 Turkish nationals - including a senior diplomat - held by the militants since June, after they seized the Turkish consulate in Mosul.

Erdogan has warned against risking efforts to have them released.

Kerry will remain in Turkey on Saturday, and then continue his tour of the region to continue lobbying regional powers to sign up to the coalition, which the US claims has 40 supporters internationally so far.

After a two-day NATO Summit in Wales last week, US Defence Secretary Chuck Hagel arrived in Ankara to discuss Turkey's contribution to the US-led coalition against IS threat with Turkish officials.

Hagel said during the visit that Turkey would play a role in the fight against IS, but that the country's "limitations" would be respected.

"They want to play roles, specific roles. They will play those. (They) will be articulated by the Turkish government - not by me - when that decision is made," he added.

On Wednesday, US Secretary of State John Kerry discussed the ongoing Iraq, Syria and Gaza conflicts with King Abdullah of Jordan during a visit to the Jordanian capital Amman, while he visited Saudi Arabia on Thursday to secure Arab support.

This came after US President Barack Obama announced extended bombing raids against IS targets in Iraq and authorised them in Syria for the first time. He said the United States would work with regional allies to tackle the threat.

Turkey openly joined the anti-IS coalition but is believed to be wary of involving itself in direct military activity. Ankara has allowed the use of the İncirlik airbase for humanitarian and strategic purposes, but not for conducting military strikes. 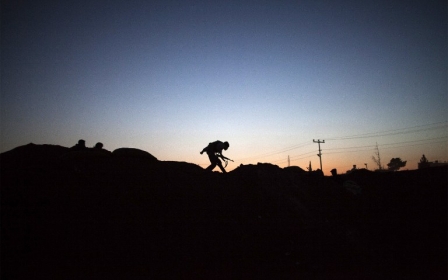