Search comes amid signs Saudi position on journalist's disappearance is shifting, as Trump speculates 'rogue killers' could be responsible 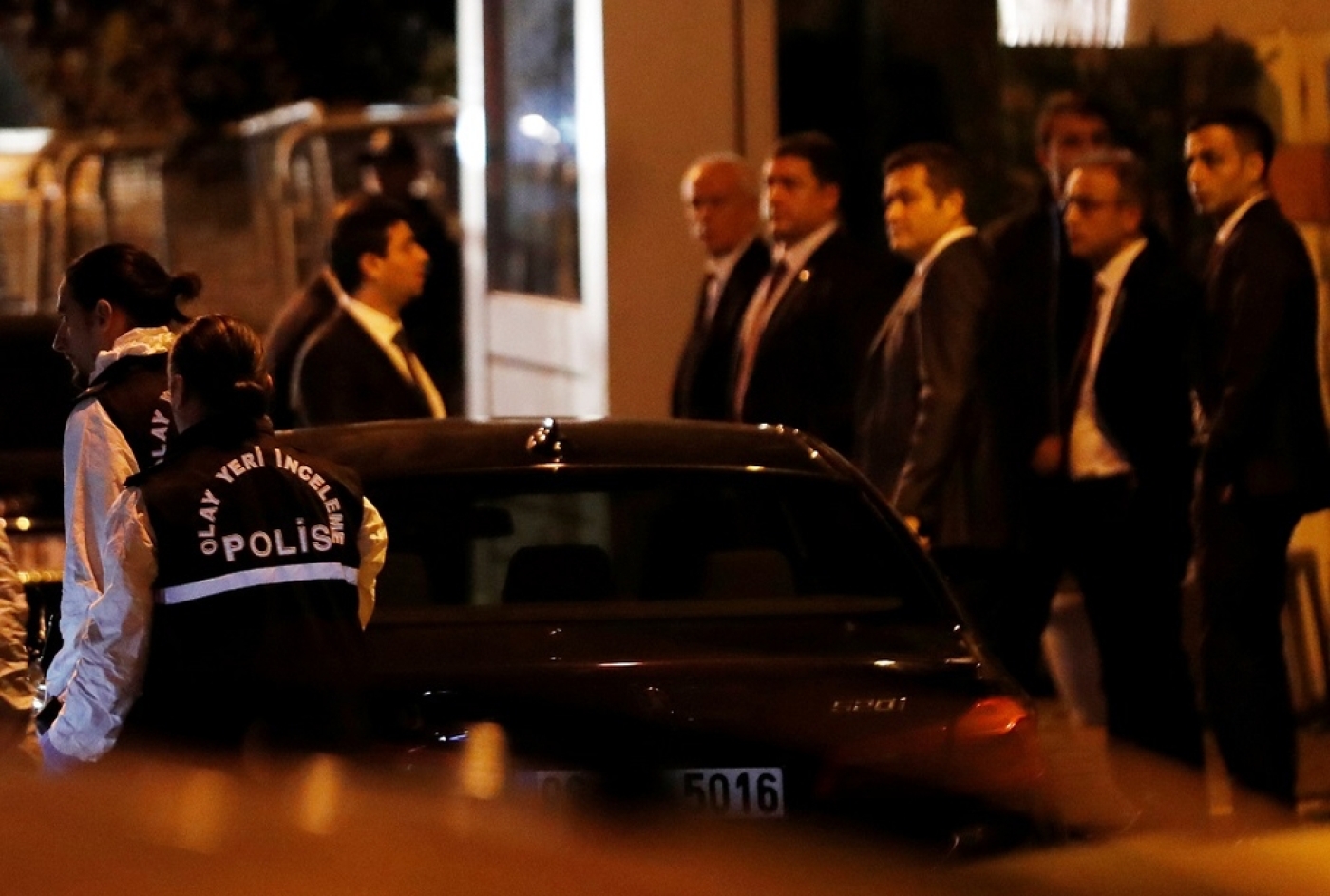 A team of Turkish police investigators and prosecutors on Tuesday left the Saudi consulate in Istanbul after conducting an unprecedented eight-hour night-time search following the disappearance of Saudi journalist Jamal Khashoggi.

The Turkish team, which conducted the investigation alongside a Saudi delegation, returned to their vehicles and left the premises, an AFP correspondent said.

They took samples with them, including soil from the consulate garden that was loaded into vans, one official present said.

Middle East Eye understands that the Turkish team is led by a deputy prosecutor general who is usually responsible for terrorism crimes.

The prosecutor earlier entered the building with a police officer for a preliminary investigation before returning to the headquarters of Turkey's MIT intelligence agency.

He returned later in the day with a full team of investigators.

A Saudi team of investigators also entered the premises earlier on Monday. They appeared still to be inside as the search was conducted, AFP reported.

Turkish officials have confirmed to MEE that the consulate, the house of the consul-general and diplomatic cars will be searched by investigators.

On Monday, the Turkish team arrived at the premises in a motorcade of six cars, according to AFP. Some police were in uniform while other officials were in suits carrying printers and files.

The search of the building comes as Saudi officials appeared to be taking a new line over the disappearance of the journalist since he visited the consulate on 2 October.

On Monday, a Saudi official told Bloomberg that an internal investigation into the disappearance and presumed murder of the Saudi critic and Washington Post columnist had been opened, which apparently could hold those deemed responsible to account.

Later the same day, US President Donald Trump talked up the possibility that "rogue killers" may be behind Khashoggi's alleged death.

Sources close to the Turkish investigation told MEE that Khashoggi was tortured, murdered and dismembered after entering the building to obtain divorce papers.

Khashoggi had turned from Saudi royal court insider to enemy of the kingdom's rulers almost overnight in 2017, when he made remarks at a Washington think tank on the kingdom's relationship with the Trump administration.

The veteran journalist told Middle East Eye shortly before his death that a close aide of Crown Prince Mohammed bin Salman contacted Khashoggi personally following his remarks in Washington, telling him he was no longer permitted to tweet or write, an order coming from the very top.

Spooked, Khashoggi left the kingdom, writing columns in the Washington Post critical of some Saudi government policies and living between the US capital and Istanbul, where he was last seen entering his country's consulate.

The Turkish authorities are said to have video and audio recordings of Khashoggi’s death, and have identified a hit squad of 15 Saudis that travelled to Istanbul on the day of the journalist’s disappearance.

Sources told MEE that the Turkish authorities do not trust the Saudis, and expect them to disrupt and impede the investigations if they can.

A senior Turkish source said on Monday that the interior of the consulate had been repainted since Khashoggi’s disappearance.

Further suspicions have been raised by the sight of professional cleaners entering the Saudi consulate on Monday.

According to Turkish sources, investigators were not given access to the consulate previously because the Saudis were unwilling to allow a probe into the consul-general's house. The Saudis were also enraged by leaks of the identities of the 15 Saudi suspects to the Turkish media.

Jeremy Hunt, the UK's foreign minister, reiterated a call on Monday for a thorough investigation into what happened.

"We have been urging Saudi Arabia to cooperate fully with the investigation. There remain questions about the disappearance of Mr. Khashoggi that only Saudi Arabia can answer," Hunt said.

Saudi Arabia’s internal investigation and its acceptance of Turkish demands to search the consulate follow top official Khaled bin Faisal’s trip to Turkey on Friday and a conversation between President Recep Tayyip Erdogan and King Salman on Sunday.

According to a source, bin Faisal, the governor of Mecca and a trusted lieutenant of King Salman, attempted on Friday to quash the fallout of Khashoggi’s alleged murder with Turkish help.

“He literally begged the president to save them,” a Turkish source told MEE.

According to the source, Turkey demanded total cooperation from the Saudis in return.

The Turks insisted that the Saudis tell them where Khashoggi’s body is buried, the source said. 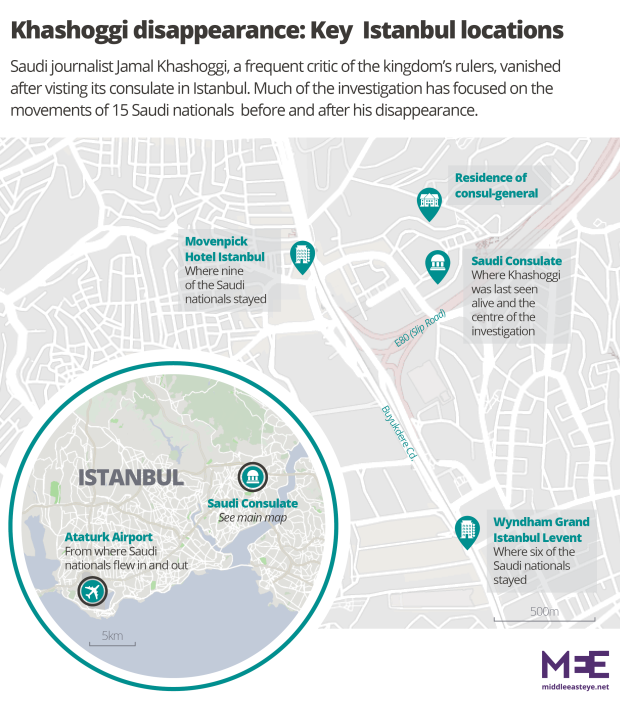 However, Saudi reluctance to immediately acquiesce has frustrated Turkey, with Turkish Foreign Minister Mevlut Cavusoglu accusing the Saudi side on Saturday of failing to cooperate.

"We still have not seen cooperation in order to ensure a smooth investigation and to bring everything to light. We want to see this," Cavusoglu said.

Over the weekend, however, King Salman ordered the public prosecutor to open an internal investigation into Khashoggi’s fate, partly in response to new information provided by Turkish authorities, Bloomberg reported.

On Monday, Trump announced that his secretary of state, Mike Pompeo, was heading to Riyadh to meet King Salman over the matter.

Pompeo will go to Turkey after visiting Saudi Arabia, a National Security Council spokesman said on Monday, as reported by Reuters.

"It is absolutely essential that Turkish authorities, with full and transparent support from the government of Saudi Arabia, are able to conduct a thorough investigation and officially release the results of that investigation when concluded," the spokesperson said.

Following Trump's phone call to King Salman and the opening of the Saudi internal investigation, the US president appeared to suggest that rogue elements within the Saudi state may have been behind Khashoggi's alleged murder.

"The denial was very, very strong," he told reporters at the White House. "It sounded to me like maybe these could have been rogue killers. Who knows?"

Chris Murphy, a US Democratic senator and member of the Senate Foreign Relations Committee, described that theory as "ridiculous".

"Been hearing the ridiculous 'rogue killers' theory was where the Saudis would go with this. Absolutely extraordinary [sic] they were able to enlist the president of the United States as their PR agent to float it," he wrote on Twitter.

Been hearing the ridiculous “rogue killers” theory was where the Saudis would go with this. Absolutely extaordinary they were able to enlist the President of the United States as their PR agent to float it. https://t.co/ChRFyleneR

On Sunday, the Saudi stock market plummeted seven percent at one stage, as investors fretted over Riyadh’s worsening relations with the international community.

Several business leaders have pulled out of a financial summit due to be held in Saudi Arabia later this month dubbed “Davos in the desert”.

Meanwhile, Trump warned that there would be “severe punishment” if it were concluded that the Saudis were responsible for Khashoggi’s death.

There will be a very strong congressional response if, in fact, Saudis lured him into that consulate, murdered him, and cut up his body and disposed of it

"I believe the Trump administration will do something, the president has said that," Rubio told CNN. "But if he doesn't, Congress will, that, I can tell you, with 100 percent certainty.

"With almost full unanimity across the board, Republicans and Democrats, there will be a very strong congressional response if, in fact, Saudis lured him into that consulate, murdered him, and cut up his body and disposed of it," he added.

On Sunday, the Saudis promised to retaliate against any sanctions issued against it with “greater punishment”.

The Saudi public prosecutor said on Saturday that any Saudis found "sharing or spreading rumours or fake news that might affect public order and security" would be at risk of a five-year prison sentence and 3m Saudi riyal ($800,000) fine.

Khashoggi was visiting his country’s consulate in Istanbul to obtain proof of his divorce so he could marry his fiancée according to Turkish law.

Turkish sources said that 15 Saudis arrived in Istanbul on the day of Khashoggi’s disappearance and were involved in his apparent murder.

On Monday, the Sabah Turkish daily, which is close to the government, reported that the Saudis rehearsed their operation the day before Khashoggi’s disappearance.

They wanted to see if a black vehicle that Turkish authorities now deem highly suspicious would fit in the consulate’s underground car park, the paper reported. 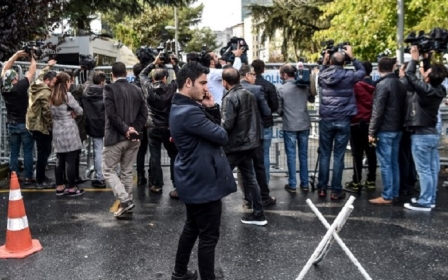