IS turning to child soldiers as desertions rise, US says

Children increasingly fighting alongside adults, US says, as politicians call for IS atrocities to be labelled 'genocide' The Islamic State (IS) group is relying more heavily on child soldiers as growing numbers of fighters desert the hardline organisation, the United States said on Monday.

That may indicate the group's leaders are "struggling with their ability to recruit and retain manpower," State Department spokesman John Kirby said.

"Now we get more reports about them using children in actual engagements side by side with adult fighters," he added.

"All those are good indications they are struggling with their ability to recruit and retain manpower."

However, the United States still considers the threat from IS "very seriously," Kirby said. "They are still very lethal."

US forces have led a military coalition of 60 countries fighting IS for nearly two years.

Also on Monday, US politicians voted to label IS atrocities in Syria and Iraq "genocide", and called for a Syrian war crimes tribunal to be set up under United Nations authority.

The House of Representatives unanimously passed a non-binding resolution pressuring US President Barack Obama's administration to call attacks against Christians, Yezidis and other minorities "war crimes, crimes against humanity and genocide."

The State Department has so far declined to use that label.

In a second measure, representatives voted 392 to 3 for a resolution urging the White House to urge the UN Security Council to immediately establish a Syrian war crimes tribunal, calling actions by the Syria's government and others "gross violations of international law amounting to war crimes and crimes against humanity".

"What is happening in Iraq and Syria is a deliberate, systematic targeting of religious and ethnic minorities," said House Speaker Paul Ryan, a Wisconsin Republican.

"Today, the House unanimously voted to call ISIS's atrocities what they are: a genocide."

Congress has set a 17 March deadline for the State Department to formally decide whether to issue a comprehensive genocide designation, although it is expected to miss that date.

Kirby said that Secretary of State John Kerry would reach a determination "soon".

Foreign Affairs Committee Chairman Ed Royce, a Republican from California, urged the White House not to "drag out" a decision.

"ISIS is guilty of genocide," he said.

"It has been using mass murder, beheadings, crucifixions, rape, torture and enslavement in its deliberate campaign to eliminate religious minorities and bulldoze their history."

He pressed the Obama administration to "seek accountability for Bashar al-Assad's heinous war crimes against his own people," noting that more than 18,500 children were among the hundreds of thousands of people killed in the brutal conflict.

During the debate, representatives called for establishing an ad-hoc or regional tribunal as opposed to one at the International Criminal Court (ICC).

Past courts, including for Sierra Leone, Rwanda and the former Yugoslavia "have made a significant difference holding some of the worst mass murderers to account with successful prosecutions followed by long jail sentences," Republican Representative Chris Smith said.

"The ICC has operated since 2002 but boasts only two convictions."

Kirby would not confirm reports that Kurdish peshmerga forces in northern Iraq had captured a US citizen who defected from IS.

"We are working closely with the Iraqi and Kurdish authorities to try to get more information to confirm the veracity of these reports," Kirby said.

However, "more and more" defectors are leaving IS's ranks, prompting the group to rely more heavily on child soldiers, the spokesman added.

"Originally, they would rely on children for intelligence streams, getting information ... and then using them to conduct suicide attacks, which they still do," Kirby said. 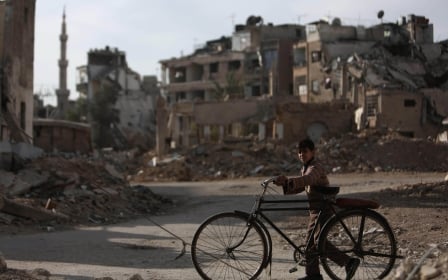