Fighting intensifies in last remaining eastern city out of the LNA's control with around 150,000 residents caught in the crossfire Two suicide bombers on Tuesday hit forces loyal to Libyan military commander Khalifa Haftar, who is leading an assault on the eastern city of Derna, a spokesman for his forces said.

The explosions were heard across the city as the bombers hit the southern Chiha district, spokesman Khalifa al-Abidi said.

Abidi did not give a toll for the attacks but said civilians were among the casualties as the roof of a family home collapsed.

Derna is currently held by the newly formed Derna Protection Forces (DPF) - formerly known as the Derna Shura Council - which has controlled the city since ridding it of the Islamic State group in 2015.

Since 2016, Haftar’s LNA forces have besieged Derna, which is home to around 150,000, and since 7 May, have moved in to take the oil-rich coastal city, the only one in the east outside of his control.

His forces have long claimed that the DPF is a “terrorist organisation” - a term that critics accuse the LNA of giving to all its rivals – and now say they are in the final stages of the offensive.

The LNA, said Abidi, is "advancing steadily to liberate a very small remaining pocket before liberating the whole of Derna".

He said "terrorists" were "resorting to suicide attacks after they failed to tackle" the LNA conventionally.

Haftar is the dominant figure in eastern Libya, where he is aligned with the House of Representatives, an administration that opposes the internationally recognised government in the capital, Tripoli.

He enjoys the support of the UAE, Russia and France as well as Egypt, which sees the LNA as limiting the influence of Islamic groups in the country, including the Muslim Brotherhood.

The fighting in Derna has risked derailing UN-led efforts to reunify Libya and hold elections in the country, though taking the city would give Haftar control if polls are held later on this year.

He and his forces have been accused of war crimes for operations carried out in the east of the country in areas under their control.

An activist in Derna told MEE last month that while the LNA claims to be routing militants from the city, it did nothing to free the city from IS, and is now terrorising residents.

“Even the word ‘army’ sparks terror among us now,” said the activist, who goes by the name of the Lioness of Derna on social media. “The LNA is exactly like the Islamic State to us.”

"We are under siege, being choked, even the hospitals don't have enough oxygen and other supplies," she said.

Human rights groups have appealed for all parties to save civilian lives as the LNA advances.

“We are receiving horrifying reports from Derna, where a prolonged siege and heavy fighting have left the city on the brink of a humanitarian catastrophe,” Heba Morayef, Amnesty’s Middle East and North Africa director, said in a statement

Rival governments in Tobruk and Tripoli, as well as local actors and armed groups, have been vying for control of the country since the start of the civil war in 2011. 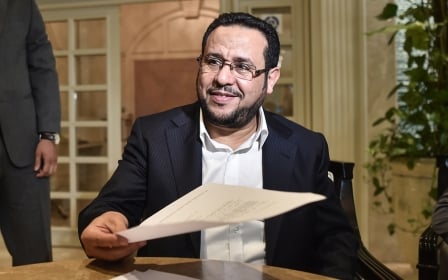