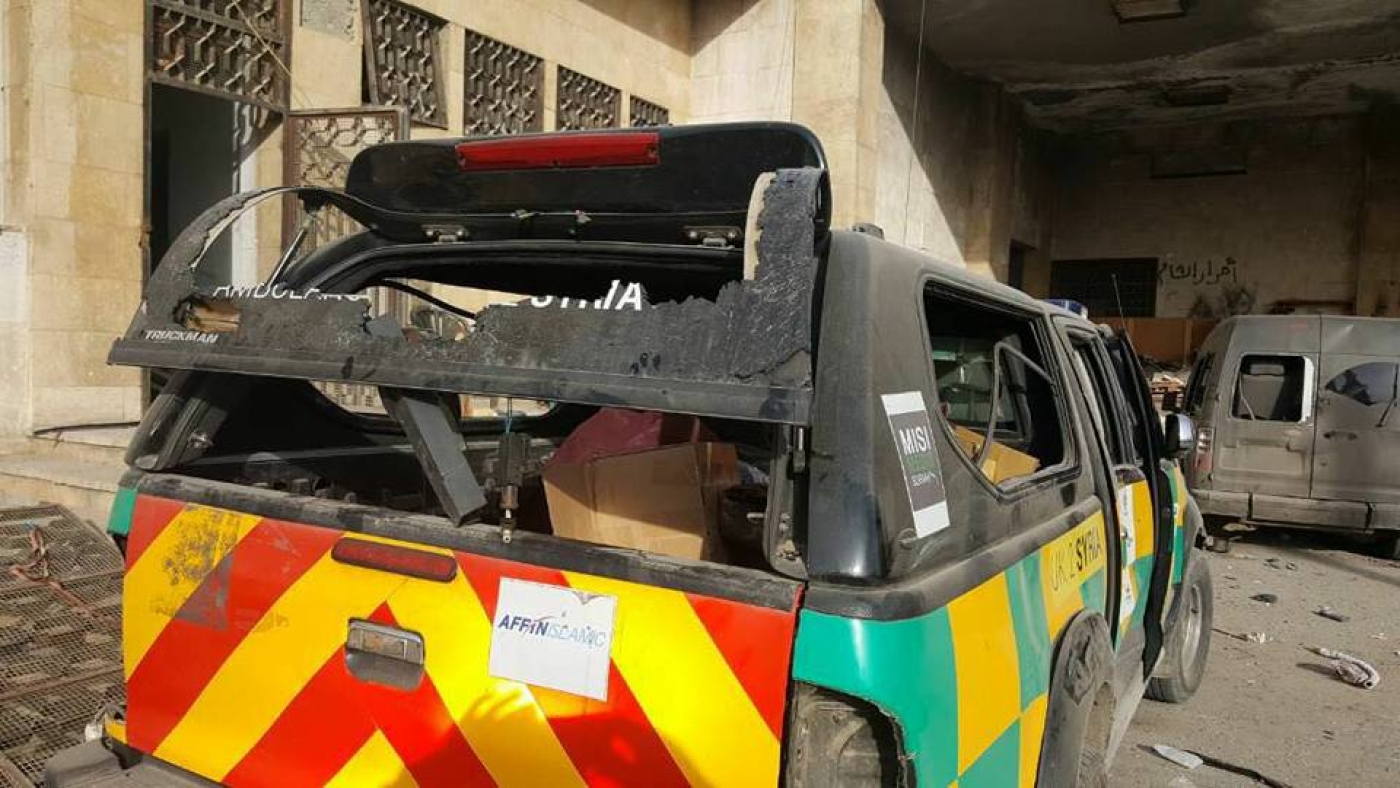 A British coalition of charities has vowed to press on with relief efforts in Syria after a medical facility they sponsored came under aerial attack late last week.

Unity Convoy said that the strike on Friday night in Idlib City in northern Syria killed two civilians, one of whom was a medic, and left six ambulances immobilised.

The charities have not been able to confirm who was responsible for the attack.

The ambulances were part of what had been called “the world’s longest ambulance convoy”, a group of 100 ambulances driven from the UK to Syria earlier this year by charities operating under the umbrella of Unity Convoy, including the UK-based Human Aid, Hand in Hand for Syria and Anaya Aid.

Unity Convoy told MEE that the ambulances had already saved hundreds of lives since arriving in Syria in June.

“The direct bombing of our ambulances is an outrage," said Alim Shamas, Unity Convoy spokesperson. "This type of attack only renews our conviction to continue with this work. We have already offered replacement ambulances as a result of this atrocity.”

Salman Khayyat, a local resident who lives a few roads away from the site of the attack, said: “I was on my way home when the plane threw its bombs. People were running, there was a huge explosion when the bomb landed and smoke everywhere. I can’t understand why a medical facility was targeted. People are dead. Where is the justice?”

In June, MEE reported that Unity Convoy ambulances were called into action a day after entering Syria when an explosion rocked a marketplace in Idlib City, killing three people and injuring several others.

Some have called Idlib City - part of the last rebel stronghold in Syria - “the new Aleppo” because of the dire humanitarian situation that has arisen from intense fighting on the ground between the Syrian government and rebel forces and bombing from above.

Unity Convoy was conceived at the start of the year after Syrian and Russian air strikes targeted several large hospitals in eastern Aleppo and destroyed 100 ambulances belonging to convoy partners.

According to Physicians for Human Rights (PHR), a US-based organisation which uses medicine and science to document mass atrocities and human rights violations, 478 medical facilities have been attacked since the start of the war in 2011, with 312 attacks launched by the Syrian government and its allies.

PHR figures also show that over 800 medical personnel have been killed since the start of the war, with 48 deaths in this year alone.

Leaders of charities which fall under Unity Convoy spoke out against the attack and called on the humanitarian community to do more to help Syrian civilians.

“This horrific targeting of innocents further proves the need for foreign aid," said Dr Moustafa Manaam from Idlib Health Directorate, one of Unity's Syria partners. "Our internal aid has been cut off and we are completely reliant on the outside world. We are calling on the world to keep on giving.”

Anaya Aid's CEO Tahir Malik said: “Each time an ambulance is destroyed, whether it is targeted or in an indiscriminate attack on civilian areas, it deprives Syrians of another lifeline.”

The attack comes as MEE reveals that British aid workers working in Syria have had their citizenship revoked by the UK government.

In letters which were recently sent to the families of two aid workers, Home Secretary Amber Rudd said they were assessed to “present a risk to the national security of the United Kingdom”. A third was accused of “Islamist extremist activities”.

All three deny ever fighting in Syria and have never been charged with any offence in the UK relating to their activities in the country.

The revelation will add to claims by the humanitarian community working in Syria - many of whom are British Muslims - that their work has become criminalised in recent years.

British Unity Convoy volunteers complained of police “harassment” in April as they set off on their trip despite the fact that they had told authorities that it planned to go only as far as Bulgaria, where the ambulances would be handed over to partners.

Volunteers told MEE that police had visited them in their homes and warned them not to go into Syria, while others said they were stopped and detained under far-reaching anti-terrorism powers known as Schedule 7 at the Port of Dover, before being released without charge.

The Charity Commission told MEE in April that “it does not support the use of aid convoys as an effective or safe way to deliver aid".