In the province of Fayoum, south of the capital, violence erupted after Morsi supporters staged a protest following Friday prayers, leading to the death of a 19-year-old student.

The exact cause of the student's death was not immediately clear, said health ministry official Medhat Shukri. He added that three policemen were also wounded in the clashes.

Another person was killed when pro-Morsi protesters clashed in the Ain Shams district northeast of Cairo with residents opposed to the Muslim Brotherhood leader, who was toppled by the army last year in a popularly-backed military coup.

Two other people were wounded in the clashes which erupted after the protesters fired birdshot and live rounds at Ain Shams residents, a Cairo police official said.

The official Muslim Brotherhood Twitter account tweeted a photo of what it said was a protest in Nasr City “at the heart of Cairo”.

Security officials said that 13 people who took part in protests Friday in support of Morsi were arrested, including five in Fayoum who were found in possession of petrol bombs.

Supporters of Morsi still attempt to stage protests demanding his reinstatement, but their rallies have dwindled amid a deadly government crackdown since the army seized power last year.

At least 1,400 people have been killed in the crackdown, while more than 41,000 have been jailed, according to Egyptian monitoring group Wikithawra and hundreds sentenced to death in highly controversial trials.

Authorities have tightened security around universities at the beginning of the new academic year, with students having told MEE of “humiliating” procedures being implemented at dorms to stifle political activism. 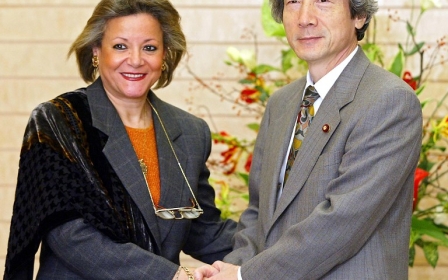