Houthi rebels attacked the home of Yemen’s National Security Chief on Saturday, killing one soldier in the process.

Two insurgents also died in the assault on Ali al-Ahmadi’s home in the upscale Hadda neighbourhood of Sana’a, while clashing with presidential guards defending the complex.

The gunfight lasted around three hours, and a number of Houthis were captured, according to rebel sources.

The attack was reported shortly before the Houthis signed the final part of a UN-brokered deal with President Abd Rabu Mansur Hadi which demands that all parties stop acts of violence and disarm.

Analysts, however, have pointed out that the violence earlier in the day seem to indicate the ineffectiveness of the disarmament deal.

The Houthis, who first began protesting in the capital a month ago, are now effectively in control of much the capital.

They have a strong presence in the northern part of Sana'a, which is home to most ministries and public buildings.

However, the rebels are yet to establish a significant presence in southern Sanaa, where the presidential complex is said to be protected by four brigades that guard the palace and nearby hills.

The lightening takeover of Sana'a by the Houthi rebels, who faced little resistance from government forces remains perplexing, observers say. Interior Minister Abdo al-Tarib urged forces not to confront the rebels as they swept across the capital with sources close to the presidency telling media that the role for ousted president Ali Abdullah Saleh might have had a hand in turning the army and security chiefs against Hadi.

Saleh, who stepped down in February 2012 following nationwide protests, is accused of collaborating with the rebels by using his clout among army chiefs, the sources have said.

Military sources said the rebels aim to smoothly bring army bases in Sana'a and other regions under their control by securing the cooperation of top officers.

Hadi has so far failed to name a new prime minister as stipulated by an agreement to end the fighting, which was mediated by UN envoy Jamal Benomar and signed hours after the rebel takeover on Sunday.

Yemeni authorities have repeatedly accused Iran of backing the rebels, who also appear influenced by Lebanon's powerful Shiite militia Hezbollah, which is supported by Tehran.

Reports also came in on Saturday that a mortar had been fired in the vicinity of the US Embassy in Yemen.

Ansar al-Sharia, a local offshoot of Al-Qaeda in the Arabian Peninsula, claimed responsibility for the attack via their twitter feed.

On Friday it was reported that the US government had ordered a cut in the number of American government staff in Yemen.

"We are taking this step out of an abundance of caution and in response to recent political developments and the changing, unpredictable security situation in Yemen," State Department spokeswoman Jen Psaki said.

Psaki said the US embassy would continue to operate with reduced personnel.

An updated US travel warning said the "security threat level in Yemen is extremely high," and urged all American citizens in the country to leave, warning the embassy may only be able to give them limited assistance if they get in trouble.

In 2012 hundreds of Yemeni demonstrators stormed the US embassy compound in Sana'a in protest at a film they consider blasphemous to Islam. Inside Yemen
Journalists in Yemen seek protection from Houthis 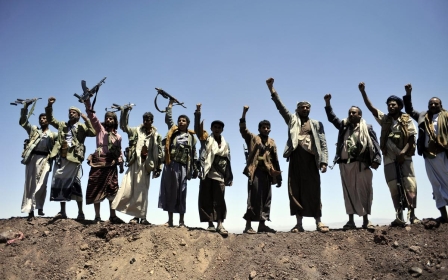 Inside Yemen
Yemenis are shocked by Houthis' quick capture of Sana'a