Iran's supreme leader accused the United Arab Emirates of betraying the Muslim world with its decision to normalise relations with Israel.

Ayatollah Ali Khamenei said in a televised speech on Tuesday that the deal, which Palestinians referred to as a "stab in the back", would disgrace the UAE "forever".

"Of course, the UAE's betrayal will not last long, but this stigma will always be remembered," he said.

"They allowed the Zionist regime to enter the region and forgot Palestine. The Emiratis will be disgraced forever... I hope they wake up and compensate for what they did." Israel's flight to the UAE: Taking the Emirates for a ride
Read More »

Iranian authorities harshly criticised the US-brokered deal between the UAE and Tehran's longtime foe Israel, with some officials warning the UAE and Israel fostering closer ties risks igniting a firestorm in the region.

Immediately after the deal's announcement, Iranian President Hassan Rouhani said it was a "big mistake" and warned against allowing Israel a "foothold in the region".

"That kind of rhetoric is counterproductive to peace in the region," Musharakh said.

Palestinians were dismayed by the UAE's move, worried it would weaken a long-standing pan-Arab position that only an Israeli withdrawal from occupied territories and acceptance of Palestinian statehood would allow for normal relations with the Arab countries.

While the Emirates has stated that the deal was predicated on Israel freezing its plan to annex large swathes of the occupied West Bank, Israeli Prime Minister Benjamin Netanyahu has repeatedly said that annexation is still on the table.

Israel and the UAE are expecting economic and enhanced security benefits from normalisation, the first such accommodation between an Arab country and Israel in more than 20 years, largely forged through their shared distrust of Iran.

On Saturday, the UAE announced it was scrapping its economic boycott of Israel, with officials from the two countries saying they are looking at cooperation in defence, medicine, agriculture, tourism and technology as part of the deal.

Two days after the deal was signed, the head of Israel's Mossad intelligence agency visited the UAE for security talks.

In recent years, the UAE has held quiet talks with Israel and allowed Israelis with second passports into the country for trade and talks.

The UAE's foreign minister recorded a message for the Palestinian diaspora living in the Emirates on Monday, the day of the first commercial flight between Israel and the Emirates.

Sheikh Abdullah bin Zayed al-Nahyan said the UAE was still committed to "establishing an independent Palestinian state with East Jerusalem as its capital".

"We will continue to support the Palestinian cause based on our historic stance that stems from a deeply rooted, unshakable belief that will never change as a result of any considerations," he said. 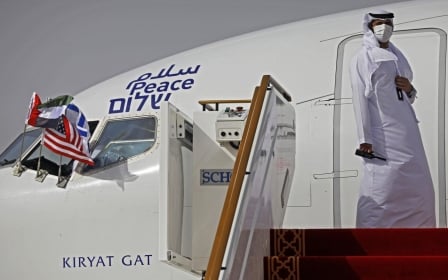