Saudi Arabia, UAE, Bahrain and other Arab nations have abruptly severed diplomatic ties with Doha, blocking their borders and airspace to nationals and flights from the tiny Gulf kingdom.

Opposing the UAE's new policies against Qatar, which Al Shamsi said were taken for the country’s interests and national security, could be punished by up to 15 years in jail, Emirati Arabic news website Albayan reported.

Saudi Arabia's foreign minister said on Tuesday the damage caused by economic measures taken against Qatar should convince it to change its policies.

"We believe that common sense and logic and will convince Qatar to take the right steps," Adel al-Jubeir told reporters in Paris.

"The decisions that were made were very strong and will have a fairly large cost on Qatar and we do not believe that Qataris want to sustain those costs."

Later on Tuesday, AlArabiya reported that al-Jubeir also said that cutting ties with Qatar is a result of its failure to stop supporting “hostile media”.

Since the crisis began, 85 percent of Qatar’s imports, including food trucks from Saudi Arabia, have been blocked.

The harsh measures, imposed during the Muslim holy month of Ramadan, have prompted empathy for Qataris from fellow Gulf citizens.

The news of outlawing social media support for Qatar sparked ridicule on Twitter.

“Be aware even in prayers,” wrote one user. “When you pray for Muslims, don’t forget to leave out Qataris.” 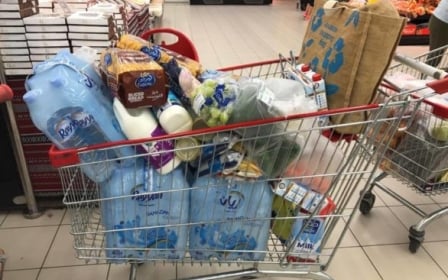