A still from "How a Terrorist Thinks" (YouTube)
By
MEE staff

The majority of people promoting "jihad" online are using political rather than religious arguments, according to a study by two UAE-based think-tanks.

The report, by the Abu Dhabi-based Future Centre and the al-Mesbar Centre in Dubai, was released as a video called "How a Terrorist Thinks".

The study analysed 45,000 Arabic-language Twitter posts by individuals who have either perpetrated terrorism attacks or were involved in training for such attacks, as well as 789 YouTube videos and numerous blogs.

According to the study, 59.7 percent of those made purely political arguments in their propaganda, rather than religious arguments.

"In other words, 78.3 percent of polemics... are essentially non-religious and and prinicipally sociopolitical," concludes the study.

It also noted that the rejection of "Zionism" only appeared in 3.7 percent of the material studied, while direct attacks on Israel did not feature at all.

The authors said they had chosen the video medium specifically to challenge militant groups’ own propaganda methods.

“Terrorists have been better at communicating with the public than civilised peoples struggling against them. It's time to beat them at their own game,” said Mansour Alnogaidan, the executive director of al-Mesbar Centre.

"The organisation’s media strategists are producing high definition depictions of the most abhorrent brutality on an industrial scale, ensuring that jihadism is digitalised and brought firmly into the 21st century," wrote Charlie Winter, a former analyst for the Quilliam Foundation, in a report last year.

"The days when we saw grainy video footage played on al-Jazeera and propaganda was limited to stagnant speeches made by terrorist leaders are long gone.

"Islamic State has revolutionised jihadist messaging, by jettisoning operational security in the pursuit of dynamism, so that it can produce propaganda that tells a story, exciting or appalling its viewers, depending on who they are." 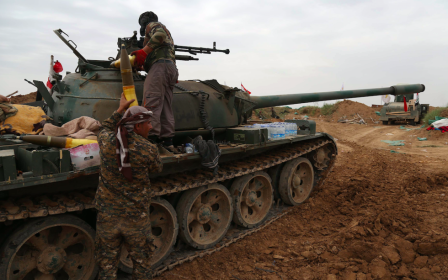