Uber CEO Dara Khosrowshahi during a keynote at the start an Uber products launch in San Francisco, California on 26 September, 2019 (AFP)
By
MEE staff

Uber CEO Dara Khosrowshahi has tried to backtrack after comparing the killing of Saudi journalist and US resident Jamal Khashoggi to deaths caused by Uber’s self-driving cars.

In an interview with Axios on Sunday, Khosrowshahi suggested that Khashoggi's murder was “a mistake” by the Saudi government.

“I think that people make mistakes. It doesn't mean that they can never be forgiven," he said.

According to Axios, Khosrowshahi contacted the online media platform an hour after the interview expressing regret for the language he used.

"I said something in the moment that I do not believe,” he said in a statement. “When it comes to Jamal Khashoggi, his murder was reprehensible and should not be forgotten or excused."

Khosrowshahi was one of those who pulled out of Saudi Arabia’s annual Davos in the Desert conference in October 2018 following Khashoggi’s death.

He did not attend the 2019 conference either, but claimed it was due to its overlap with a board meeting, rather than an ethical stance related to the murder.

Saudi Arabia owns more than 10 percent of Uber, making it the fifth largest shareholder in the ride-hailing company.

Saudi investment in Uber Technologies Inc., nearly at $3.5 billion, has been described by Bloomberg as “the largest single investment from a foreign government to a venture-backed startup ever.”

Yasir al-Rumayyan, the managing director of Saudi Arabia’s Public Investment Fund, is among the company's nine board members.

Khosrowshahi praised Rumayyan as a “very constructive board member.”

Khashoggi, a regular contributor to the Washington Post and Middle East Eye, was killed on 2 October 2018 in Saudi Arabia's Istanbul consulate.

Despite the outcry from advocates and lawmakers, US President Donald Trump has strongly defended Saudi Crown Prince Mohammed bin Salman, who the CIA has said ordered the murder and dismemberment of Khashoggi.

The Saudi government has vigorously denied his involvement. Trump has said he would not compromise Washington's relationship with Riyadh, including hefty weapons contracts, because of the killing. Khashoggi
Cameron, Will.i.am and the elite financiers at 'Davos in the Desert' 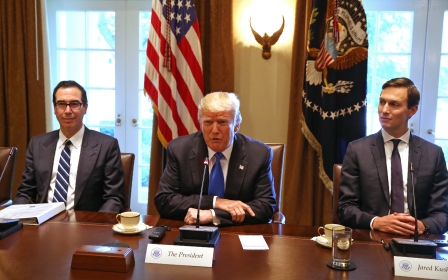