The UN says there are 20 million weapons in Libya, a country of six million people (AFP)
By
Graeme Baker

British defence officials are considering basing military trainers in Libya and sending another warship to the Mediterranean after the EU agreed to boost an anti-people smuggling operation and enforce a UN arms embargo.

The EU said on Monday it would extend Operation Sophia's mandate by one year to July 2017, and improve its capacity as per a UN resolution, as the EU tries to control the flow of weapons into Libya and refugees heading to Europe from its shores.

It comes after the British Prime Minister David Cameron said last month that the UK would "take an active leadership role in that process".

A spokesman for Britain's Ministry of Defence told Middle East Eye on Monday the UK was considering stationing military personal in Libyan ports to train the Libyan coastguard, as well as basing another Royal Navy warship off its coast.

"We would want to do coastguard capacity training closer in, maybe even in port, so that you are not steaming around in a massive ship when you are trying to train handfuls of people.

"It is one of the options - a small training team of the right people," the spokesman said. "If we were to do coastguard training in-port, it probably means very small, discrete 'packages' - nothing that could be labelled boots of the ground. There would be no offensive capability.

"The other option is you take a ship there, rather like we did off Somaliland and you do it just off the coast. A lot of that will depend on the risks associated."

Defence officials were also considering basing another Royal Navy warship in the Mediterranean to intercept weapons shipments to groups such as the Islamic State (IS), and others which oppose the new unity government in Tripoli.

That, the spokesman said, would mean re-assessing the current missions being undertaken by the navy, which is already contributing to several missions in the Mediterranean and greater Middle East area.

The spokesman added that the British government would need a clear idea of what the Libyan unity government needed before committing.

"What we need to know is what the Libyans want from us, and I don't think we have had that in any way that is actionable."

Any new training team would however add to British military assets already operating - mostly in secret - in Libya. MEE reported in March that the British SAS had been operating in coordination with Libyan fighters against the IS group.

Libyan militias aligned with the new UN-approved unity government in Tripoli are currently advancing on the IS stronghold of Sirte, although the group has launched counter-attacks over the last week.

The EU launched Operation Sophia last year after hundreds of migrants died when their boats sank off southern Italy, sparking popular outrage at their plight.

Cameron's promise top "take active leadership" came on the day hundreds more were reported lost in a shipwreck off the coast of Libya.

The UN Security Council earlier this month passed a resolution allowing the mission to operate in Libyan waters, on confirmation by Tripoli.

What additional capacity is added will be decided by the end of July, according to EU officials. 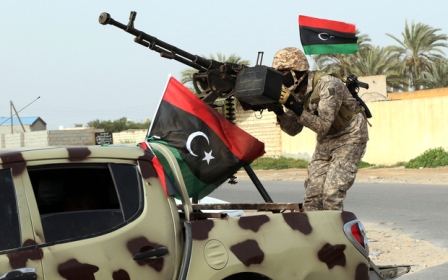